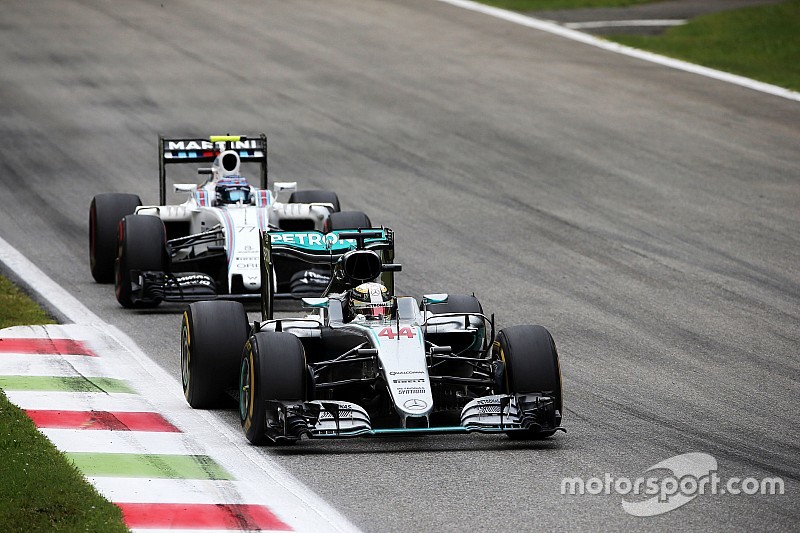 Lewis Hamilton says that the characteristics of Formula 1's current tyres left him unable to mount a fightback against Nico Rosberg to try to win the Italian Grand Prix.

The world champion suffered a terrible getaway at Monza as he dropped from pole position to sixth place on the first lap as Rosberg pulled away in the lead.

Although Hamilton was able to recover positions, he found himself unable to close down enough of the 15-seconds advantage that Rosberg had managed to open up.

And having been so dominant in qualifying, when he took pole position by nearly half a second, Hamilton said that the behaviour of F1's degrading tyres meant that if he had pushed to chase Rosberg then he would have used up all his rubber.

"It [the gap] was 15 seconds at one point, and I brought it down to 9-10s or something like that," he said. "But unfortunately that's too big a gap to close with the tyres that we have. For performance, I had to make it to the end of the race.

"It soon became not a race with Nico, it became a race of making sure I stayed ahead of the guys behind and didn't lose any more points."

Ask to explain in more detail the balance between being able to push hard while also looking after tyres, Hamilton said: "I could have kept going at the pace that I was going, maybe it would have brought the gap down to 6 seconds, maybe. It's still not enough to win the race.

"To close a 15-second gap, you're going to have to go several tenths quicker, three-four probably, over that span of time, and you're not going to have any tyres left at the end of it. That's a big question.

"I might have, I might not have, but for sure if I had ever closed the gap I wouldn't have had tyres to get past at least.

"If I was eight seconds behind from the beginning, then I would have closed the gap. Then I would have put some pressure on, and maybe been in a better position. But 15 seconds is a long, long way to come back with the way the tyres are today.

"Nico drove a great race. He was obviously faultless and did what he had to do. Once you're out in front here, it's relatively plain and simple, keeping the car on the track.

"Falling back to fifth, I used so much of my tyres just to get back through the field. When they told me he was 15 seconds ahead… It was the whole back straight, 10 to 11 seconds. I couldn't even see Nico.

"All he had to do was match some of my times, and he was sorted. If we had better grip and I could push like a qualifying lap every lap, that would be awesome, but it's not been the case for a long time."

Verstappen says bad start was because of team error

Tech debrief: Why Mercedes was a league apart at Monza