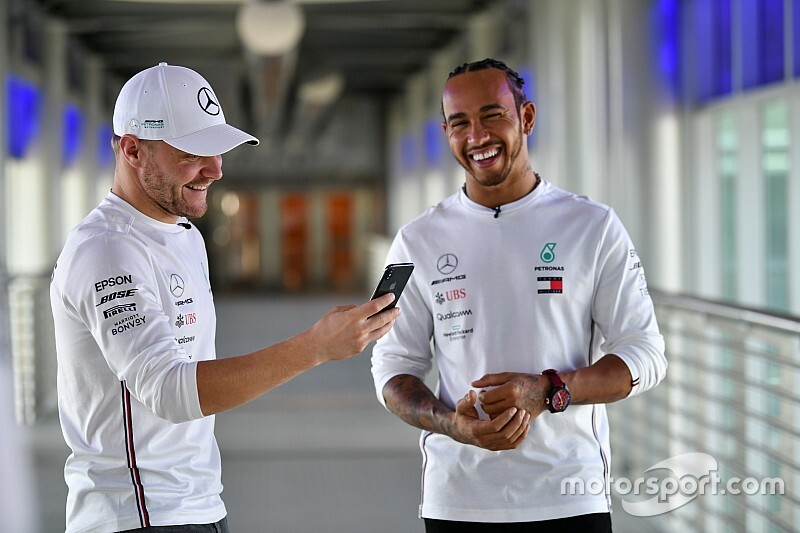 Mercedes has a “sensational driver line-up” in Lewis Hamilton and Valtteri Bottas that is competitive without compromising the team’s objectives, says its Formula 1 boss Toto Wolff.

Six-time world champion Hamilton and multiple race winner Bottas have been paired together since 2017, when Bottas was picked to replace retired world champion Nico Rosberg.

Bottas and Hamilton have a very amicable relationship, helped by Bottas not challenging Hamilton over a full season in the way Rosberg was able to – while still doing more than enough to secure Mercedes’ three straight constructors’ world championship, and finish second in the drivers’ championship this year.

Wolff said in an end-of-season Mercedes video that the wider team objectives are always respected, despite flashpoints like Hamilton and Rosberg crashing into each other, if teams “embrace” the fact drivers will have a selfish goal to be world champion.

“That can create some tension because these objectives are not always aligned to the team objectives,” said Wolff.

“What I'm really proud of is that over all these years, we have always managed to get the drivers behind the teams objective and behind Mercedes' target to be one of the most successful sports teams in the world.

“And you can see we've had our ups and our downs. But fundamentally, the drivers have been a really strong, contributing factor to all of our success.

“Valtteri and Lewis work really well together. They have been pushing each other.

“I think both of them had a decent season. Obviously, Lewis won the championship but Valtteri was always there, won a handful of races, and I think has grown as a racing driver.

“And this is a dynamic that is really positive for the team. In that respect, I believe that we have a sensational driver line-up going forward.”

Mercedes has overcome sterner challenges from Ferrari over the past three seasons, including the loss of the engine performance advantage that underpinned its early success in the V6 turbo-hybrid era.

Its response has been to up its game on the chassis side, which meant even in the sixth year of the engine rules Hamilton and Bottas still swept to 15 wins from 21 races.

Wolff said that as well as the right drivers, balancing the rest of the team was key to Mercedes’ enduring success.

“I think there is a reason why there's not many sports teams out there that have won many consecutive championships,” he said.

“You need to keep the team together. But equally, be aware that this is a dynamic structure that needs to evolve.

“You need to look at the levels of motivation and energy of the team members.

“You need to keep the seniority and the know-how in the team, but equally don't create the bottleneck for talent that's coming up.

“And this transition and motivation factor is something that I think we have managed well. It’s something that is certainly very difficult and this is why it wasn't done before.”

2019 tech verdict: How Williams struggled from the start

The tragedy that forced Ferrari's first F1 winner to quit