Lewis Hamilton believes the points gap to Mercedes Formula 1 teammate Valtteri Bottas has been inflated by the Finn's bad luck, calling him "one of the strongest drivers here". 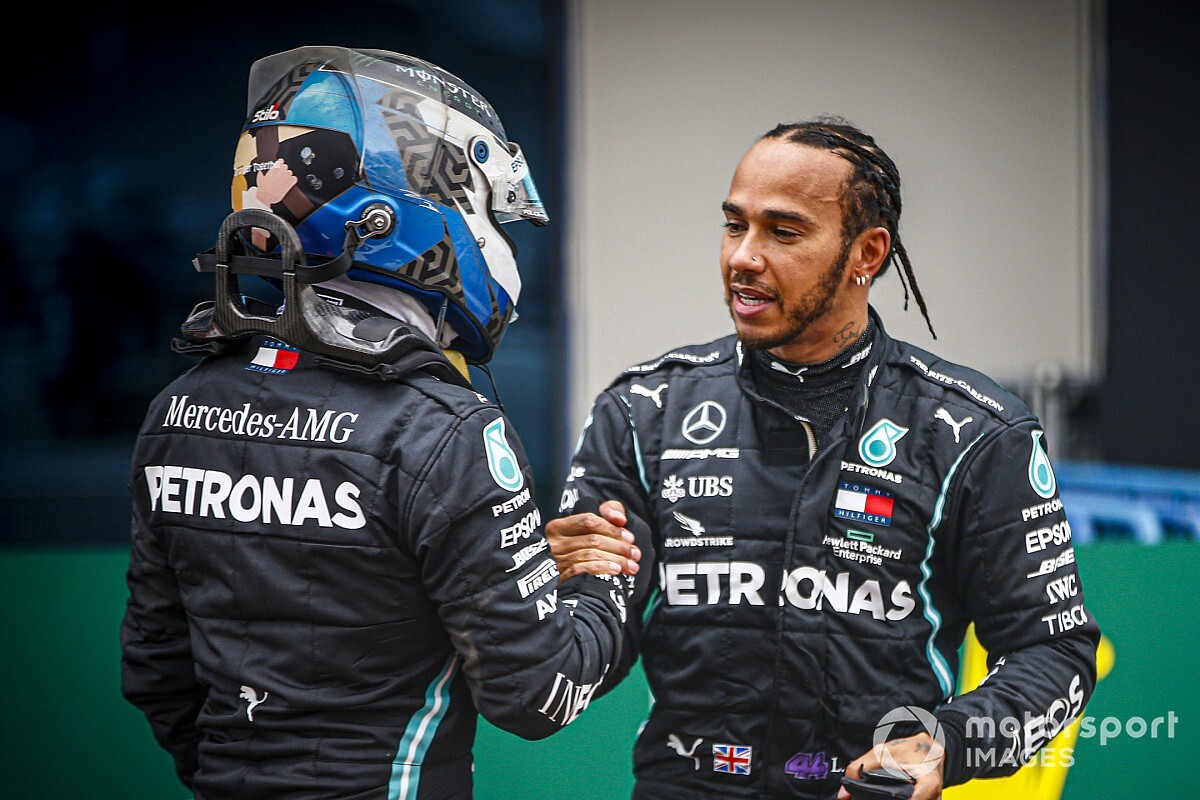 Hamilton clinched his seventh F1 world championship with victory at the Turkish Grand Prix two weeks ago, moving into an unassailable lead over Bottas with three races to spare in the season.

Bottas has struggled to match Hamilton's form throughout 2020, winning just two races compared to his teammate's tally of 10, and was lapped by Hamilton in Turkey.

2009 F1 world champion Jenson Button recently told Motorsport.com he thought Hamilton needed a stronger teammate alongside him if he was going to face any real challenge for the title.

But Hamilton was quick to heap praise on Bottas ahead of this weekend's Bahrain Grand Prix, saying the Finn was "getting stronger and stronger each year".

"The media have commented on '[Bottas] 2.0' and it's so true," Hamilton said. "Every year you can see him just grafting away, chipping away at trying to raise the bar in so many different areas.

"You've seen this year, while yes, the points gap now is where it is, if you look at a lot of the qualifying [sessions], it was the smallest of margins. So closing the gap in qualifying, he has done already, which has made it quite challenging.

"In race trim, naturally, you can see obviously the consistency that I've had this year has [been] really what's made the difference. But if you look on the race weekends, it was so close.

"Of course there's a points gap of seven points [between P1 and P2] and that consistently that over a period of time [adds up].

"Valtteri has also been unfortunate this year with the reliability issues, so it makes it [the points gap] look even bigger than it is."

Bottas suffered a late tyre failure at the British Grand Prix that caused him to finish 11th, and also struggled with damage on his car at Monza where he finished fifth.

A power unit issued caused Bottas to retire at the Nurburgring after leading the early stages of the race from pole position, while he lost close to one second per lap at Imola after collecting debris.

Bottas was also left nursing damage in Turkey following a first-lap clash with Esteban Ocon, contributing to his 14th-place finish.

Hamilton called on the F1 community to give Bottas greater recognition for his achievements, conceding that he was not the easiest driver to go up against.

"When I talk about people needing to give Valtteri his due respect, I think you've got to remember who he's driving up against," Hamilton said.

"It's not easy being my teammate. But he comes in weekend in, weekend out, with just the same mentality. He's never moaning, complaining that something is wrong with the car. It's always just: 'I've got to do a better job'.

"I don't know any other driver that does that here, and I think that's something we share in common, I'd like to think.

"We come into these weekends with a fresh head, and I think, mentally, he's one of the strongest drivers here."