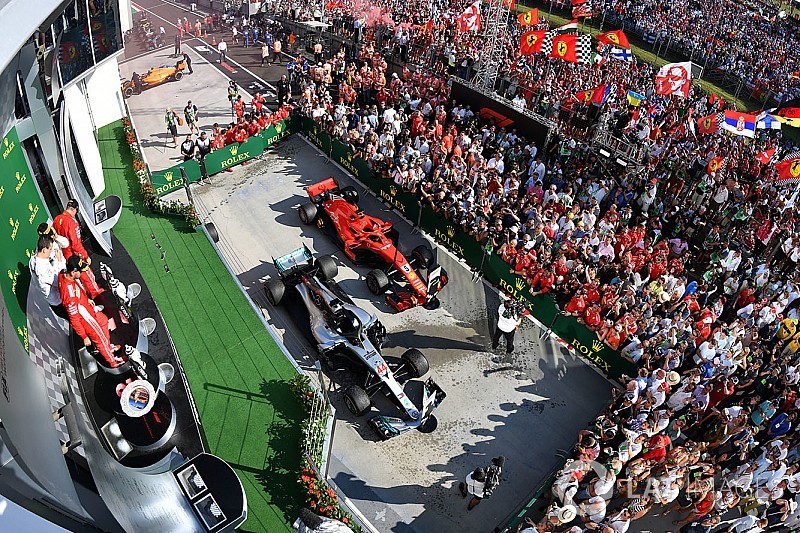 Good morning. Welcome to the morning after a Hungarian Grand Prix that may not have delivered a ton of wheel-to-wheel racing, but did serve up some intriguing battles, some angry radio messages and a bit of a post-race storm in a tea cup. 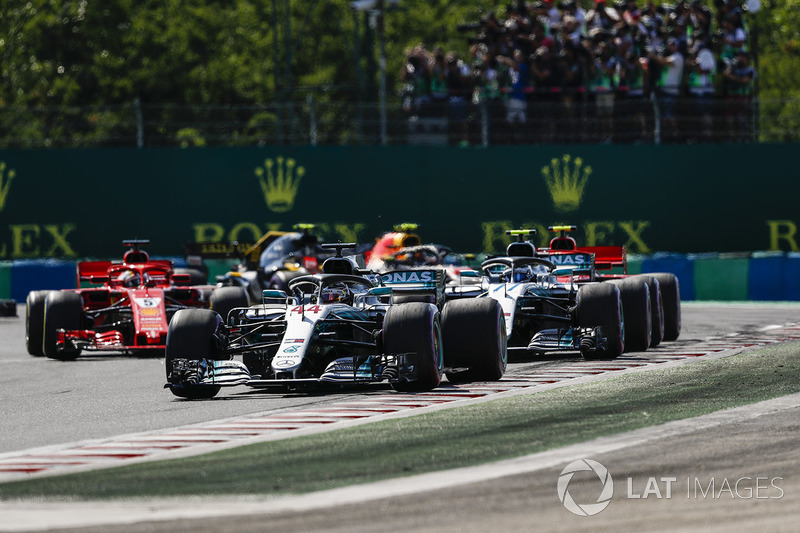 Lewis Hamilton would be the first to admit that Mercedes did not have the fastest car at the Hungarian Grand Prix, but a rain shower on Saturday was all he needed to pull it back into his grasp.

A surprise pole position, a brilliant start and then some great support from Valtteri Bottas to hold off Sebastian Vettel all came together to help Hamilton extend his world championship lead.

But don’t think for a second that Hamilton is ready to sit back and head to the beach to toast his glory.

“I am not really the lay-down-on-beach type,” he said. “I will be doing activities, training and getting ready for second half.

“I am really happy with how strong it has come in the last few races, so grateful for the hard work and continued efforts from the team – they all deserve a break. And I hope they keep pushing.” 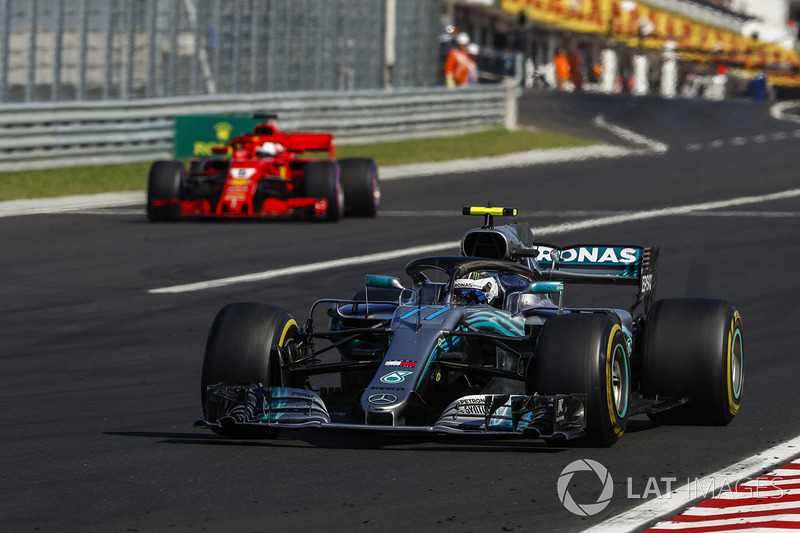 Hamilton’s victory at the Hungaroring owed a great deal to the way that Mercedes teammate Valtteri Bottas was able to fend off Sebastian Vettel for much of the afternoon.

Although rapidly deteriorating tyres meant that Vettel was able to get past near the end, by that stage the gap to Hamilton was too big for Ferrari to think about the win.

After the race, Mercedes boss Toto Wolff praised Bottas as a ‘sensational wingman’ during an interview with Sky.

But that remark did not go down well with Bottas himself, who suggested it was wrong to typecast him as playing just a supporting role to Hamilton.

"First of all wingman hurts," he told TV reporters. "Second of all, I don't see any positives in this race for me. I wanted a better result.”

Wolff later clarified that he meant no harm in his comments, and that there was no suggestion of Mercedes having a number one and number two driver in place.

“In today's race, starting P2, after lap one, Valtteri's race was the perfect wingman race – and I don't mean it in championship terms, because we have no number one, we have no number two, but it was just how he was racing,” he said. 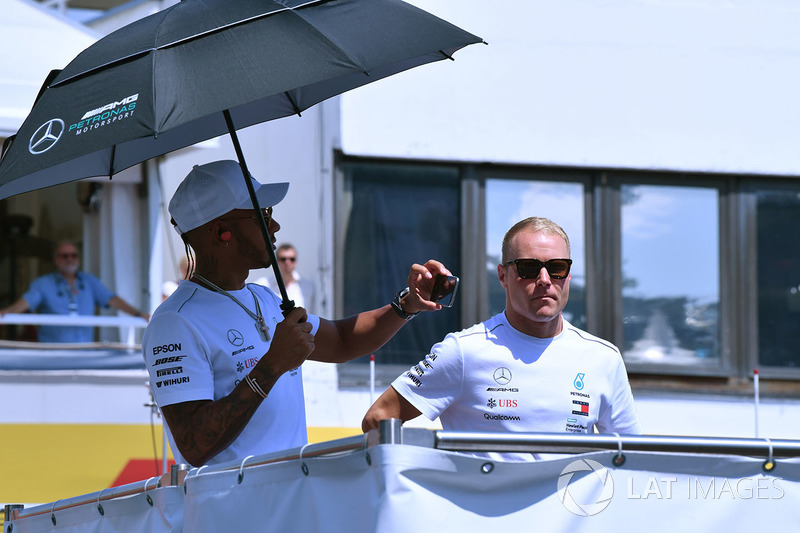 Bottas’s frustrations after the race were amplified by a controversial finish – as there was a minor clash with Sebastian Vettel that broke his wing, and then another moment with Daniel Ricciardo.

The race stewards felt put the Vettel bump down to a racing incident, but it did feel that the bash with Ricciardo was wrong – so it handed him a 10-second time penalty.

Ricciardo certainly felt that the Finn had been too hard in their battle, especially considering his tyres were past their best and he had a broken front wing.

"I feel I did all I could and gave him enough room, but I guess with the damage he went in pretty hard," Ricciardo told Sky Sports F1. "It was definitely over the top."

Vettel was lucky to escape his incident with Bottas without any damage, and went on to finish second. He later said he had no issue with what happened.

"I don't blame him – I think he had no grip and when you're so close it's very difficult to stop the car and I think he locked up and we made contact,” said the Ferrari driver. 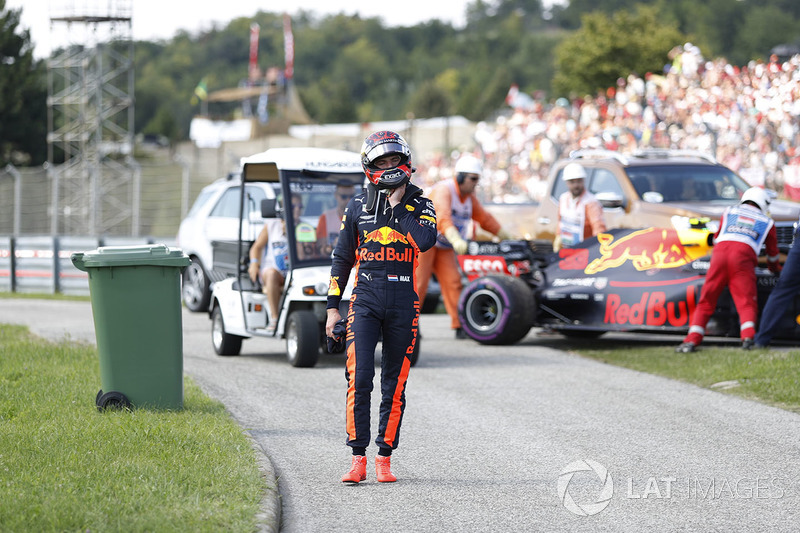 Max Verstappen’s expletive-laden radio message about Renault as he rolled to a halt in the Hungarian Grand Prix made it clear that frustrations with the French car manufacturer are at an all-time high.

The Dutchman had been shadowing the Mercedes and Ferrari cars in the early stages of the Hungarian GP, but a suspected MGU-K failure ended his hopes on lap six.

As his car slowed, he vented his frustrations over the radio: “F**k! What a f**king joke all the f**king time with this s**t, honestly."

Later on, Verstappen appeared not to have calmed down, as he felt it was ‘difficult to accept’ what was happening.

"Honestly, it's just not at all how it should be," he told Sky Sports. "You pay millions as a team for, you hope, a decent engine. But it keeps breaking down. We are also the slowest out there. Honestly at the moment, it's difficult to accept."

Asked about his radio message he said: “I was very angry at the radio. I think there was a lot of beeping out there, which was a shame that they beeped it away, would've been better if they would've allowed it." 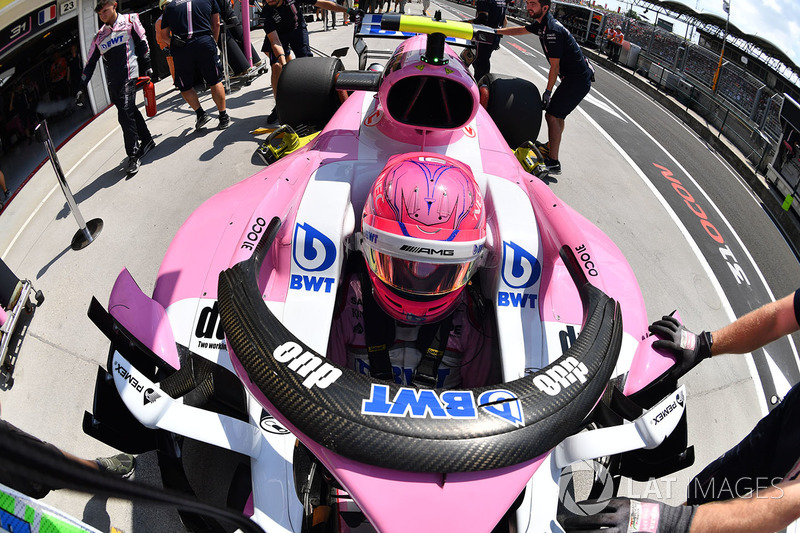 Force India heads into the summer break with an uncertain future – but one in which it hopes new buyers will be found to open up some brighter times.

It was a dramatic Hungarian GP weekend for the team after it emerged that the team had been put into administration by the British courts on Friday evening.

The move was forced upon the team by driver Sergio Perez, who said he had to take the difficult decision to push the button on legal action because otherwise there was a risk of the team going bust.

"I should not really like to be involved in this because at the end of the day I'm just a driver, but it got too much and I was asked by a couple of members of the team to go ahead and save the team,” he said.

"There was a winding up petition from another customer, which would have closed down the team completely. Therefore, I was asked to basically save the team – to pull the trigger and put the team into administration.

"It has nothing to do with my outstanding amounts. The only reason I've done it is to save the team, and for the better future of the team.

The administrators are working urgently to find new buyers and Mercedes, which has been involved behind the scenes, is optimistic that things will be settled soon.

Mercedes boss Toto Wolff said: “There are many potential buyers with great interest, with deep pockets, with an understanding of what kind of spending levels are needed in order to perform in F1.

"It's something that is positive for the team, and for all its employees, I would say. As much as we have to recognise Vijay's effort the last 10 years, we shouldn't forget that."

McLAREN AND TORO ROSSO IN STAND OFF OVER KEY 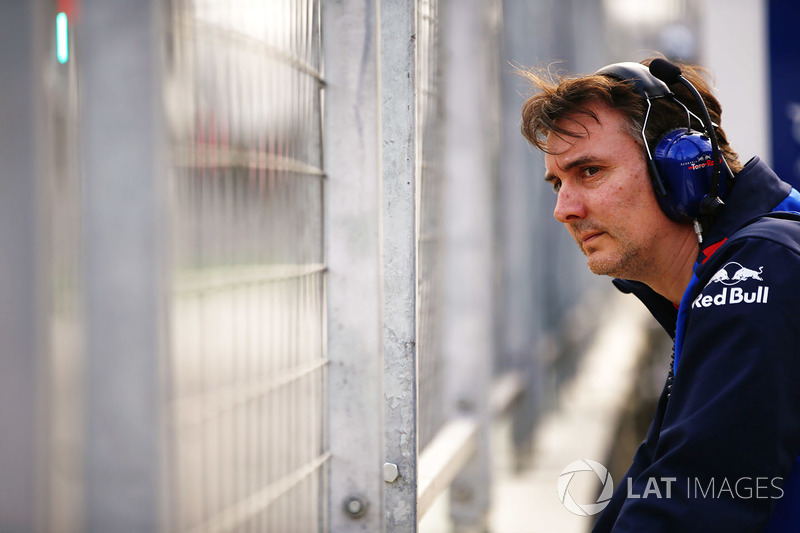 McLaren has signed James Key as its new technical director, but current employer Toro Rosso has warned it may have to wait until the end of his contract in 2020 to get hold of him.

Although McLaren announced Key’s capture ahead of the Hungarian GP, it has not yet made an agreement with Toro Rosso nor Red Bull over when he will be able to start work.

It is understood that McLaren boss Zak Brown was talking to Red Bull about the terms of Key's departure, but those discussions hit a snag when the story went public.

Red Bull motorsport advisor Helmut Marko said: "He has a long-term contract with Toro Rosso. We had a discussion with Zak, and instead of coming back to us, there was a press release done.

"So we'll stick to the contract, and McLaren will have to wait for quite a long time."

Marko made it clear that he expects Key to see out his contract, which is understood to stretch to 2020.

"Of course. There's a contract for quite a long time. Why do we have contracts? We have to analyse the whole situation.

"As McLaren is making press announcements, we have to look seriously at the legal situation. But it's sure we won't release him earlier."