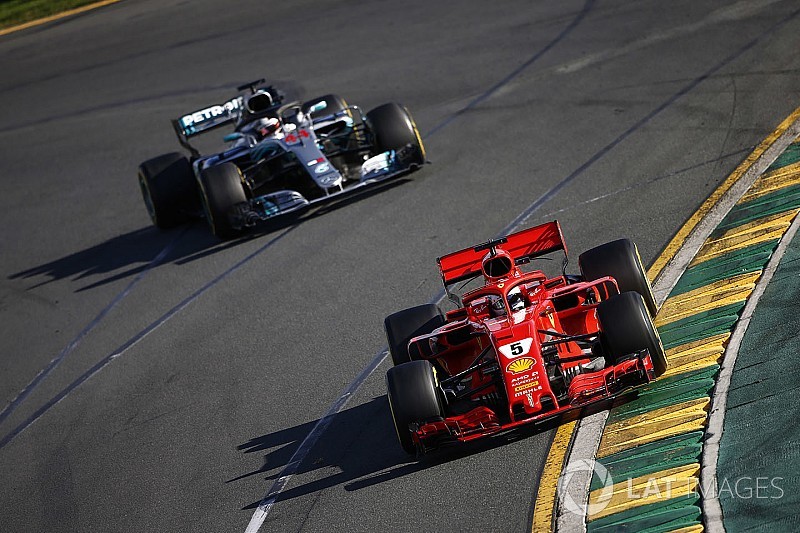 Lewis Hamilton says he is already driving with Formula 1’s new engine limit in mind after backing off in the Australian Grand Prix to protect his Mercedes power unit.

Hamilton said he wanted to push to the end but did not because he was nervous as teams must now complete the season with just three engines, instead of four.

“The engine was overheating, and I’ve got to do seven races with this engine, preferably more if I can,” he explained. “I was on the limiter, and I was too hot, but I was pushing.

“So, I was nervous of damaging the engine at the same time.

“I just thought [near the end] I couldn’t get him in those other laps, my tyres are going to be worse than now, I’m driving right now at 110 percent, I’m risking everything just for that seven points.

"I should probably sit back, save my engine, and use the life of it for the next ones. That goes against my spirit of racing, because I want to race right down to the last line.

“[I am] fit enough, I felt good, but the way this sport is set up with fuel saving and all these different things, three engines, you have to think about that and back off.

“So, it’s probably not exciting for the fans to have seen, because they probably wanted to have seen it to the end.

“But I want to finish my season on those three engines, I don’t want to have to have a fourth.”

Hamilton explained that his mid-race radio communication, in which he said he needed to know how much his team wanted to win, was born over frustration of not knowing if he was allowed to push.

“Communication is something we’re going to obviously try and work on,” he said.

“I was like, ‘Can I fight, can I go?’ And they were taking their time.  So, I was like, I’m going for it, and I gave it everything in that moment.”

As Hamilton bid to repass Vettel, who had got ahead thanks to a fortunately-timed virtual safety car, the reigning world champion made a mistake and went off-track slightly at Turn 9.

“I was quite close behind him in his tow, just locked the right front, didn’t make the corner,” said Hamilton. “After that I was catching again, but in trying to catch up, temperatures were again on the limit, so [I was] constantly being pushed and pulled.

“I was able to manoeuvre the car and get relatively close. It was like [two of the same poles of] a magnet, you can’t get the magnet past a certain region. That’s how it was.

“I was able to follow a lot closer than I remember in the past, but I couldn’t get any closer than that.”

Liberty to present F1 future blueprint to teams in Bahrain

Why F1 teams should be wary of attacking Haas