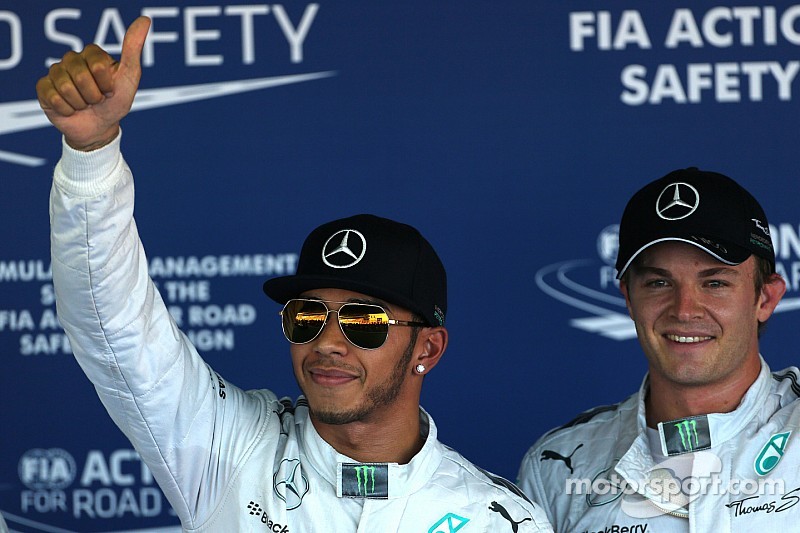 Mercedes scored a fifth consecutive front-row lockout - and its ninth in all in 2014.

Lewis Hamilton's 38th career pole position marks the team's 15th pole from 16 races during the 2014 season. Both drivers completed just three runs in qualifying, using one set of option tyres in each part of the session.

This marks the fifth time in 2014 that Mercedes-powered cars have secured the top four qualifying positions.

Lewis Hamilton: "It's an amazing feeling to come to this beautiful place and to race on this track. It's fun to drive. Today, the laps in practice felt more special. In qualifying it seemed a bit harder to get that special lap but I'm grateful that I was able to improve. I crossed the line and I was just hoping I got it; when they tell you, it's the biggest relief - a great feeling.

The corners are mostly medium and high speed where you need a lot of downforce, so tomorrow should be a challenge. It's a long run down to Turn One and we need to be mindful there are opportunities to overtake here. It was great to see such a strong turnout for the first Saturday of running at this new track. Hopefully we can give them a good show tomorrow."

Nico Rosberg: "That was a very difficult qualifying today; we had to adapt a lot of things. The track is new and so unique: the tyres last very long as the surface is very smooth. Lewis was just quicker today so I need to have a good start tomorrow. Starting from the front-row is still a good position to begin the race. I guess this will be an exciting Grand Prix; there will be some opportunities to overtake on the straights and I am sure we will see plenty of action on track."

Toto Wolff: "It was another big battle between our drivers with Lewis coming out just on top in the end. It was hard fought on every run, with Nico starting out stronger, then Lewis each time able to find a little bit extra on the second and third timed laps. The performance was ramping up as the runs went on and it looked like Valtteri (Bottas) in the Williams was going to spoil our party at the end - he had two purple sectors then made a mistake in the final corners and didn't improve.

But we have every reason to be happy with a Silver Arrows front row at the end of an unusual qualifying session. We expect the competition from Williams and McLaren to be tough tomorrow, like it should be in Formula 1, so we will need to be on the top of our game in terms of performance and strategy. A special word, too, for Daniil Kvyat: he did a great job to qualify fifth at his home race."

Paddy Lowe: "That was a very tense qualifying session and we went into it knowing that Williams and McLaren would be tough to beat today. Like the other teams, we found ourselves in an unusual situation with tyre usage owing to the new track surface. New tarmac such as this has a layer of tar on top of it, which gets worn down with time but initially makes it very hard to work the tyre enough to get temperature into it.

This is the phenomenon we have encountered this weekend and also saw in Austria earlier this year. As a result, the tyre performance was improving lap by lap - and this meant we ended up electing to make a five timed lap run in Q3 to get the best out of them. Although the shape of the session was atypical, the drivers did their customary excellent job.

Lewis took a deserved pole, topping the times in every part of qualifying, while Nico secured a strong second place under some pressure from Bottas in the Williams. Looking ahead to the race, the tyre behaviour means that a one-stop strategy is feasible - although not necessarily the optimal solution."