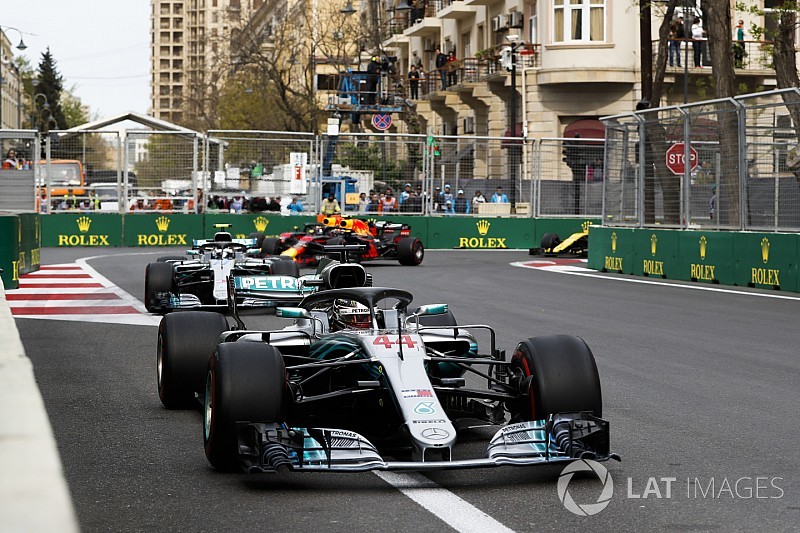 Lewis Hamilton admitted that his victory in the Azerbaijan Grand Prix felt a ‘bit odd’ after rivals Sebastian Vettel and Valtteri Bottas hit trouble at the end.

Hamilton didn’t appear to have the pace to challenge for the win in the early stages of the race, and was running third behind Bottas and Vettel at a late safety car restart.

But the race came to Hamilton as first Vettel outbraked himself at the first corner and ran wide, before Bottas retired from the lead a lap later when he suffered a puncture after running over debris.

Speaking after the race, Hamilton said: “It was really quite an emotional race to be honest.

“Valtteri did such an exceptional job and really deserved to have the win, also Sebastian did a great job.

“It feels a little bit odd to be up here, but I’ve got to take it. I didn’t give up, I kept pushing but an untidy race for me.”

Mercedes non-executive chairman Niki Lauda said that his team had mixed feelings about the result – and was angry that the debris that cost Bottas the win had not been cleared.

“It was good and bad,” he told Sky Sports. “Why didn’t they clean up the circuit properly? There was so much time to do it. It was a disaster for Bottas and for Lewis really good.”

He added: “He [Bottas] did everything absolutely perfect. He could have won the race easy, but nevertheless Lewis did a good job too so thank god we won the race.”

Alonso: Other drivers would have "parked" with my damage