Haas frustrated to be "playing games with a thermometer"

Formula 1 team boss Gene Haas has admitted his frustration at the significant role played by tyre management in 2019, saying his team is having to "play games with a thermometer".

The team has struggled all season to stay in the optimum tyre operating window in races, having often showed promise in qualifying.

But warmer conditions and the nature of the Barcelona track contributed to an improved performance in Spain, where Kevin Magnussen finished seventh and best of the rest, and Romain Grosjean was 10th.

“It was warmer today, and we didn’t have that problem, but even with Grosjean on the restart, his tyres were a little bit cooler, but a couple of laps later he was back up to speed. It’s very critical to keep on top of the tyres.

“It seems like it’s just luck if you get the tyre in that right temperature zone. It would be nice if Pirelli could make it so it wasn’t so sensitive to that. We’re playing games with a thermometer, not racing cars.”

Haas added that the team has to find some straightline performance: “That midfield is so tight. We were obviously slower on the straights than a lot of our competitors, but we were able to keep ahead of them in the turns. We’ve got high speed drag but the downforce makes us better in the turns.”

Haas team principal Guenther Steiner had expected Barcelona to be more favourable for the black and gold cars, and cautioned that there was still work to do to address the tyre problem on a long term basis.

“I mean coming here we knew from testing that we can get the tyre to work here,” he said when asked by Motorsport.com. “It is obviously a sign of progress from Baku, because Baku was pretty dull for us, you know, because before we always had the cars in the top 10 in qualifying.

“We know the speed of the car, we just can’t on certain tracks get the tyres to work, and here it’s working, we're on the limit here, we get it in.

“But what we need to do is we need to find a way to make them work everywhere, because it’s clear that the car is good. There’s no doubt about it, the speed of the car.” 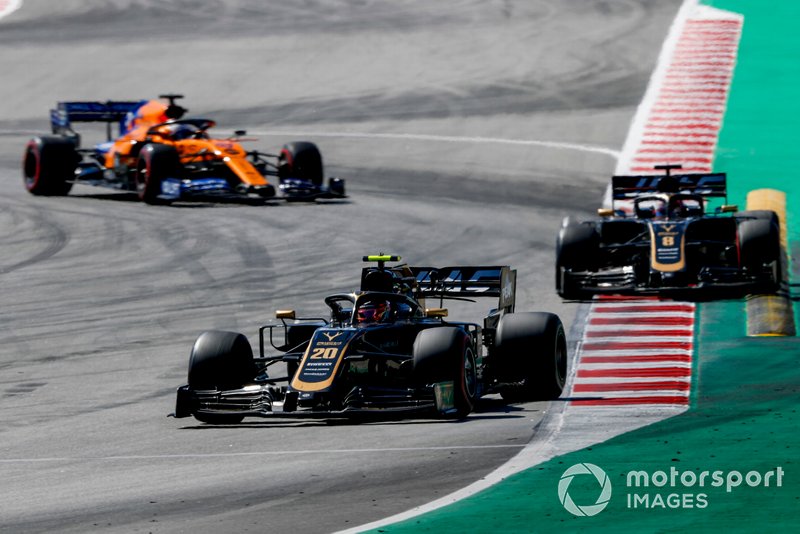