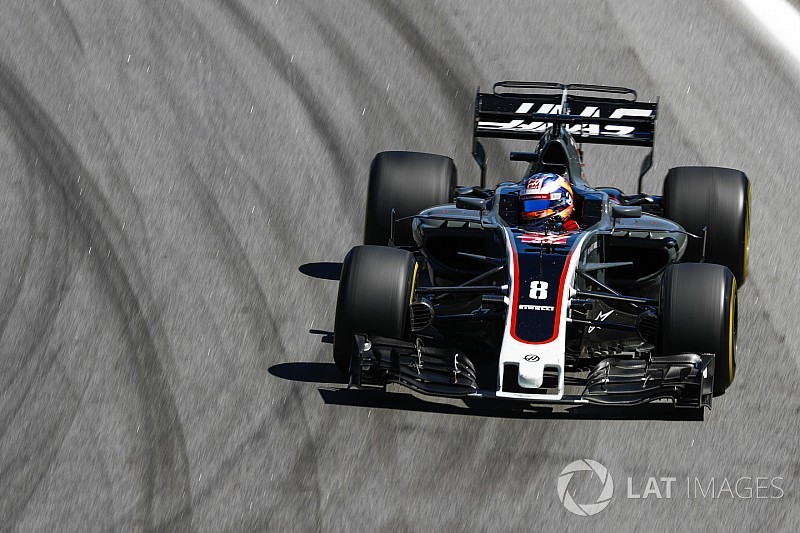 Haas team principal Gunther Steiner has criticised Formula 1's stewards for a lack of consistency after Romain Grosjean was penalised in the Brazilian Grand Prix.

Grosjean lost control of his Haas at Turn 5 on the opening lap of the grand prix and hit Esteban Ocon, sending the Force India into the barrier and into his first F1 retirement.

The stewards deemed Grosjean to be at fault and handed him a 10-second time penalty and two points on his licence.

Grosjean, who finished 15th, apologised for causing the accident but said after the race he is "struggling to understand" why he was handed a penalty.

Steiner questioned the severity of the penalty, given Lance Stroll only got one point and a three-place grid penalty after blocking Grosjean in Mexican GP qualifying.

"I share my surprise more in the verdict," said Steiner. "It doesn't influence our result here. We were done by then. We took it as a test session, nothing else.

"He got two penalty points for a race accident in my opinion. Then you see Stroll got one penalty point when the speed difference was 140km/h and that was pretty dangerous.

"I'm struggling with consistency here. I continue to struggle. It doesn't get any better. The more I mention it, I think it gets worse."

Steiner spoke to F1 race director Charlie Whiting immediately after the race in Mexico to try to understand why Grosjean was penalised for cutting a corner and Fernando Alonso was not punished when they later made contact.

At the time Steiner said they had "constructive discussions" but when asked if there has been any progress on the issue since the talks, the Haas team boss said: "Not as far as I know.

Kevin Magnussen escaped sanction from the stewards after being summoned to explain his role in the incident at the start the Brazilian Grand Prix.

Speaking before the decision, Steiner said: "It was a racing incident. Turn 1, what should he do? Let everyone by again?

"It's very similar to Sebastian Vettel - Max Verstappen incident in Singapore when Vettel didn't see [Kimi] Raikkonen was on the left [and they collided but no driver received a penalty]. It happened. For me it's as simple as this."

"Astonishing" Hamilton could have won in Brazil - Wolff

Analysis: How Hamilton went from last to fourth in Brazil