Haas removed parts of the bargeboard package of its Formula 1 car for Monaco Grand Prix qualifying because they were too fragile.

Romain Grosjean lost several pieces of carbon fibre running over the kerbs at the Swimming Pool during practice on Thursday, resulting in the team running without the bargeboard footplate situated low at the front of the floor from free practice three onwards.

Haas endured its worst qualifying performance of the year, with Romain Grosjean 15th fastest and 1.918s off pole position and Kevin Magnussen 19th and slowest of those to run.

"It's a problem we have been trying to fix now for six races, and we achieved it in some places but we didn't achieve it here," said team principal Gunther Steiner when asked about the problem by Motorsport.com

"We had to stop and take some measures to take them off proactively instead of waiting for when they fell off.

Magnussen suggested that the change in aero specification meant Haas was running in a specification that was "quite low on downforce compared to what we had in the first race".

Teammate Grosjean confirmed it was having an impact, and that the parts couldn't be sure to last over the bumps and kerbs at Monaco.

"We're missing quite a few parts on the floor and that cost us quite a lot of downforce," said Grosjean.

"The bargeboards are quite complicated, they direct the airflow underneath the floor and we have to remove them because they fall apart.

"There's a lot of contact with the kerbs here and they just wouldn't last long enough."

Steiner could not confirm whether or not the overall downforce generated was lower than the car at the start of the season because the team has never tested this aerodynamic configuration in the windtunnel or CFD.

"It's there or thereabouts," said Steiner when asked if the downforce level was lower than at the start of the season.

"Because you don't run a car with this geometry, you don't get the map so you don't know what it does around the corner.

"We would make this thing and put it in a windtunnel to try to find out what it does in yaw, but we lost downforce.

"You guide the air where you want it, and if you take these parts off you don't know where it goes and you're not going to investigate where it goes because you're never planning to run it like this."

Steiner confirmed that the components in the upgrade package that is set to be introduced for the Canadian Grand Prix will be stronger following work both by the team and Dallara to fix the problem.

He admitted this will mean the components will be heavier, as more layers of carbon fibre will be used.

"Absolutely," he said when asked if the parts would be made heavier. "We have had this issue since Barcelona testing and we are aware of it.

"Everyone's aware this cannot happen anymore and it was designed and manufacturered to a different spec. The easiest way [to increase strength] is to have more weight." 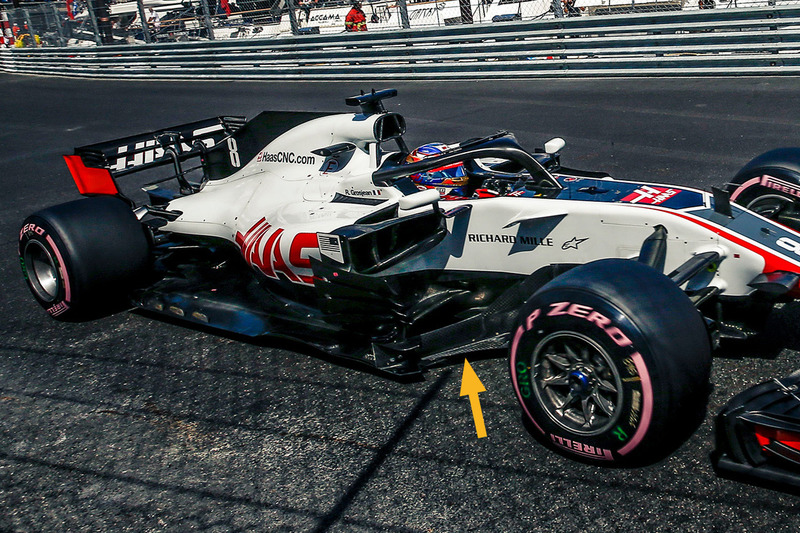