Mick Schumacher triggered a red flag when he spun off at the high-speed Turn 22 early in the race.

Following the restart, an unsighted Nikita Mazepin ran into the back of George Russell as the Williams driver tried to avoid Sergio Perez, who had been spun round by contact with Charles Leclerc.

Mazepin's chassis was damaged beyond immediate repair, so the spare will be pressed into action for next weekend's Abu Dhabi GP. The Russian already had a chassis change at the Qatar GP after damage was sustained running over a kerb.

Steiner says the team has enough parts with which to start the final weekend of the season, but cannot afford another major accident.

"It's better the damage is done now than five races ago," he told Motorsport.com. "We have got one race to go, we've got enough spares to rebuild the cars, but we don't have enough spares if we have accidents in Abu Dhabi.

"We still have got some, we're not completely out. But there is not a lot of margin, because we didn't expect at the second last race to destroy two cars. It's never good to do this."

Asked to quantify the extent of the damage, he said: "Mick was three corners completely, gearbox, floor, sidepod. His chassis is good, but Nikita's chassis is gone. Another one bites the dust.

"It was the damage from the wheels coming back, the wheels smashed the sides like a drum. Also the complete front suspension. His rear car is not too bad, but the front is completely destroyed on his car.

"As I said, we are good with spare parts, we knew we are good, we planned, we are not running out, but we are using everything up that we have got. If we have a crash in Abu Dhabi in FP1 it's getting tight, because you have two days to go. But otherwise we are fine.

"It's like it doesn't rain, but it pours, so at the moment, it's pouring. The good thing is we've got only one race to go, otherwise, if you've got three races to go, you need to produce parts.

"You cannot now, because you haven't got the time anyway – in three days, you don't make these parts. We have enough and we can just get to the end. And we'll have no inventory to write off left at the end of the year!" 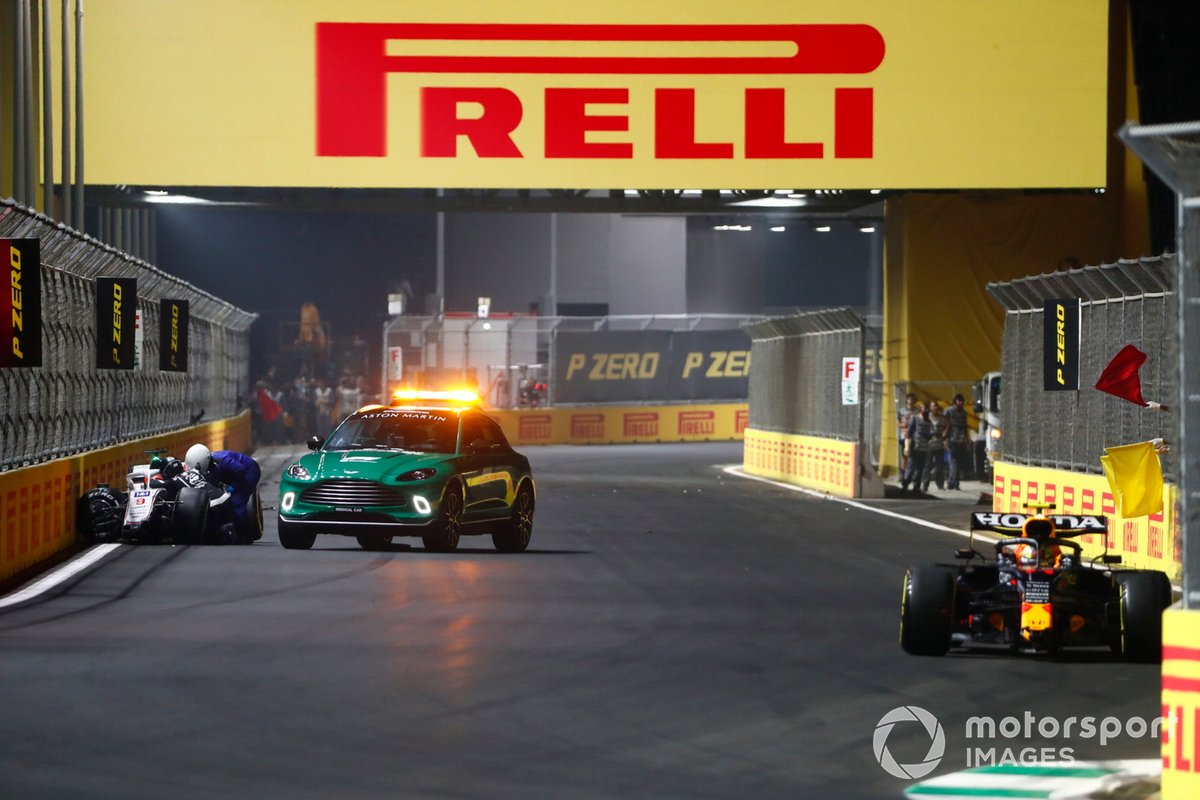 "I'm fine," said the Russian. "I took quite a big hit, especially on the left side of my upper body, and for sure will wake up sore tomorrow.

"But yeah, I'd say I'm very fortunate to be racing in this era because the work that Jean Todt has done together with the FIA made us be able to walk out of this today. And I'm not sure if it was same, let's say, 15 years ago.

"From what I saw, Charles didn't have anywhere to go, spun Sergio around. The place is so tight that when Sergio was sideways it took about 85% of the circuit. So George seeing what's happening took a precaution and then lifted or braked.

"And I was fighting with [Lance] Stroll and we were both going to go flat through that place. But unfortunately, there wasn't enough time to stop, because the speeds were over 200, and just was impossible to avoid George's back."

Magnussen: 2022 was good year for Haas to restart in F1