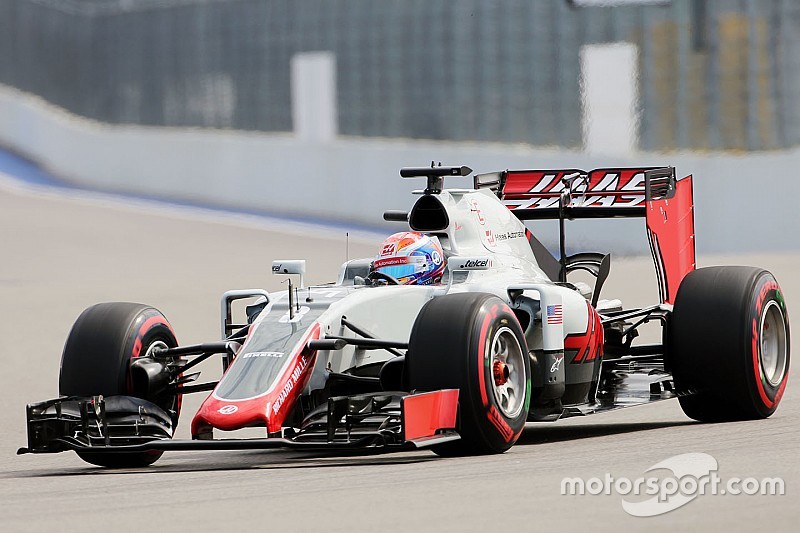 Preparations for Sunday’s Russian Grand Prix began under a partly sunny sky, with the opening practice session at Sochi Autodrom affording Haas F1 Team valuable mileage. The 90-minute session Friday morning at the 5.848-kilometer (3.634-mile), 18-turn track highlighted the circuit’s lack of grip, with a multitude of cars experiencing brief, off-track excursions at the beginning of the session.

The early pace was set by Mercedes, with championship point-leader Nico Rosberg setting the fastest lap (1:38.127) after a mid-session switch to the Pirelli P Zero Red supersoft tire. Also on the Red supersofts were Haas F1 Team drivers Esteban Gutiérrez and Romain Grosjean, which the duo ran throughout the session.

Gutiérrez’s initial track time was delayed due to a minor technical issue, the result of which required a quick battery recharge on his VF-16. Once cleared to run, Gutiérrez set to work on a 16-lap run. His best tour, a 1:41.238, was the 16th quickest time. Grosjean was just behind his teammate with a best lap of 1:41.385, secured during a seven-lap run early in the session that placed him 17th. A variety of setup changes followed, as Grosjean pushed to improve the performance of his VF-16. His final run saw a front-wing change for further data evaluation.

Lap times dropped in the second 90-minute practice held in the afternoon. Gutiérrez hit the track as soon as it opened, shod on the Pirelli P Zero Yellow soft tire. Grosjean followed suit with the same tire choice, with both drivers switching back to the Red supersofts for their second timed stints. This allowed each driver to set their best laps of the day. Grosjean’s fast time (1:40.260) placed him 16th and Gutiérrez’s quickest tour (1:40.508) slotted him 17th. Longer runs followed, on used tires and with higher fuel loads, to prepare for Sunday’s 53-lap race.

Between the two sessions, Haas F1 Team ran a total of 88 laps split equally among its two pilots – 44 by Grosjean and 44 by Gutiérrez.

As in the first session, Mercedes was atop the board in the second practice, albeit with a different driver. Two-time Russian Grand Prix winner and defending FIA Formula One World Champion Lewis Hamilton was the fastest of the 22 drivers, with his lap of 1:37.538 set on Red supersofts.

“It was good to be back in the car. Sochi’s a track I quite like. We didn’t have a very easy day trying to assess how to work our tires and how to work the car. We can improve and make the car better. Hopefully, we can find those answers for tomorrow, as our performance is not exactly where we want it to be right now. Again, it’s all about working and learning everything. We’re struggling a little bit today, but I’m sure the guys are going to react well.”

“I’m pretty happy how the day went overall, as we managed to complete a lot of laps. We’re not as competitive as I would have hoped, but we gathered a lot of data today. We’ll be looking over that to try and optimize our setup as much as we can. In FP1 we had a small interruption this morning, and then this afternoon we looked to be heading in the right direction. We’re still working on our setup with the supersoft tires, so I think FP3 will be important for us to get a good reference for qualifying.”

“FP1 we had a small issue with Esteban’s car, which took us about 50 minutes to fix. Then we had to recharge his batteries, but it was no big issue. Between the two practice sessions we had good runs. We did quite a lot of laps – more than we’ve done before in two free practice sessions. We are still chasing our setup for here. We need to get the tires in the window where they work properly. Otherwise, we got a lot of running in and we’ll see what we can come out with for tomorrow morning in FP3.”