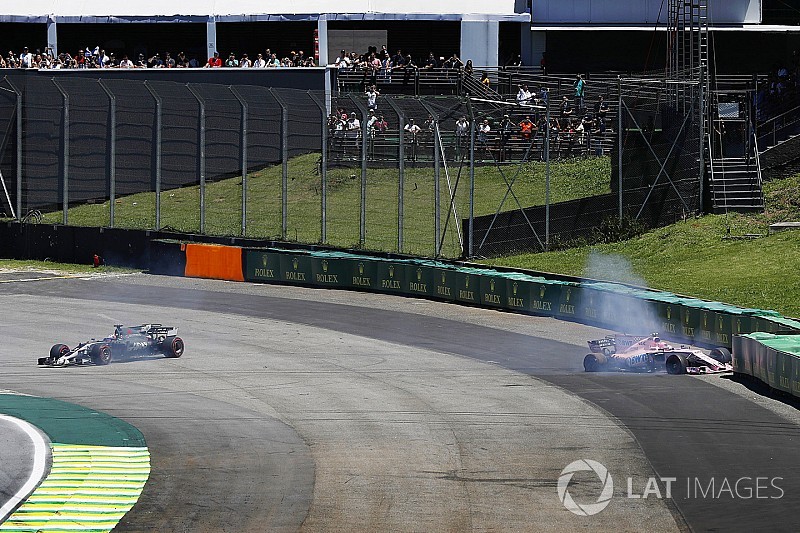 Romain Grosjean says he is "struggling to understand" why he was handed a penalty for his clash with Esteban Ocon at the start of the Brazilian Grand Prix.

Grosjean lost control of his Haas car at Turn 5 on the opening lap of the race, hitting the Force India, which was sent into the barriers and out of the race.

It was Ocon's first retirement in Formula 1.

Stewards deemed that Grosjean had been at fault and imposed a 10-second time penalty.

Although Grosjean apologised to Ocon for the accident, the Frenchman was baffled as to why he was penalised, as he believed it was a simple racing incident.

The Haas driver also reckoned he spun because he had a puncture.

Speaking in a video message shared after the race, Grosjean said: "Not the race we were hoping for. I'm sorry for the contact with Esteban.

"I was touched strongly from behind, I believe I had a puncture from there so when I got to Turn 6, I lost the car and he was on the outside.

"It's to me a racing incident, in my opinion, I'm really struggling to understand the penalty. It is what it is and we have to move on."

Ocon, however, had a different view of the incident and reckons Grosjean should not have pushed so hard.

"I was ahead the braking point, and he just lost it in the rear and crashed into me," Ocon said.

"[The penalty] is a small recognition. I blame him, it was his fault, for sure.

Although Grosjean was able to continue after pitting, he went on to finish in 15th position, two laps down.

The Frenchman believes he had the pace to finish in the top 10.

"I think it was a race where we could have aimed for points, the car felt pretty good, especially with all the damage we had," he said.

"The last stint, the car on supersofts really was how I like it, so we're going to work on that and try and take some positives to Abu Dhabi."