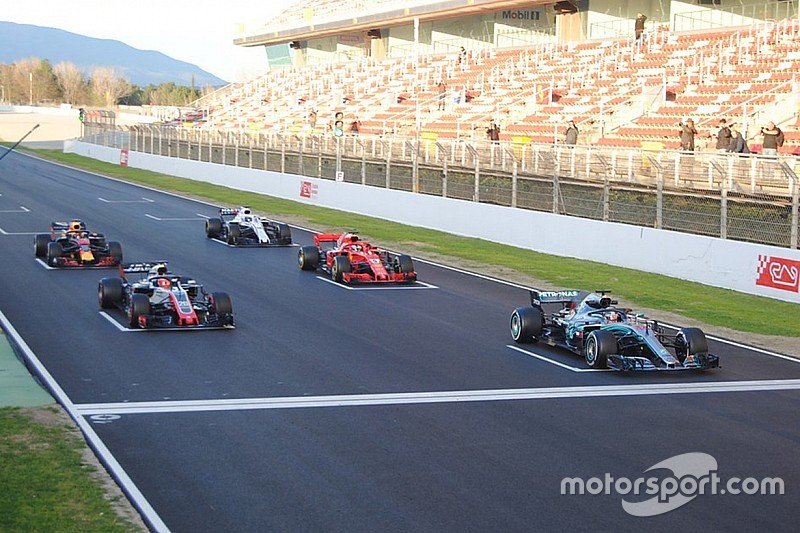 Romain Grosjean believes some Formula 1 restarts could descend into "carnage" if drivers have to stick with old tyres after a red flag.

F1 races this year may feature standing starts after red-flag periods, with the cars being led by a safety car before forming up on the grid.

Though drivers will have the option to fit new tyres in the pitlane while preparing for the restart, they may not have fresh rubber left in their allocation.

That would leave some contending with poor grip, which Grosjean suffered from while performing a practice run of the restart procedure on old rubber in testing on Wednesday in Barcelona.

He said it was so bad "I didn't go above fourth gear", claiming he would usually reach eighth by Turn 1, and claimed that "safety-wise I'm a bit concerned".

"To me it could be carnage," he said. "You could lose the car in a straight line. Honestly, I was not having much fun, just trying to upshift and downshift was tricky.

"[Valtteri] Bottas was in front of me and was not having much fun either."

Grosjean said if someone is able to take on fresh tyres and another driver is not then "you're going to lose 25 seconds on the first lap".

"It's undriveable," he added. "I was one of the first cars to come on the grid, so I stay there with Bottas a long time.

Grosjean likened it to when drivers have crashed out of safety car restarts in the rain.

He said: "Some tracks it's fine, you can generate the temperature [in the tyres].

"Canada [is good but] here in those conditions [or] in China, I'm not sure you're going to get that temperature back."

Grosjean also revealed he thought the FIA was just experimenting with the procedure and did not know standing restarts were definitely being implemented.

"I'm just going to say that in my experience I feel like it's dangerous," said Grosjean.

"Maybe the others don't feel the same but I don't feel confident going with cold tyres."

Grosjean's team boss Gunther Steiner said the restarts would "make it more interesting" but said rule makers needed to be wary of consequences "that we don't expect".

"It needs to go up the chain now and we'll see what the outcome is," he said. "That's why we do these tests.

"I don't know how bad it is and for sure somebody will be looking into it, getting videos and times, and they'll see if it's actually dangerous or not."