Jul.22 (GMM) Romain Grosjean's father has cleared up a paddock mystery about why the Swiss-born Lotus driver wears a French flag on his overalls waist-band. 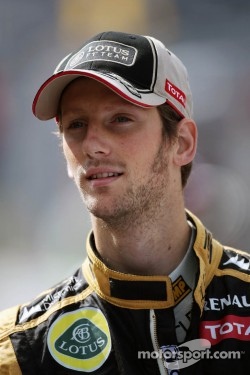 Grosjean, born and raised in Geneva, now races with a French license and calls himself a Frenchman, and if he wins a Grand Prix, the podium loudspeakers will play La Marseillaise.

But why he fails to honour his birth nation is not widely known.

Grosjean's Swiss father Christian told Blick newspaper: "Switzerland never helped my son throughout his career, while the French did.

"My heart beats for Switzerland, but you have to be loyal and stay loyal to the country that gave you a chance," Grosjean's father, a lawyer and former junior slalom skier in Switzerland, insisted.

He explained: "In 2003 Romain was the champion of Formel Lista. But the Swiss team owner Andreas Jenzer saw no talent in Romain, even though a few years later he at least apologised.

"Then Renault helped us," he said.

Indeed, in 2006 Grosjean moved into Euro F3 with the French team Signature before winning the championship in 2007 with another French outfit, ASM.

He entered GP2 with Frenchman Nicolas Todt's ART team, made his F1 debut in 2009 with Renault, and returned to GP2 in 2010 to win the title with French squad DAMS, headed formerly by Frenchman and current Lotus chief Eric Boullier.