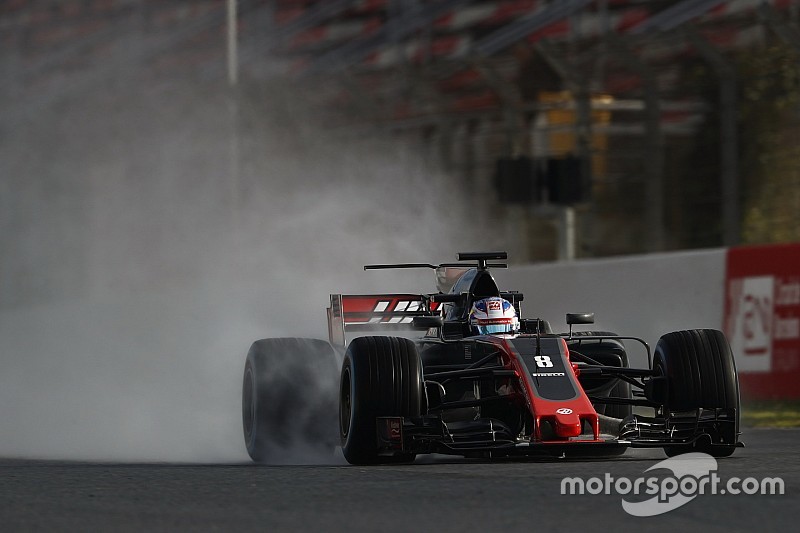 Romain Grosjean says Pirelli has made big progress with its full wet tyre after early running at Barcelona, but say the new intermediate gets ‘destroyed’ too quickly.

Pirelli has devoted the final day of this week’s first pre-season test to rain work, having artificially soaked the track at several times to simulate bad weather conditions.

And although it has been hard to keep the water on the track at consistent levels, Grosjean says his early impressions of the new tyres are pretty positive.

“It is quite interesting the wet,” he said. “There is a lot of progress made from last year. We haven’t had too much overheating with the rear and the temperature is staying in. The warm up was okay-ish.

"The intermediates are really good for one lap and then they get destroyed a bit too early – so some work is to be done. But generally it’s a good step from where we ended up last year.”

Renault’s Nico Hulkenberg said that artificially soaking the track was not perfect, because the surface was drying too quickly in the sunshine.

Furthermore, he said teams were reluctant to run too much because they are light on spare parts in case of an incident.

“It wasn’t the most efficient I think – but we tried at least,” he said.

“We didn’t do that much running because they had to wet the track and it really dried pretty quickly, so was straight into inter conditions.

“I went out one run on full wets and one run on inters to see how the car reacts and it went quite okay and I was happy with that.

“We couldn’t test very deeply regarding aquaplaning, so I think we will find out during a race weekend.”