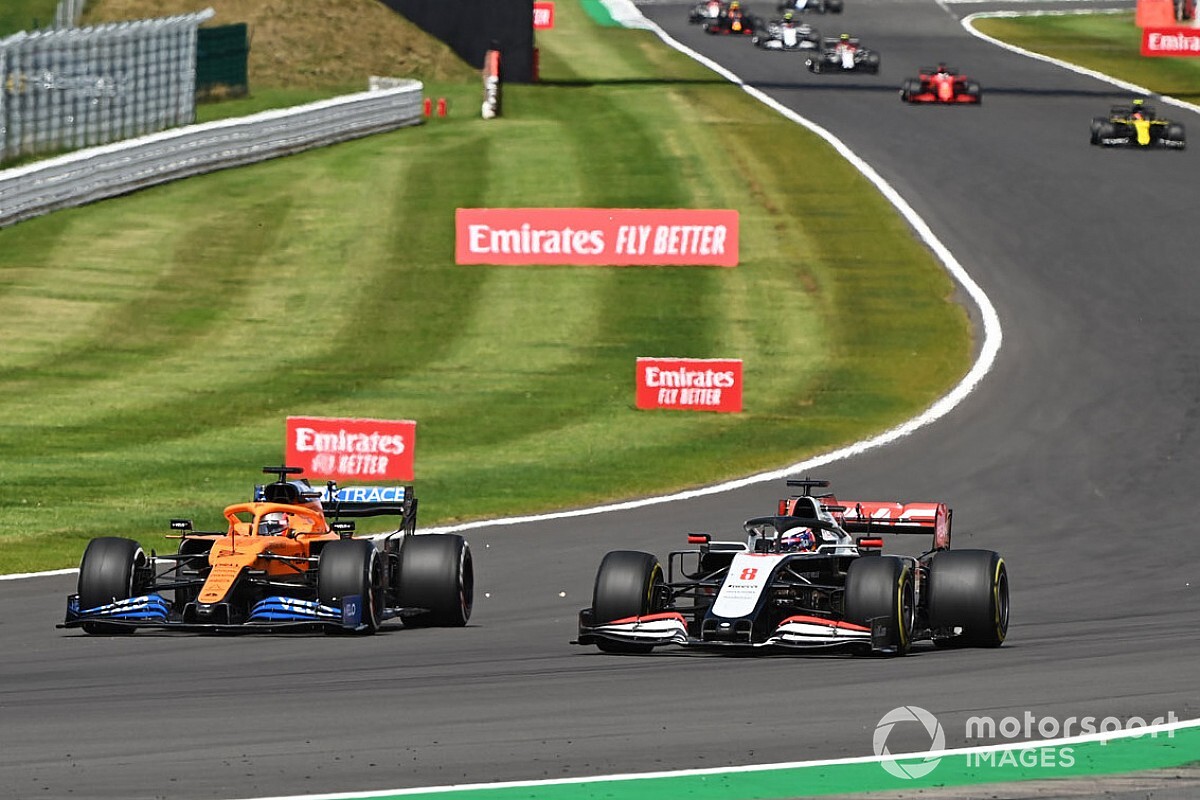 McLaren Formula 1 team driver Carlos Sainz has called Romain Grosjean's defensive move in the British GP "unacceptable" because the Frenchman reacted to the movement of the car behind.

The Haas driver was shown a black and white flag and then received a post-race warning from the stewards after the race following two controversial moves, the first in front of Sainz, and the second Daniel Ricciardo.

Grosjean himself still disputes that he did anything wrong with Sainz, but after reviewing videos he acknowledged that his move on Ricciardo was "marginal" and "too late".

"Personally I think it was unacceptable," said Sainz of the move Grosjean made in front of him.

"From the driver's point of view, when you are behind someone, it doesn't matter if you leave a gap on the right hand side as he claimed he was leaving, I think you cannot react to a movement of the driver behind you.

"I think you need to commit to your defence, to your line, and not react to the driver that is coming behind. He was clearly waiting for me to make a move to cut me off the track, I think that is unacceptable.

"If I have a chat I will tell him, I think he will agree if he would have been in my position, although he probably will not admit it in the media. But we all know, with the speeds that we're doing in F1 nowadays and he probably knows that what he did is not correct."

After the race, Ricciardo called Grosjean's driving sketchy, but asked to elaborate on Thursday he played down the incident, and acknowledged that Grosjean had realised he moved too late.

"He's been doing it long enough, and I think when he saw the replay from our onboard, he understood that it was quite close, and a bit late. I think it's just about really, for us drivers, I think in defence, you make your move, you commit.

"I think responding to the car behind is always a bit on the edge, for the closing speeds and in the slipstream. The closing speeds, it's sometimes too much to react once they have."

Grosjean insisted that while he was too late with the Ricciardo move, he had left Sainz space.

"I was defending as hard as I could," he said. "It's my job, trying to stay within the limit. I had a chance to see the footage, and I do agree on Daniel, I moved too late.

"I was always going to give the room for one car, but obviously he doesn't know that when I'm moving. I moved too late and reacted to the right, and it was a bit too late.

Asked if a lack of straightline speed was making life harder for the Haas drivers in races, he agreed that it meant they had to defend.

"Definitely top speed is not our strength." said Grosjean. "We know that when there is a car behind, the straight line is not our favourite moment, and we need to defend and be a bit creative. I guess we just need to try to do the best we cannot defend the position.

"I knew it was a key moment in the race, that if I could open a gap with the positions behind, maybe we had a chance with a late pit stop in coming back through the field to get points. I played my own card as best I could. I've got no regret over the race.

"As I said on Daniel, it was a bit marginal. It's not an excuse, but our mirrors are not the best in the world. I got caught a little bit by that. If not, I think the other one was fine. I actually enjoyed the use of black and white flags.

"I think it's a good regulation that was brought this year, and gives us an idea of what is right and what is wrong."