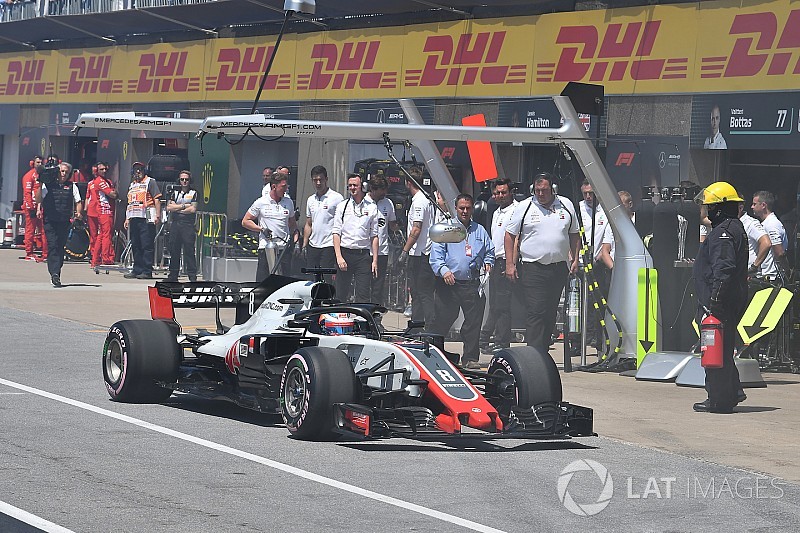 Romain Grosjean will take part in French Grand Prix practice with the Ferrari Formula 1 engine that caused his smoky exit from qualifying in Canada.

Grosjean had new Ferrari engine components fitted for the race in Montreal, which activated the final free MGU-H and turbocharger in his seasonal allocation.

Haas feared that the spectacular problem had caused significant damage and would therefore cost it an available engine, and the components attached to it, from its pool.

The team was informed by Ferrari last week that the engine suffered no internal damage in the qualifying incident.

This means the V6, MGU-H and turbo remain in use and will be used in practice at Paul Ricard on Friday.

"It [the Montreal qualifying engine] will be in the car again tomorrow," Steiner said. "No damage, which is good. It is the last thing we needed.

"It went back to Ferrari and they inspected it, they said there was no internal damage. We just got that news on Friday last week.

"We had to bring a new engine into the pool [in Canada, but] at the moment we don't foresee a grid penalty for the engine or one of the components."

Keeping the second engine in the pool gives Grosjean and the team more flexibility with how to use his allocation over the rest of the season.

Grosjean's engine problem in Canada was the latest setback in a difficult 2018 for the Frenchman, while earlier in the weekend in practice he struck a groundhog.

His exit from qualifying condemned him to a back of the grid start and meant his point-less start to the season continued.

Ahead of Grosjean's home race, Steiner said: "His competitiveness in Canada was good so he's in good spirits.

"If you hit a groundhog, what can you do? You can get upset but it doesn't do anything. The engine wasn't down to him.

"He got his confidence back after what happened in Barcelona and Baku. He was very happy with the car, he was very comfortable with it, just the result wasn't there.

"He's looking forward to going out on track again tomorrow."