Formula 1 race director Michael Masi says the scale of the barrier damage in Romain Grosjean's Bahrain GP crash was the result of the huge energy involved in the incident. 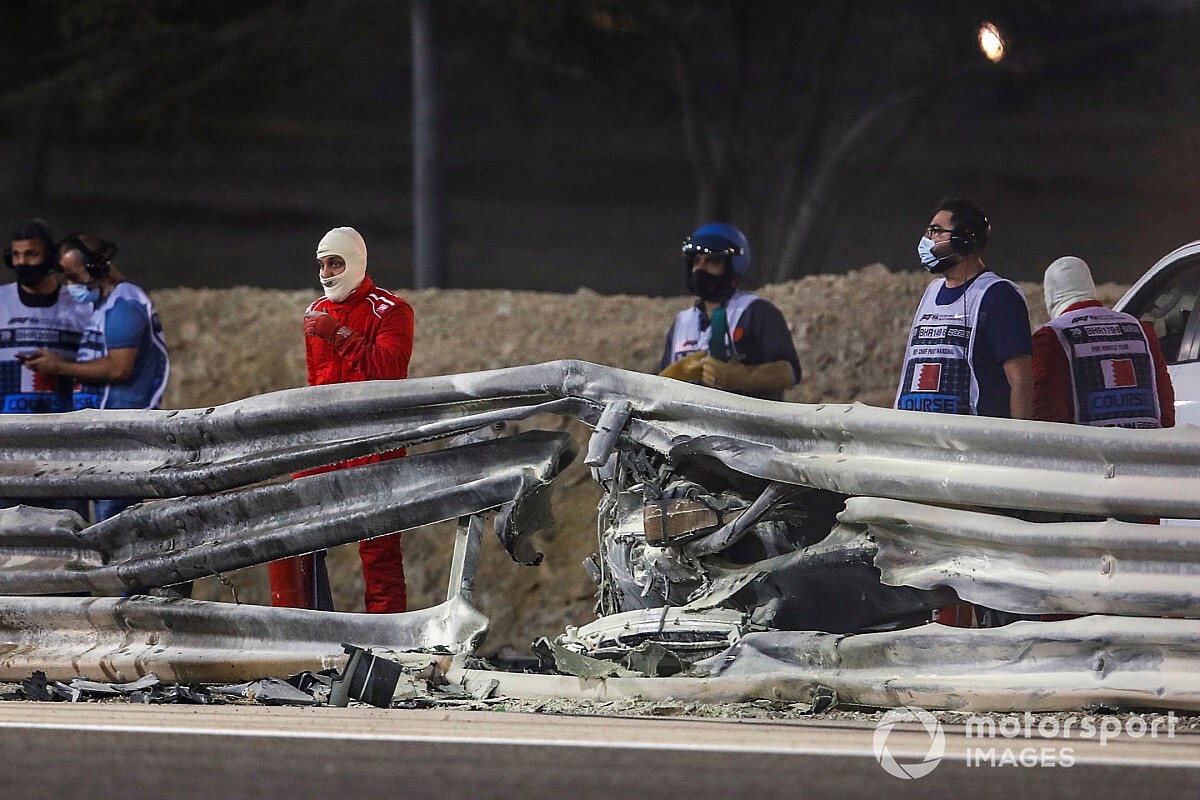 After first lap contact with Daniil Kvyat, Haas driver Grosjean struck the barrier at 221km/h at a sharp angle, prising the layers apart and allowing the chassis to pass through while splitting the whole rear of the car off.

Masi, who oversaw the metal barrier's replacement with concrete blocks for the race restart, agreed that lessons would be learned.

"The amount of energy that was just seen, having gone out there and looked at it all, there is only so much you can do," he told Sky F1.

"But as the FIA we will look at it all, undertake a full investigation of the whole incident and what we can learn.

"Be it car safety, be it driver equipment, be it safety features around a circuit, and what we can actually learn."

Asked if the accident was a 'freak', he said: "I think it is. So much energy suddenly has to go somewhere.

"So you look at the car - the survival cell did exactly what it is there to do, it kept the driver safe and intact. The halo did what it did, just from an initial observation.

"We will review the incident itself, and see if there is anything we can learn in the short term. But certainly from the barrier integrity and so forth, there is no knee-jerking to it.

"The Bahrain circuit and the way they got into it and undertook everything in a professional manner, it was a case of having a look at what we have, what was the best circumstance that we could do.

"But I have been involved in enough barrier repairs in my life in previous worlds, but you learn about what you can and can't do in the situation."

Masi explained that the main reason that the damaged barrier was replaced with concrete blocks before the restart was that it would have taken too long to guarantee the integrity of the new posts, given the scale of the impact and the disturbance to the ground in that area.

"Obviously, the initial part was primarily getting the incident under control," he said. "Once that was done, effectively going into the repair phase.

"I went out on site to inspect first hand, what it was, and then spoke to the circuit engineers about what they had available, and what we could do.

"You have to consider each circuit, each level of terrain and so forth on its own merits. So obviously, here by nature, it's quite sandy ground and so forth. So structural integrity. And, like a lot of places they had concrete barriers that were available.

"So the first part was, effectively, okay, this would be the best, the most efficient, but obviously the best repair that could happen at that area. And the safest, most importantly."

Masi praised everyone involved in dealing with the incident.

"The guys here at the Bahrain International Circuit did an amazing job.

"And credit where credit is due from all facets with that incident response, be it marshals, fire marshals, our amazing medical car team and Alan van der Merwe and Dr Ian Roberts, the management from a race control perspective.

"It's not just one little piece, it's everyone working together. So credit to everyone involved."

Red Bull "could have done better" to beat Hamilton on strategy