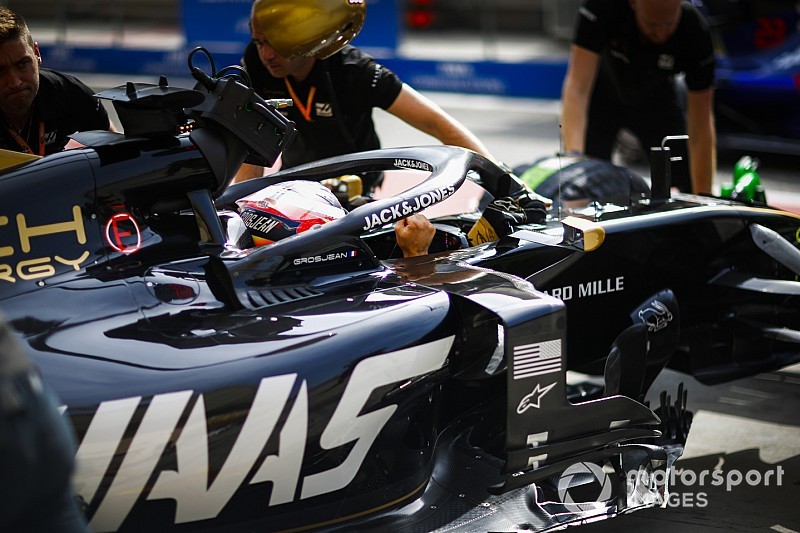 Haas driver Romain Grosjean says the start to his 2019 Formula 1 season has felt like "copy-paste from last year", as an opening-lap clash in Bahrain consigned him to a second straight retirement.

Grosjean failed to score in the first eight races of 2018, with a botched pitstop in Australia and lost bodywork in Bahrain kicking off the streak.

The 2019 Haas car has largely matched the strong early form of its predecessor, at least over a single lap, but Grosjean has again failed to pick up points in the first two races – as a repeat pitstop issue in Melbourne was followed by a collision in Sakhir.

“At the minute a bit copy-paste from last year,” Grosjean admitted after the Bahrain Grand Prix.

“But we're strong and we always came back, so next race is going to be better.”

Starting from 11th after he was penalised for impeding Lando Norris in the first segment of qualifying, Grosjean took a hit from the right-front tyre of Lance Stroll's Racing Point at Turn 2 on the opening lap.

He was forced to pit and was shuffled down the order, before ultimately having to retire from the race after 16 laps.

“I think someone just came and fucking hit me from behind, and that was it,” Grosjean said.

“Car was very damaged anyway, it was a rear puncture, you lose so much time rejoining the pits, and then the car was damaged, so that was it.”

The Frenchman was unhappy to find out that the stewards elected to take no further action regarding the opening-lap incident.

He said: “I won't tell you exactly what I think because it's not going to go well.”

However, Grosjean made it clear that he felt the collision was a direct result of his three-place grid penalty, which both he and his team boss Gunther Steiner had taken issue with on Saturday.

“That's always the risk when you start not where you want to start, and I think we should've started eighth today.

“We were sorry [about blocking Norris] and yes, we didn't do correctly yesterday, but in the end it didn't change Lando's qualifying, didn't change ours.