Maranello, 11 September 2012 – Rick Perry, current Governor of Texas, accompanied by his wife Anita, arrived at the Ferrari Works in the afternoon after he had cheered for the Scuderia Ferrari drivers in Monza last Sunday.

In Maranello Perry met Ferrari Chairman Luca di Montezemolo for a long and friendly conversation. The Governor congratulated Montezemolo for what the Company from Maranello represents in the world, especially in the USA, where Ferrari is the leading edge of “Made in Italy”.

During his visit of different departments the Governor was especially impressed by the work environment, the light and the plants inside the buildings and around them. 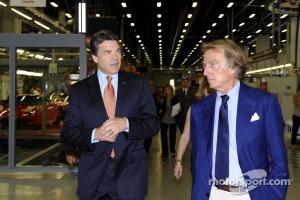 After a short visit at the Scuderia department, Perry went to the Fiorano track, where a 458 Italia and a F12berlinetta were ready for him to experience the emotions the home track in Maranello has to offer.

Governor Perry and Montezemolo bid goodbye and made an appointment in Austin, where, on the 18 November, the 19th and penultimate race in the Formula 1 Championship will be held.