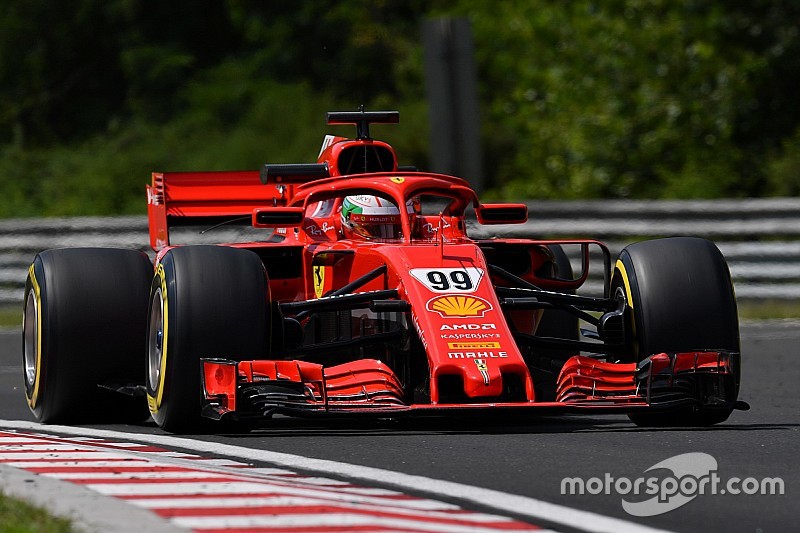 Antonio Giovinazzi says his impressive performance in Formula 1's Hungary test for Ferrari and Sauber is no guarantee he will earn a race drive next season.

The Italian topped the times on day of the Hungaroring test driving for Ferrari, then followed it up with fourth for Sauber on day two.

Giovinazzi's time in the Ferrari was one thousandth faster than Scuderia driver Kimi Raikkonen managed when he took over the SF71H on Wednesday, and he was six tenths faster in the Sauber than race driver Marcus Ericsson.

Asked by Motorsport.com how happy he was with his performance in the context of impressing for next season, Giovinazzi said: "I'm really happy.

"Tuesday was a good day with Ferrari, Wednesday also with Sauber. But because I did a good job is not for sure I will have the seat next year.

"Everything will change, what I will do is my best and we'll see if it will happen or not."

Giovinazzi drove for Sauber in first practice ahead of last weekend's Hungarian GP and will reprise that role at four other GPs before the end of the season.

He is a serious candidate for a drive at the Swiss team next year because of its increasingly close relationship with Ferrari, for whom Giovinazzi is a driver academy graduate and works as a simulator and test driver.

A race drive with Sauber would reunite Giovinazzi with the team he made his only two F1 starts with, having replaced Pascal Wehrlein in the opening two rounds of last season when the German was recovering from injury.

Giovinazzi starred on his debut in Australia, having only been drafted in before final practice, but had a messy second race weekend in China and crashed twice.

Asked by Motorsport.com if he felt he had unfinished business in F1 after that, Giovinazzi said: "You cannot imagine! I really want to go back."

He added: "Now we'll see. I still have four FP1s with Sauber. At the end of the year I hope I can have the seat I want."

Norris says year away from McLaren is an option