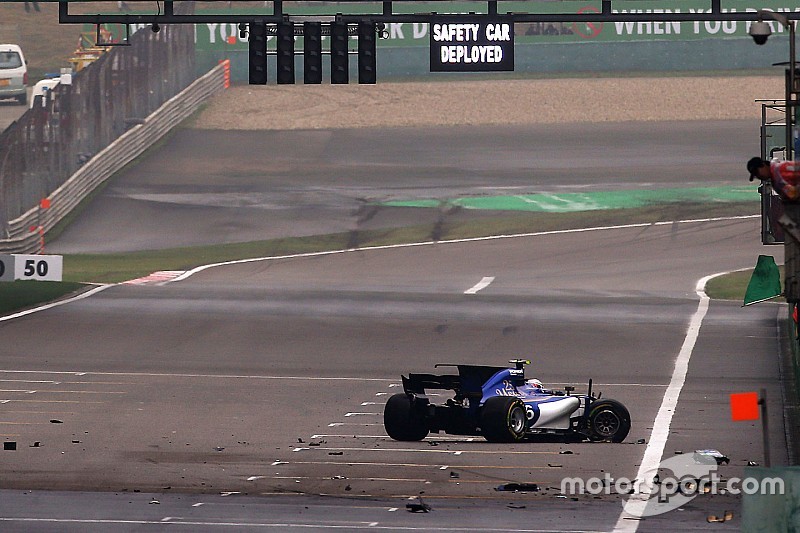 Antonio Giovinazzi admits he hopes to "cancel from my mind" his second grand prix weekend in Formula 1, after he crashed in both qualifying and the race in China.

The Italian earned rave reviews when substituting for Sauber's regular driver Pascal Wehrlein in the Australian GP, having run teammate Marcus Ericsson close in qualifying and going on to finish a strong 12th on Sunday.

But his second weekend with Sauber, as he stood in for Wehrlein again in China, went south in the first qualifying segment, as he crashed on his final effort and couldn't run again despite having advanced to Q2.

He then crashed out on the fourth lap of the race, caught out by a damp patch on the main straight after having just switched to slick tyres.

"It was not my weekend," Giovinazzi said after the race. "I make the first mistake in qualifying and today I just called [for] dry tyres too early.

"When I come back on the track, when I went on the main straight, I just had some aquaplaning and lost the car straight away, nothing [I could] do.

"I want to first of all say sorry to the guys, to the team, because they did a fantastic job all night to rebuild the car for today. So, sorry I make this mistake.

"What's important now is to cancel from my mind this weekend and keep working, and hope I can be back strong for the next time."

Giovinazzi clarified that it was his decision to switch to slicks early, as he made use of the Virtual Safety Car that was called for fellow rookie Lance Stroll's opening-lap retirement.

"I was thinking, to be honest, to maybe start with slicks, but then it was too risky - and to be honest, it made no sense to do this," said the Italian. "So we started with the intermediates.

"But then when I saw the VSC and I saw the track was coming dry, I just decide to call for dry tyres. Maybe it was a bit too early - but it was also Sebastian [Vettel] pitting there, also the front car, they pit for the slicks."

The Italian felt the weather-induced lack of mileage throughout the weekend hampered him in particular due to his lack of experience, but added: "I made a mistake and I need to learn from that."

Giovinazzi, who serves as reserve driver for Ferrari, added he did not know whether he would be racing in Bahrain next week, with the timing of Wehrlein's return still uncertain.

Asked whether he was hopeful he'd get the chance in Bahrain to make up for his China struggles, the Italian said: "Of course, was better ending after Melbourne weekend than now, so I hope I can have another opportunity to show what I showed in Melbourne."

Hamilton: Vettel respect greater than any other F1 driver

Bottas says he must not dwell on "amateur" error in China