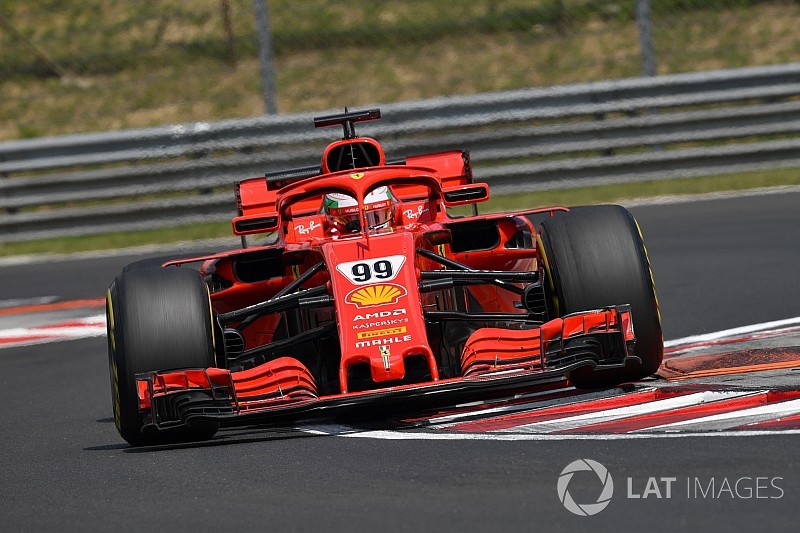 Antonio Giovinazzi lapped more than half a second quicker than Sebastian Vettel’s official circuit record as he used hypersoft tyres to comfortably top day one of Formula 1’s Hungaroring test.

The Italian registered an impressive day behind the wheel of the SF71H by building on his morning benchmark with impressive afternoon times, initially on the medium (1m17.807s) and supersoft tyres (1m16.887s).

His effort on supersofts brought him within 0.7s of Vettel’s lap record, a 1m16.170s set during FP3 for last weekend’s Hungarian Grand Prix.

With just over two hours to go Giovinazzi emerged on hypersoft tyres, not used during the GP weekend, to post two sub-1m16s and settle on a 1m15.648s.

That put him exactly three seconds faster than Sauber driver Marcus Ericsson at the time, before the session was interrupted by the day’s only red flag.

Sean Gelael was the culprit, having crashed his Toro Rosso at the high-speed Turn 11 right-hander towards the end of the lap.

The Indonesian’s shunt occurred shortly after setting his best time of the day, a 1m21.451s. Gelael was conducting Pirelli tyre testing, not Toro Rosso’s own programme.

After a 20-minute delay the session resumed and Ericsson used hypersoft tyres to post a 1m18.155s, 2.5s slower than Giovinazzi.

To offer some context to Giovinazzi’s hypesofts lap, compared to what Vettel managed at the weekend on ultrasofts, Ericsson’s P2 time was 0.7s faster than the effort he had recorded in FP3 on ultras.

Ericsson was not the only driver to improve after the stoppage, with Brendon Hartley going third-quickest for Toro Rosso on a 1m19.251s.

The Kiwi also used hypersoft tyres to do so, while Lando Norris improved to a 1m19.294s on softs to end the day fourth-fastest for McLaren.

A brief but heavy rain shower hit the Budapest circuit with an hour and a half remaining, which did not curtail all track action but did prevent further improvements while only Ricciardo and Norris hit the circuit to lap on intermediates.

Norris’s Formula 2 title rival George Russell wound up fifth and capped a low-mileage day for Mercedes by completing just 49 laps, the fewest of any driver, in part due to a gearbox issue.

Ricciardo emerged on supersofts after Gelael’s crash and posted a personal best first sector before pitting at the end of the lap.

He was one of three drivers to trial an experimental front wing built to F1’s 2019 regulations over the course of the day.

Nicholas Latifi (Force India) and Oliver Rowland (Williams) were the others, as they spent a rare day behind the wheel for their respective teams conducting experimental work as well as completing a more conventional programme.

Latifi was seventh-fastest and Rowland ninth, with Renault’s Nico Hulkenberg in between. Gelael ended up slowest of the 10 drivers and did not emerge again after his crash.

Mercedes admits strategy asked too much of "valiant" Bottas