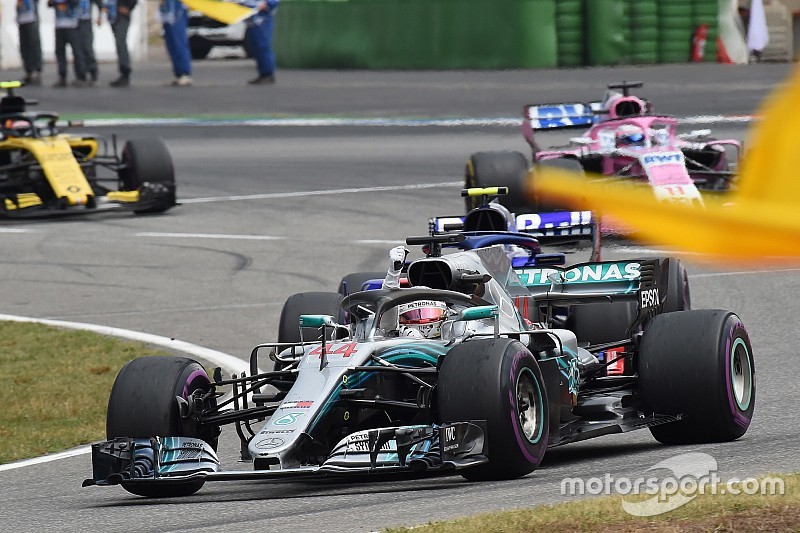 A race that looked set to substantially bolster Sebastian Vettel's world championship advantage, as he led from pole while Hamilton had to battle through from 14th on the grid, ended with Hamilton leading the standings by 17 points having taken a shock win after Vettel crashed out in the late rain.

Villeneuve compared that swing to Singapore last September, when Hamilton won on a weekend Mercedes had been struggling and Vettel was wiped out in a first-lap crash involving his Ferrari teammate Kimi Raikkonen and Red Bull's Max Verstappen.

That left Hamilton with a 28-point lead, and by the end of the following month he had sealed the 2017 title with two races to spare.

"The effect could be similar to Singapore last year," Villeneuve told Motorsport.com.

"Lewis completely down, depressed, [thinks] everybody hates him and so on. That was his attitude, even before the race. His comments were completely down.

"And he's given this, 25 points. This is what happened in Singapore, if I remember well.

"And from Singapore he was unbeatable. He had this mindset for three or four races that no one could beat him.

"Maybe that's what we will get now. It was costly [for Vettel]. And it may push Lewis into a very positive state of mind."

Though Villeneuve admitted that Vettel's Hockenheim crash was "unnecessary because he had the lead and the lead was on his teammate", he said the error was completely understandable in the tricky conditions.

"It's a very easy mistake to make. You just never know how much water there is," he said.

"It's easy from the outside to say, 'what a stupid mistake'. It's so easy to make in those kinds of conditions."

Villeneuve also dismissed any complaints about Mercedes asking Valtteri Bottas not to attack Hamilton for the lead in the race's closing stages.

"Why should be people be upset?" he said. "The teams are trying to win the championship. They do whatever it takes.

"But there is no way you can ban them when the stakes are so high."

Tributes pour in for Sergio Marchionne