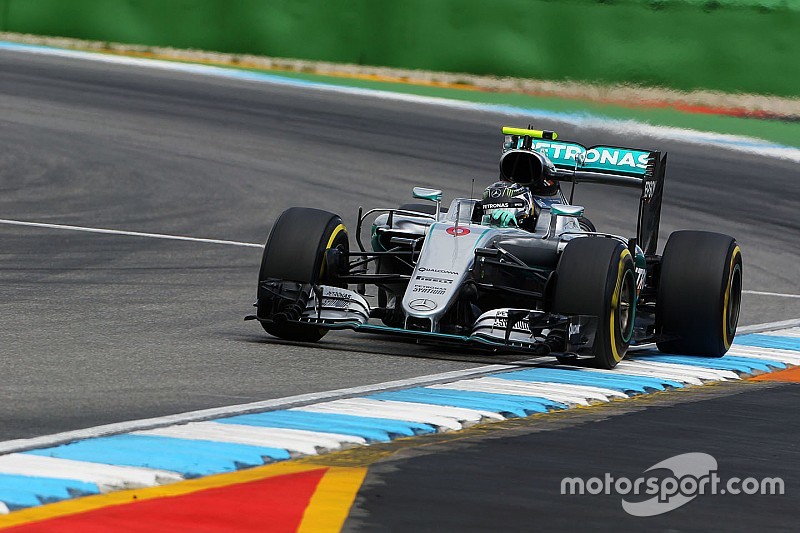 Nico Rosberg completed a clean sweep of fastest times in practice for the German Grand Prix after going quickest in FP3.

Rosberg had been fastest in FP1 and FP2 and again topped the times in the final session ahead of qualifying later today.

The German outpaced teammate Lewis Hamilton by 0.057s in a closely-matched session, with Daniel Ricciardo third in the Red Bull, just 0.099s off Rosberg.

Nico Hulkenberg completed the top 10 in the Force India.

The session kicked off with 38C degrees on track and under clear skies, with Pascal Wehrlein the first driver to register a time in the Manor as the leaders took it easy.

Verstappen moved to first position 10 minutes in with his first run on soft tyres, before he was outpaced by Valtteri Bottas in the Williams with a 1:16.889, the Finn using the supersofts for his first outing of the day.

Vettel briefly took to the top of times at the 17-minute mark before Rosberg completed his first lap on supersofts to relegate the Ferrari driver to second.

Rosberg did not last long in first place, as Hamilton posted a 1:16.015 seconds later to outpace his teammate by slightly over a tenth.

After he went quickest, however, Hamilton was put under investigation for an unsafe release following a scare involving Haas driver Romain Grosjean.

The Frenchman had a bigger scare moments later when he lost control of his car at Turn 3, spinning into the grass.

"Guys, are you sure the aero is correct? I don't know what's happening with the gearbox," complained Grosjean, whose Haas team would later announce he needed a gearbox change that will translate into a grid penalty.

Hamilton went even quicker to open a gap on over three tenths at the head of the times, the Briton's 1:15.795 still slower than yesterday's benchmark.

With 25 minutes left, Ricciardo and Button sat at the bottom of the timesheets after having failed to register a laptime.

The duo finally completed their first timed laps a couple of minutes later, as Ricciardo's teammate Verstappen reported that his battery was not charging.

Button, however, was far from happy with the handling of his car, complaining of a "very loose rear".

With 22 minutes to go, Rosberg went fastest by 0.057s after a run with new supersoft tyres.

Raikkonen moved up to third, just 0.164s behind Rosberg, with some 10 minutes left on the clock. The Finn would be relegated to fourth five minutes later as Ricciardo improved to finish less than a tenth behind Rosberg.