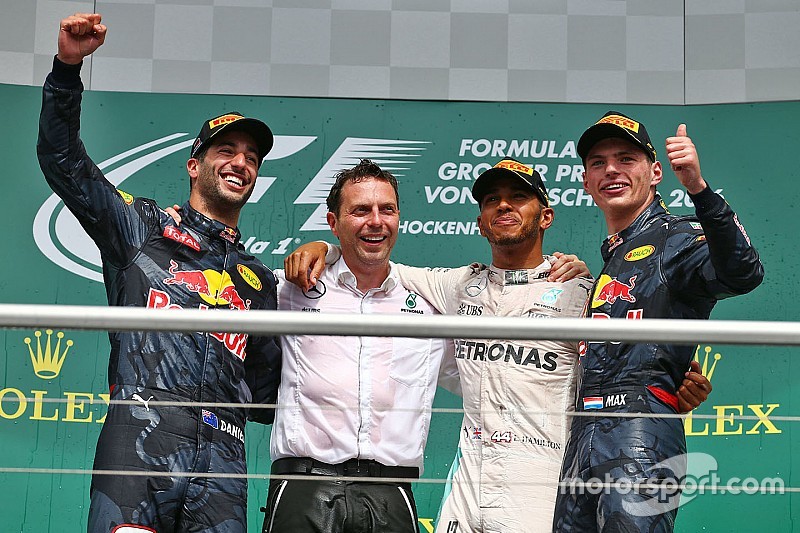 Lewis Hamilton dominated the German Grand Prix at Hockenheim, but Mercedes teammate Nico Rosberg could only finish fourth after a controversial penalty for a move on Max Verstappen deemed illegal by the stewards.

Rosberg, who won the last time F1 raced here in 2014, made a terrible start from pole and dropped to fourth on the opening lap behind the two Red Bulls.

His pass on Verstappen at the Spitzkehre hairpin dashed his podium hopes, however, as stewards ruled he forced Verstappen off the track – although Rosberg argued that Verstappen had moved in the braking zone, which tightened the corner’s exit for him.

After taking his 5s penalty in the pits, Rosberg was unable to chase down the Red Bulls.

In his 100th Grand Prix, Ricciardo finished second – although Verstappen had passed him at the first corner. Unlike at Barcelona earlier this year, an alternate tyre strategy between the Red Bulls played into Ricciardo’s hands.

Ferrari was unable to enter the frontrunning fight again, finishing fifth and sixth with Sebastian Vettel ahead of Kimi Raikkonen.

From pole position Rosberg made a poor start, dropping to fourth behind Hamilton and Verstappen, the latter driving around the outside of Ricciardo via the kerbs at Turn 1.

Hamilton led lap one by 1.3s from Verstappen, with Ricciardo defending from Rosberg. Vettel got ahead of Raikkonen for fifth, with Valtteri Bottas seventh for Williams from Nico Hulkenberg (Force India), McLaren’s Jenson Button and Felipe Massa’s Williams, who complained “somebody hit me”.

His assailant was Jolyon Palmer’s Renault, which had to pit for repairs. “After the guy hit me, the rear of the car is not the same,” said Massa, who tumbled down the order and would later retire.

Rosberg made a concerted effort to pass Ricciardo on lap two, but was elbowed wide in the Mercedes Arena having drawn alongside.

The race quickly settled as the drivers nursed their supersoft tyres to their target lap for the first pitstop. Verstappen complained he was “struggling with the rear tyres” as Hamilton set fastest lap by half a second on lap nine and pulled 5s clear out front.

Verstappen and Rosberg were the first of the leaders to pit, both rejoining on supersoft tyres – with Rosberg losing 1.3s due to a slow left-rear change and then getting mired in traffic.

Ricciardo pitted on the next lap for softs, as Hamilton banged in a sequence of fastest laps.

Hamilton stopped at the end of lap 14, switching to soft-compound tyres, having held a 16s lead over Raikkonen, who also pitted. Hamilton rejoined with a 6s lead over Verstappen, Ricciardo and Rosberg – who set fastest lap on his new rubber.

Raikkonen had a slow first stop as he switched to softs, and rejoined 4s in arrears of Vettel, who was already 5s behind Rosberg.

Raikkonen questioned whether they changed the front wing flap angle for the harder tyres “because it doesn’t feel like it”, and he was told they had.

Rosberg pitted for his second stop at the end of lap 27, switching him to the soft tyre, a move mirrored by Verstappen on the following lap. He rejoined just ahead of Rosberg, who lunged him from a long way back and elbowed him aside at the first opportunity at the Spitzkehre hairpin.

“He pushed me off the track,” alleged Verstappen, who ran wide over the kerbs on the exit. “Can you tell them I was at full steering lock and I couldn’t steer more," argued Rosberg. “He moved in braking, that was the big problem.”

Stewards investigated the move, and gave Rosberg a 5s penalty for “forcing another driver off the track”.

Vettel went back on to supersofts for his third stint, and Riccardo followed suit on lap 33 – dropping behind both Rosberg and Verstappen. Hamilton pitted for the second time on lap 34, also switching to the supersoft, rejoining 5.7s ahead of Rosberg and pulling away.

Ricciardo caught Verstappen just after half distance, and DRS-ed past him for third on lap 40.

“I’m even struggling on this tyre with understeer,” said Verstappen of the softs.

Ricciardo caught Rosberg, just as the German made his final stop – which included the 5s time penalty, which appeared to take longer than required. Rosberg rejoined on the softs in fourth, 5s behind Verstappen after he too had stopped, but could make no impression on the Red Bulls ahead.

Vettel overruled Ferrari’s timing of its final stop, as he felt happy on his supersofts. “Who do you want to undercut, they’re miles away?” questioned Vettel, who was told “Verstappen.”

Red Bull pushes to the finish

Hamilton stopped for the final time on lap 48, taking softs for his last stint. He rejoined 10s clear of Ricciardo, who had Verstappen 2s behind. “Let’s have a little push to make the gap to Verstappen,” Ricciardo was told.

The Red Bulls unleashed their raw pace at this point, which was even faster than Mercedes at this stage on new, softer tyres.

Ricciardo carved 3s out of Hamilton’s lead on his supersofts, but the leader raised his pace with 15s to go and they matched each other’s pace to the finish.

Behind the Mercs and Red Bulls, the Ferraris trailed home in fifth and sixth. Hulkenberg passed a struggling Bottas for seventh with six laps remaining – just as light rain began to fall.

Button passed Bottas, whose soft tyres had hit the cliff and was touring around, for eighth.

Force India’s Sergio Perez nailed Alonso for the final point with an aggressive move with two laps to go.

Haas’s Esteban Gutierrez, the only driver who started on the soft, found himself embroiled in an entertaining scraps with Alonso and Perez at the end of his long first stint. He finished 12th.

Grosjean finished 13th despite reporting “smoke coming from the rear of the car” at one point. Toro Rosso’s Carlos Sainz finished 14th after an awful first pitstop, ahead of teammate Daniil Kvyat.

Marcus Ericsson finished 18th, ahead of the delayed Palmer and Haryanto. Felipe Nasr was a late retirement when his Sauber ground to a halt in the pitlane.