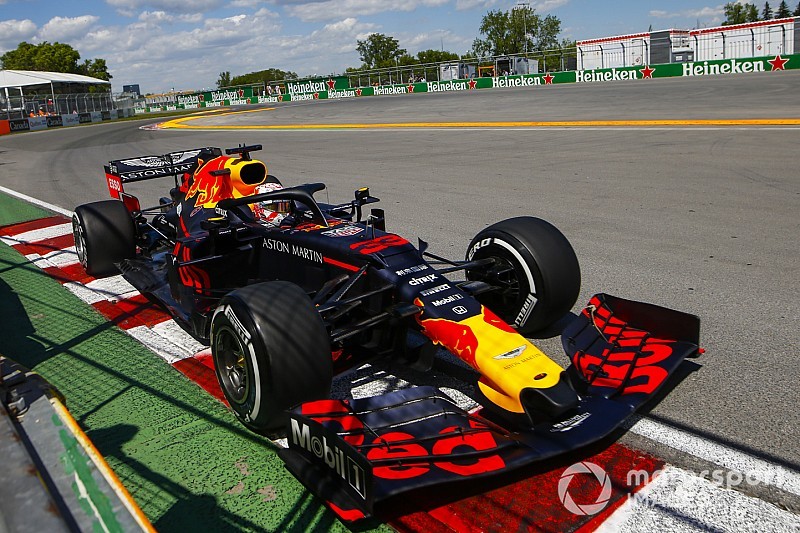 Pierre Gasly says he didn’t see Red Bull teammate Max Verstappen coming up behind him, after their incident in Canadian Grand Prix practice when the Dutchman clouted the infamous Wall of Champions.

Verstappen damaged his right-side wheels following a brush with the wall in the afternoon session, having lost downforce as he rapidly closed in on Gasly ahead of him.

Speaking about the incident, Gasly said he was only made aware that Verstappen was coming up behind him at the last moment when the team told him over the radio to speed up.

“They told me quite late when I was preparing my lap behind Romain [Grosjean], he said. “When they told me I started to push and then he was five seconds behind.

“They told me he hit the wall, but I didn’t exactly see what happened. I was trying to prepare my lap but I am sure we will see and talk about it.”

Verstappen was also unsure about how circumstances had played out, having lost some track time as he ended the afternoon session in 13th place - just one spot behind his teammate.

“I had Pierre in front of me and I think he was told to speed up, but I don't know exactly what happened then,” said Verstappen. “I arrived into the chicane, understeer, and yeah, basically in the wake of his car I understeered into the wall.

“It’s a shame. We missed a bit of running because of that, but when we were running I think we looked quite decent. Not perfect but we still have some work to do.”

Although Red Bull had a difficult day, with both drivers struggling for grip around the Circuit Gilles Villeneuve, Verstappen still reckoned there was no major drama.

“At the moment I think we still need to improve a little bit, but it's not like something dramatic or anything,” said the Dutchman. “Just fine-tuning bits, also with the track being so slippery today, things are not in our favour. There is a bit of work to do.”

Asked where he expected Red Bull to be over the remainder of the weekend, he said: “Well at the moment I think today we would've been P4. I think Carlos ended up in P4, so we should be ahead.”

Gasly was more cautious though about the prospects of being able to challenge the pace-setting Mercedes and Ferrari teams.

“I think today was a bit difficult,” he said. “And we are lacking a bit of grip overall so we need to analyse a bit more tonight and try to come up with more solutions tomorrow.

“But it is only Friday and I think tomorrow we will have a lot more performance, [after] analysing everything tonight. I don’t know exactly if we are going to be able to be with them, I think it will be difficult, but we will try everything we can.”

Hamilton: FP2 "like sitting in headmaster's office" after crash