Gasly has "no clear answer" for Hungarian GP struggle 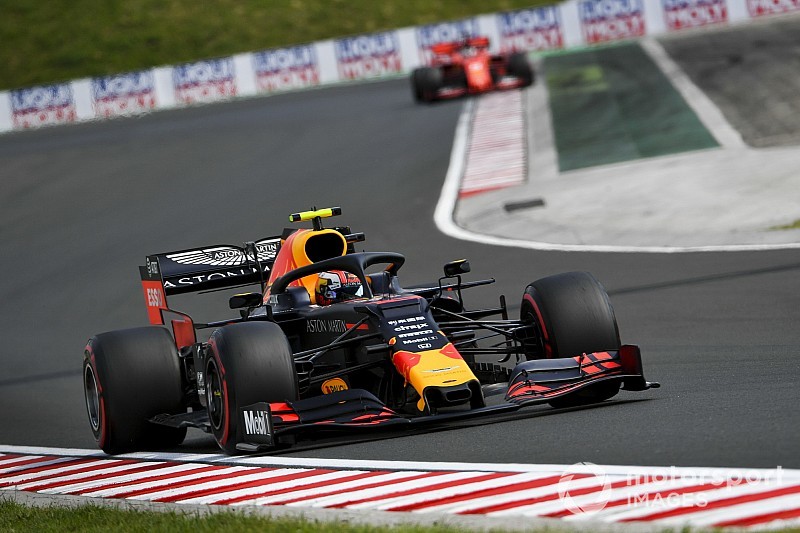 Red Bull's Pierre Gasly says he has no answer as to why his pace fell away over the Hungarian Grand Prix weekend.

The Frenchman had been strong on the opening day of action, and even pipped teammate Max Verstappen to top the second practice session.

But he failed to make progress from there and after being almost 0.9 seconds slower than Verstappen in qualifying, he had a disappointing race as he came home in sixth spot.

Afterwards, Red Bull team boss Christian Horner was clear that Gasly's lack of form 'hurt' the team in its fight with Ferrari in the constructors' championship and suggested the outfit 'desperately' needed him to improve quickly.

Gasly said he was baffled by what had gone wrong at the Hungaroring, with his car never feeling as good as it did after Friday.

"We had a strong Friday, things started pretty well during the weekend and then from FP3 onwards I just lost a lot of pace and struggled a lot more with grip in general," said Gasly. "Qualifying was difficult.

"It wasn't maximised, but we clearly didn't have similar pace to fight at the top and again the race was the same. We need to understand exactly why we lost so much pace and struggled that much, and come back stronger in Spa."

Gasly say that only a "couple of details" were changed on the car between Friday and Saturday, and he is not sure that these tweaks offer the full answer.

He also has no proper explanation for why the last two races have been more of a struggle of him in the wake of his best weekend of the year at the British Grand Prix.

Asked by Motorsport.com if he understood what had happened, he said: "Not really I think.

"The weekend, as I said, started well. And we had good pace, even compared to the other guys, better than usual. And then yeah, from FP3 was just different. So yeah, no clear answer at the moment. Just need to understand and analyse with the guys.

"So I think it is good for everyone to have a break now, switch off and also review the first few months: What went well, and what we could have done better with the guys, and yeah, just come back stronger for the second part of the season.

"I think for sure there's been a lot of lessons learned since the beginning of the year. There is still some more to do, but yeah, we'll take the time to make sure we come back sharper for the second part of the season."

Asked if the speculation over his future meant he raced more cautiously, Gasly replied: "No. I don't really pay attention to this kind of thing. I just try to do my job as good as possible, work with the guys and that's the only thing I do."

McLaren: Hungary result a "big boost" for remainder of 2019