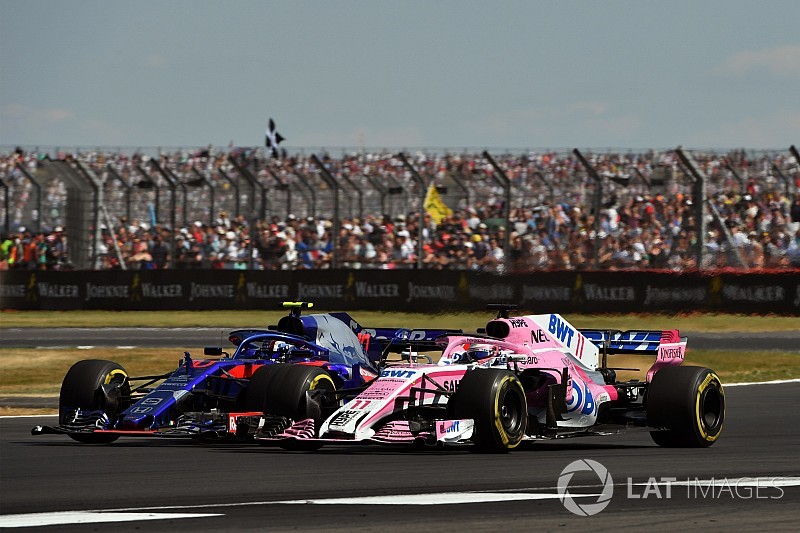 Pierre Gasly says that the decision of the FIA stewards to hand his 10th place in the British Grand Prix back to Formula 1 rival Sergio Perez was "completely ridiculous".

Gasly made contact with Perez in the closing laps of the race as they battled for 10th place, and an investigation was launched after they made contact when the Toro Rosso driver made a successful pass.

After reviewing the incident the stewards handed Gasly a five-second penalty, which promoted Perez to 10th and dropped him back to 13th, with Stoffel Vandoorne and Lance Stroll also benefiting.

The Frenchman has called for more consistency after comparing his incident with other recent instances where no action was taken.

"For me it's ridiculous, completely ridiculous," Gasly told Motorsport.com. "That's racing, and honestly there was really small contact.

"It happens sometimes. We have a 2m wide car, on a track which is probably 12m wide, so at some point sometimes you have contact. Clearly this wasn't a big hit. For me it didn't deserve to have a penalty.

"They need to do something. To be inconsistent like this in unacceptable at a high level. There is nothing which explains such a penalty. If they don't do things for others, then they shouldn't penalise this."

Gasly wasn't surprised that Perez presented a strong case to the stewards.

"Of course, he finished P11 without a point, so he tried to blame me as much as he can. I've told him honestly I enjoyed the fight, it was close racing, close wheels, and at the end of the day, we are racing drivers, that's what we should push for.

"By doing this sort of penalty it's just stopping us from racing, so it's a big shame.

"Doing this pushes the drivers not to take any risks, and have boring races, and no overtaking except on the straight with the DRS, which is honestly not exciting at all."

Gasly said it was particularly frustrating to lose a hard won points, and hinted that he would like the team to appeal the decision.

"It was a one point, when we're not consistently in the points, everything is valuable. I'll push and maybe we'll do an appeal."