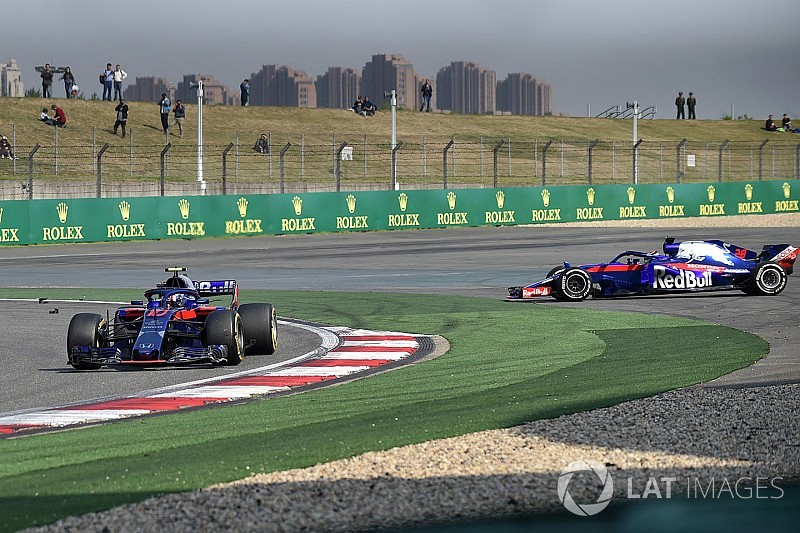 Toro Rosso drivers Brendon Hartley and Pierre Gasly have revealed their Chinese Grand Prix crash was the result of a "miscommunication” over a planned position change.

Gasly was coming up 18th-placed Hartley on fresher tyres at the midpoint of the race, and ended up pitching his teammate into a spin as he attempted to get past down the inside of the Turn 14 hairpin.

The clash resulted in what ended up a race-changing safety car and was swiftly followed by a penalty for Gasly, who was eventually classified 18th to Hartley's 20th.

Speaking to media after the race, Gasly made it clear that he believed Hartley had been instructed to let him by – and that he was caught by surprise when the Kiwi turned for the corner as normal.

"They told me on the radio 'okay, Brendon is going to let you pass, at the end of the straight'. So I expected him to let me by, I went on the inside.

"I expected him to leave me a bit of space to turn, and finally when he started to turn like normally and I was on the inside, was too late and there was nothing I could do.

"I tried to brake and avoid him, was way too late, we made contact and basically that was it.

"It was a shame, because of course the last thing you want is to have contact with your teammate, just a shame, but I think we misunderstood each other.

"I expected him to do something and he probably expected something else."

Gasly revealed that the team had discussed position swaps before the race and that Turn 14 was the agreed spot for switching cars.

And Hartley, for his part, insisted that he was going to let his teammate through on exit of Turn 14, rather than corner entry, as this was how he had done it in the first stint.

"It was clearly a bit of miscommunication," Hartley said.

"We switched positions on the first stint as well because I was struggling on the ultrasofts, I let him by on the exit of Turn 14 and the second time I was asked, I planned to do the same.

"But my feeling is he must have thought that I was opening the door on the entry, which was not the case."

The incident yielded a 10-second penalty for Gasly and two penalty points on his licence.

"I mean, there was nothing we could do," said Gasly about the sanction. "For sure on TV I think looks really bad for myself, but with what we had said, it was pretty clear that we'd make the driver swap there, I never expected him to turn like this.

"So of course, if we would've been in a fight, I would not have tried this."