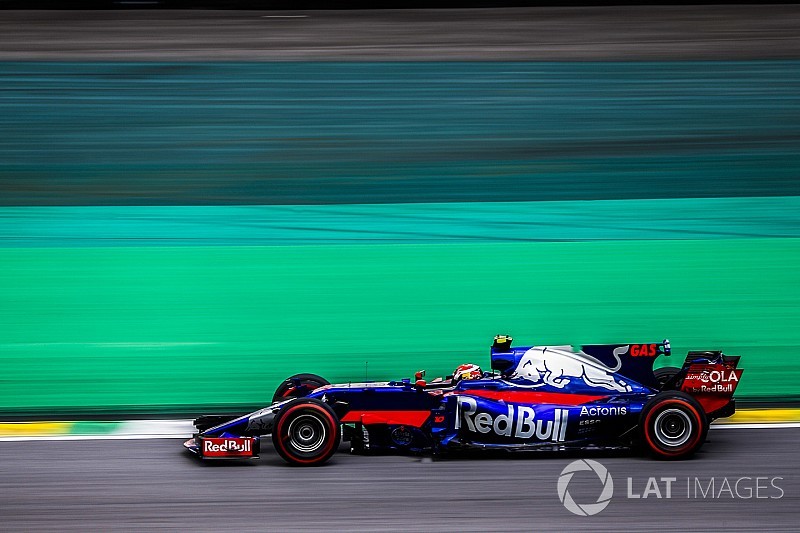 Toro Rosso driver Pierre Gasly has revealed he "completely lost power" from his Renault engine 200 metres before the finish line on the final lap of Formula 1's Brazilian Grand Prix.

While teammate Brendon Hartley retired just over halfway point in the race – continuing Toro Rosso's recent run of reliability woes – Gasly made it to the end in 12th, a lap down on race winner Sebastian Vettel.

But Gasly's Toro Rosso did not have a trouble-free run either, the Frenchman slowing on the main straight on the final tour as he took the chequered flag at 60km/h.

"I knew there was something wrong going on because every lap they were like 'yeah, oil transfer, oil transfer' - and I knew we had old-spec MGU-K so I was like 'f***, hopefully it's going to last until the end'," Gasly said.

"And then actually 200 metres before the finish line I was full throttle and I lost completely the power on the car.

"I don't know exactly what was the problem but there was definitely something."

The close call at the end aside, Gasly – who now has four Formula 1 grand prix starts to his name – felt the Interlagos race was his best in the championship thus far.

"It was good," he said. "We knew it would be difficult starting from 19th. But watching the races from the past few years, I knew the start was key if we wanted to have a decent race.

"So, I went on the outside into Turn 1, which worked out pretty well, I overtook maybe three cars Turn 1, then one [car into] Turn 2, then after all the mess in front of me I just stayed flat out and tried to avoid everyone.

"I would say in terms of performance we extracted everything we could. At the beginning of the first stint I could stay quite close to Carlos [Sainz] - and then after they picked up the pace and [we] were quite limited with the degradation, so I don't think we could've done much better.

"Finished 16 seconds behind the Renault, I think definitely our best race and best performance since I arrived in Malaysia."