From backmarkers to the podium in four races: What's McLaren’s real form?

One of the most intriguing and unpredictable storylines of the 2022 Formula 1 season so far has been the form of McLaren.

Having emerged from the first pre-season test at Barcelona looking to be Ferrari’s main rival, it then endured a challenging few weeks in the Middle East.

A disastrous Bahrain test, triggered by unexpected brake problems, was followed by an equally miserable season opener when it failed to score any points.

From high hopes of it building on its best-of-the-rest tag in 2021, suddenly the season looked like it was going to be an ultra difficult one for the Woking-based squad.

Signs of progress in Saudi Arabia, and even better form in Australia with a double points haul for Lando Norris and Daniel Ricciardo, were put down to the tracks being better suited to the MCL36.

But then at Imola, a circuit where the team had done well last year, Norris delivered it a podium finish as the squad’s campaign was injected with a lot more optimism. 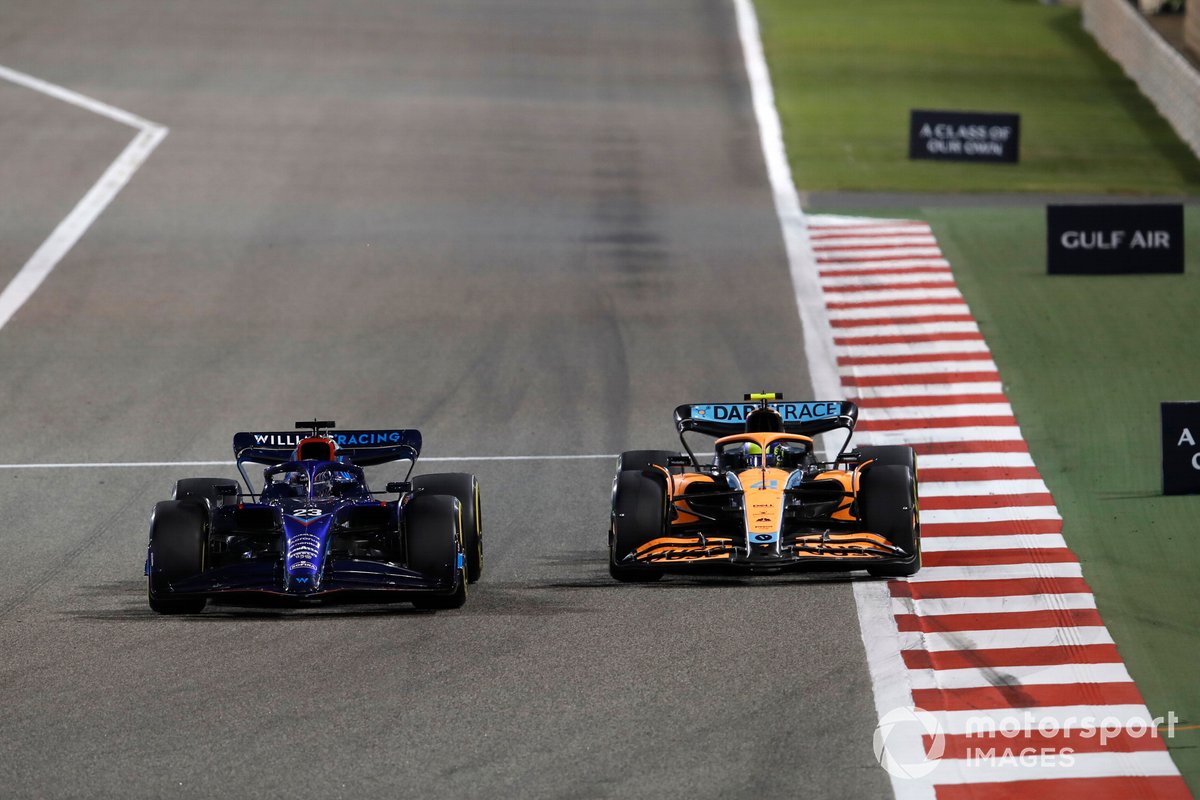 McLaren started on the back foot in Bahrain, battling Williams outside the points

With such a rollercoaster of lows and highs, it has been hard to get an understanding of where the real McLaren form stacks up – and how much of its form has been down to more favourable circuits, and how much down to the package.

But for McLaren team boss Andreas Seidl, the feeling within the squad is that actually the recent pace is the more realistic picture – and it is the Bahrain slump that is the standout from the norm.

“My assessment is that if you look back on how everything went from the first test onwards in Barcelona, then I think we had a decent test in Barcelona, with a car that was fundamentally working,” he explained.

“Then obviously we experienced this big setback, losing all these laps in the Bahrain test, which then ended up I think in consequences for the Bahrain race weekend. That was because of a compromised solution for the brakes, but also because of losing all those laps and the ideal preparation to get the season started in a completely new car.

“With having the race at the same venue where the test happened, everyone gained so much experience and I think it made us look definitely worse than we actually are with the package.

“Then I think going to Jeddah, and then going to Melbourne, I think the more laps we did, the more time we had, and we could recover from all of the laps that we lost at the test. That’s why I think a part of our performance was just coming back to the package that was there anyway.”

What the extra time of running with the car has given McLaren, though, is a level of confidence that there is much more potential in the MCL36 than was shown in Bahrain.

“I think there’s nothing fundamentally wrong with this car,” added Seidl. “At the same time, it is clear that, when you look at the performance gap you’re having, with a weekend like in Melbourne, we miss performance, and that’s why we are working hard in order to bring performance.

“That’s the aim for the moment, while in parallel we are working on the upgrades that we want to bring in the future.” 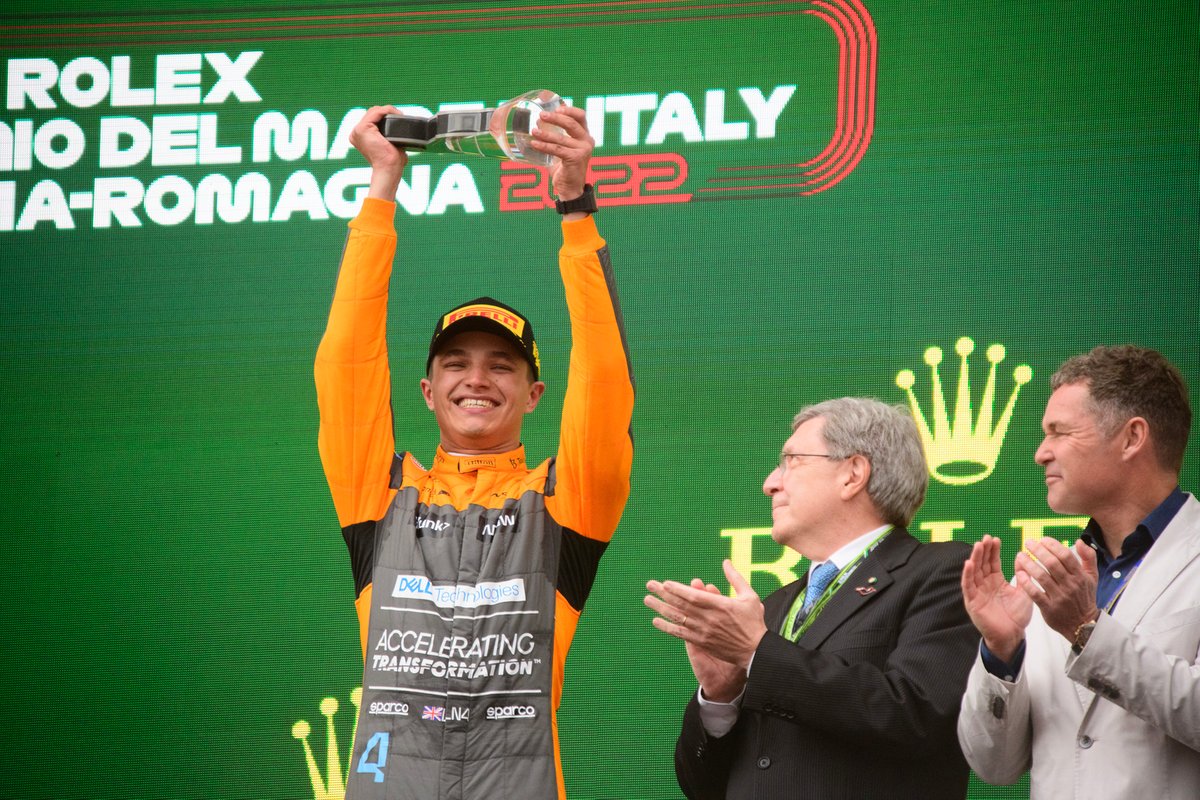 Lando Norris scored a podium in the fourth race in Imola

Norris’ podium at the Emilia Romagna Grand Prix certainly owed a little to the misfortune of others – with Ferrari enduring a nightmare day, as Carlos Sainz was out on the first lap and Charles Leclerc threw away a top three finish with a late spin.

Nevertheless, both its drivers have faith that recent experiences with the car show that fighting at the front end of the midfield pack – with Alpine, Haas, Alfa Romeo and Mercedes – is something that can be anticipated now.

For rather than the better races recently being the result of major changes to the car, Norris is convinced the team has simply just got on top of its package much better.

“I think what we’re now seeing more is Bahrain was a bit more of an outlier compared to the last few weekends,” explained the Briton. “It was still reality at the time.

“I think a lot of what we saw is still on the car. But we’ve just understood it more, we’re extracting more out of the car for sure. It’s just we’ve worked on the weaknesses and we’ve made some improvements, and that’s shown quite a bit. There’s a lot of positives from it.

“But I think we’re not comfortably third-quickest car today, I would say. A few of those things in Bahrain are still on the car, and we’re trying to figure out part of it. The majority of it, we’ve focused on and made some improvements on, and I think that’s why we’re better now.”

McLaren is keeping the update plans for its MCL36 close to its chest, as it sets about bringing more downforce and trimming weight from the car over the next few races.

But judging by how much progress has been made so far in 2022, could the squad now even find that its current momentum carries it nearer the likes of Red Bull and Ferrari?

Ricciardo thinks that might be a tad too optimistic.

“Don’t get me wrong, at least sitting here today, sure, it’s a bit of an optimistic ambition to be better than that third-best team, because the top two are a good step in front,” he said.

“But I think there is still a lot to learn with these cars, and naturally not only us, but every team will bring updates. And even a team like Mercedes with their philosophy, maybe that comes to life at some point this season.

“I think there is a lot of scope for development and improvements, not these one-tenth and two-tenth improvements. I think there’s potential for bigger four, five-tenths.

“Look, it’s still ambitious because Red Bull and Ferrari will keep developing, so the target is always going to be moving. But yeah, I’m still let’s say definitely more glass half full that we can still find something perhaps a little more at some point.”

For Seidl, the focus is very much on simply trying to get the consistency that can help it battle for third, rather than try to dream it can be up there going wheel-to-wheel with Max Verstappen and Charles Leclerc.

“The gap we have between Red Bull and Ferrari is huge and these guys will not stand still as well,” he explained.

“So, independent of how this season started and where we are right now, we know exactly where we stand as a team. Compared to these guys, we still know about the deficits we are having, so there is no magic.

“But we all want to be ambitious. We wake up in the morning because we want to fight these guys and give it all, put up a good fight.

“We try to find shortcuts, but sometimes you need to stay realistic. That's how I see it, and we will give it all.

“Hopefully there are other races coming again similar to previous years, where certain car characteristics actually suddenly turn around the pecking order for one or two races like we’ve seen in Monza for us for example last year. It could happen this year, and it would be great.

“But the most important thing for me is that we move forward, continuously, get our infrastructure in place to make sure we get to the point in a couple of years to fight for race wins every race weekend.”