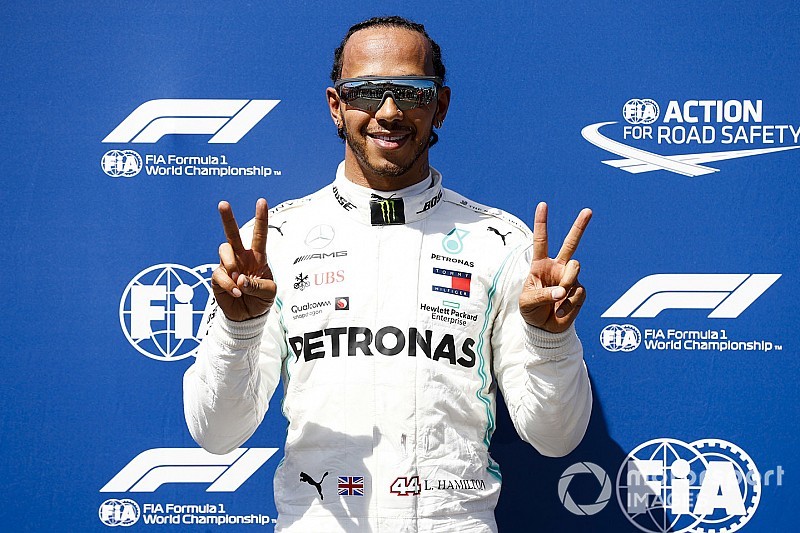 Mercedes driver Lewis Hamilton claimed his third pole position of the 2019 Formula 1 season in qualifying for the French Grand Prix.

Teammate Valtteri Bottas had a slender advantage at the top of the timesheets in both Q1 and Q2, but Hamilton took top spot on the first runs in Q3 with a lap of 1m28.448s.

Hamilton then improved to a 1m28.319s on his second lap to secure pole position.

Bottas had a scruffy lap and was unable to improve on his first run pace, meaning he ended up 0.286s behind Hamilton.

Charles Leclerc was the lead Ferrari, 0.646s off the pace in third and well ahead of fourth-placed Max Verstappen.

Red Bull driver Verstappen also struggled during qualifying, ending up more than four tenths slower than Leclerc and only 0.009s quicker than the lead McLaren of Lando Norris.

Carlos Sainz was sixth fastest, just over a tenth slower than his teammate, to cap McLaren's strong performance throughout practice and qualifying.

Ferrari driver Sebastian Vettel was only seventh, 1.480s off the pace, having abandoned his first qualifying run.

Vettel reported a missed upshift, and also had a moment at Turn 1 and a later off-track excursion on his first run, then wasn't able to string together a strong lap on his second set of soft tyres.

Renault driver Daniel Ricciardo was eighth, just over a tenth slower than Vettel and ahead of the second Red Bull of Pierre Gasly.

Alfa Romeo's Antonio Giovinazzi was 10th fastest, although his one attempt in Q3 did not go well after his late lap in Q2 allowed him to make the final stage of qualifying.

Eight of the top 10 will start the race on mediums having used that tyre to set their Q2 times, the exceptions being Giovinazzi and Gasly – who both used softs.

Toro Rosso driver Alex Albon was bumped down to 11th place at the end of Q2 by Gasly, who nicked the final Q3 slot by just four hundredths of a second.

Kimi Raikkonen was unable to match teammate Giovinazzi's late session pace and ended up 12th, just ahead of Nico Hulkenberg – who attempted to make it through to the top 10 shootout using mediums on his second run.

Racing Points Sergio Perez was 14th, seven tenths faster than the Haas of Kevin Magnussen.
Daniil Kvyat, who must start at the back thanks to grid penalties for taking Honda's 'Spec 3' turbocharger and V6 – on top of other engine component offences – was fastest of those eliminated in Q1.

He was bumped in the final moments of the session by Toro Rosso teammate Albon, who is not running the latest-spec components.

Haas driver Romain Grosjean was bumped into the drop-zone by improvements by Perez and Ricciardo, with his attempt to escape stymied by the rear stepping out in the chicane and spitting him off track.

Lance Stroll continued this season's run of Q1 eliminations in 18th place having jumped back ahead of the Williams of George Russell on his final attempt.

Russell is carrying two 10-place grid penalties after the Williams team was forced to change his Mercedes control electronics and energy store following an electrical power loss that restricted him to four laps in final practice.

He qualified 19th after moving onto his third control electronics and energy store of the season, having already changed both following his bizarre drain strike during Azerbaijan Grand Prix practice.

Russell outpaced teammate Robert Kubica by 0.416s in the battle for 19th, but the Pole is set to start 18th thanks to penalties for others.

Leclerc explains why he asked Ferrari to hurry Vettel