Formula Sochi announces interim results for the construction of the Formula 1 Russian Grand Prix circuit which will they hope will hosts other series events including the WEC, MotoGP, Formula 3, and WTCC.

The circuit operator and organizer of Formula 1 Russian Grand Prix, "Formula Sochi" takes an active part in the construction of the autodrome, and develops long-term race implementation plan.

Alexander Bogdanov, CEO of "Formula Sochi": "The construction of the racing track in Sochi is going into high gear. The 5854 m long circuit is one of the longest in the Formula One World Championship. The autodrome will also host different racing series such as FIA GT World Series, FIA WEC, WTCC, Formula 3, and Russian national championships. We are working through the possibility of hosting motorcycle racing of highest level: Moto GP, World Superbike, and others. 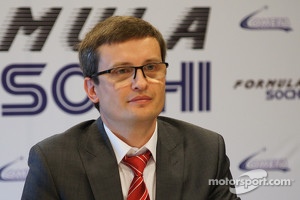 "More than a thousand engineering personnel and workers and 110 units of construction machinery are involved in the construction by OJSC "Center of "Omega", the developer of the Formula 1 Russian Grand Prix circuit. All the work is aimed at achieving the best quality of the future racing track. Control over construction is performed by designing company Tilke GmbH and Russian experts.

"Summing up 2012 results, it is safe to say that the company "Formula Sochi" gets into gear in the preparation of the Russian stage of Formula 1 Grand Prix, which includes the enhancing of working relations with international promoter. Close coordination with the group of Formula 1 companies headed by Bernie Ecclestone gives us a confidence that the Russian Grand Prix will be organized on time and at a high level."

Hermann Tilke, the architect of the Formula 1 circuits: "Together with Omega and Formula Sochi we are deeply involved in the Russian Grand Prix project and we are glad that all works are going according to schedule considering the large amount of coordination necessary with the Olympic construction. There is no doubt that the circuit will be meeting all the requirements for Formula One and maybe also for the Moto GP. The circuit is going to be very fast and technical and offering a number of interesting features. It is a fantastic facility with a great atmosphere and it will be outstanding as the circuit will run through the Olympic Park. I am very optimistic about the future of the unique race track in Sochi and am looking forward to a triumphant start of Formula 1 in Russia." 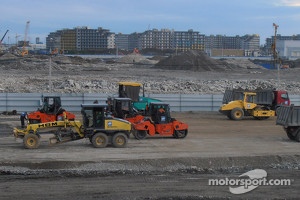 The circuit integration into Olympic Park infrastructure being built for the 2014 Winter Olympics is one of the key features of the Russian racing track. Many massive Olympic venues are already built, some sport facilities have been put in commission, while the motorsport venue is in the active phase of construction. Construction crews are making good progress with the preparing of groundworks and laying of asphalt coat; first layer of pavement has been laid in some areas.

The track, twisted in a clockwise direction and consisting of l2 right and 6 left turns, will be а great combination of speed and technical sections. The Formula 1 car will develop the maximum speed of 321 km/h in a straight between the first and second turns of the total length of about 650 m. The average lap speed is 215 km / h.

Works on the construction of Race Control building, connected to Pit Building, are in its final stage. Pit Building consists of the main level with 33 pits, with three floors of rooms and VIP lounges, and a roof terrace. The main part of the second floor is occupied by press center and podium. Parts of the second, third and fourth floors and the roof terrace are dedicated to Paddock Club. In the spring of 2013 exterior and interior works and installation works will begin. 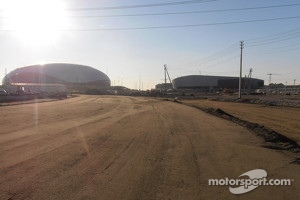 Main grandstand, being built opposite the boxes, is expected to host 13,600 race fans. The soil stabilization works with use of the latest technology, developed and successfully implemented by local specialists, are completed. Commentator booths are situated on the top floor of the grandstand.

The circuit infrastructure involves elevators and other accommodations for people with disabilities, creating a barrier-free environment to the highest standards.

McLaren: Changes ahead for 2013