The Formula 1 paddock came together on Saturday night in Abu Dhabi to celebrate Sebastian Vettel's career and bid farewell with a group track run.

Ahead of his final grand prix start on Sunday, Vettel organised a group track run event - called ‘Run With Seb’ - for everyone working in the F1 paddock.

Around 200 people took part in the group event, with Vettel inviting people to run, walk, or even hitch a lift on the back of a flatbed tour truck that went around the circuit.

Vettel was joined on the run by Haas driver Mick Schumacher, the duo completing most of the lap together, while Ferrari’s Charles Leclerc attended the start for the group picture along with F1 CEO Stefano Domenicali.

Attendees were handed special t-shirts for the run reading “Danke Seb” and with a graphic of Vettel bowing before his Red Bull RB9 car after clinching his fourth world title at the Indian Grand Prix in 2013.

“Run at your own pace, take it easy, go as fast as you like - it’s just a nice thing to do together,” Vettel said ahead of the start.

“Thank you Formula 1 for all these years, and thank you to all the people in the paddock. We travel the whole year together, I thought it was just a nice idea to invite everyone.”

To accompany people running around the 5.2km Yas Marina Circuit, Vettel’s father, Norbert, plugged his iPod into the circuit PA system and played songs such as Wonderwall and Don’t Look Back In Anger by Oasis, Drops of Jupiter by Train and Blitzkrieg Bop by The Ramones.

Vettel hung around until the very end of the run to clap people home as they crossed the line before chatting with participants, posing for pictures and even signing some t-shirts and passes.

Aston Martin also arranged a special drinks event for the paddock ahead of the run, which included customised bottles of Peroni beer that read “Grazie Seb”. There was also a placard for people to sign and leave messages to Vettel, thanking him for his F1 contributions over the years.

Vettel’s former teams, Red Bull and Ferrari, have also held events for the German driver this weekend. Ferrari gave Vettel a signed engine cover in a presentation during which he spoke in Italian to the team, while Red Bull also held a small event to gift him a signed rear wing endplate. 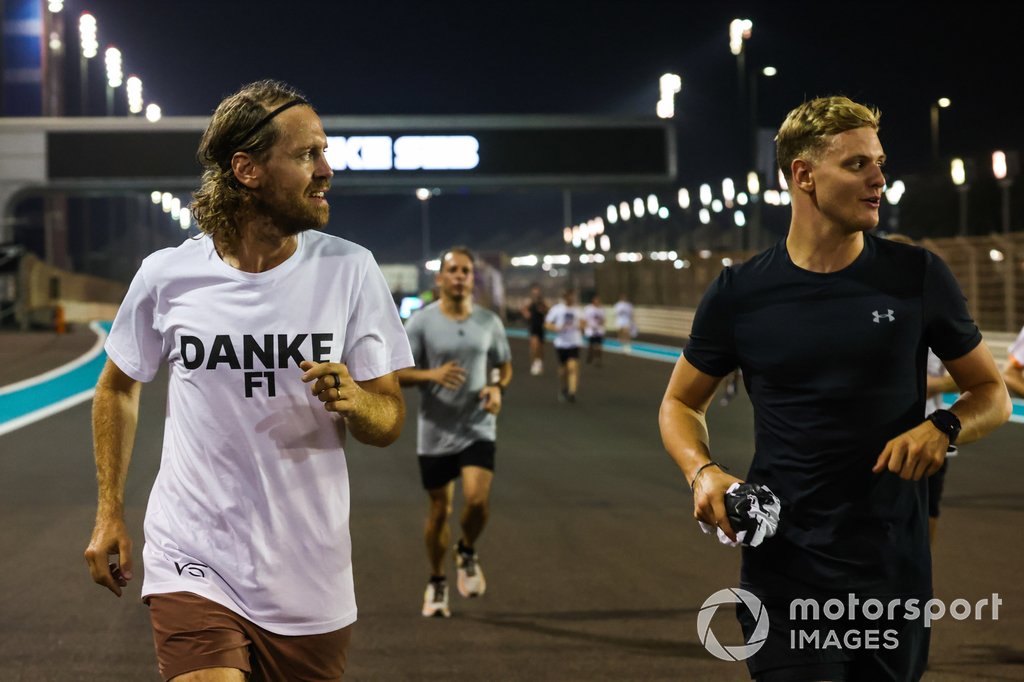 Sebastian Vettel, Aston Martin, is joined on a run around the circuit by Mick Schumacher, Haas F1 Team, well wishers as part of his farewell at his final Grand Prix