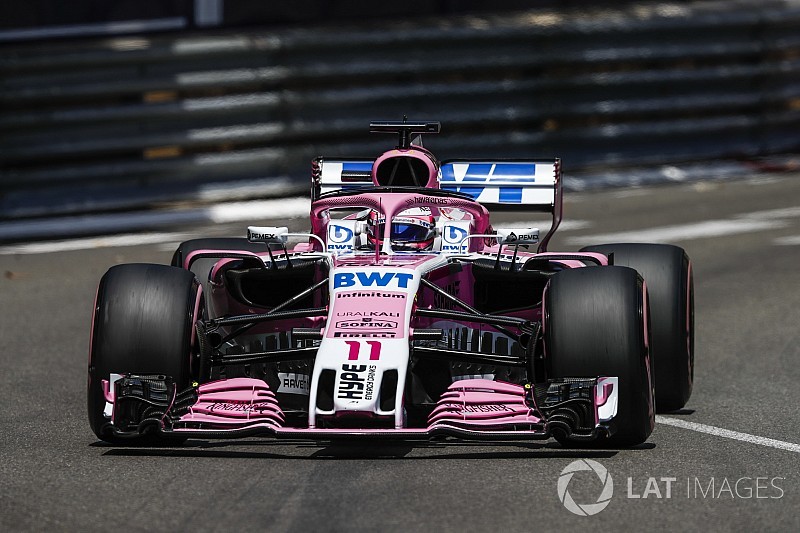 Force India is on course to race its new front wing by the French Grand Prix at the latest, as it plays catch-up with its 2018 developments.

Although the Silverstone-based outfit endured a difficult start to the season, it has begun to make progress with its car – and received a morale boost with Sergio Perez's podium finish in the Azerbaijan Grand Prix.

The next step will be to debut a new front wing, which has been delayed while the team ensures there are enough spares to allow both drivers to have it.

There is a chance the wing could be used in Canada this weekend, but if that does not happen then it will definitely be ready for the race after in France.

Technical director Andy Green said: "We think now it is ready to race, we just don't have enough of them. We didn't want to risk the wings until we have some coming through, which will at the latest be Paul Ricard."

Green said that testing of the new front wing after the Spanish Grand Prix had delivered some encouraging results.

"We did a lot of testing of it in the post Barcelona test, and that proved to us that it was at a high enough level now that we want it on the car," he explained.

"Around Barcelona it was a good step forward. So we would be confident then, with the updates we are bringing in Paul Ricard, that we should take another reasonable step."

Perez talked recently about the team needing to make compromises with its set-up so far this year to compensate for the rear end stability issues it has suffered.

Green says that as well as that issue clouding things on track, there have been other factors back at base that have slowed things down.

"I think part of the issue was not having the car that we wanted at the beginning of the year," he said. "Checo talks about compromises as far as setup is concerned, but we have compromises in terms of manufacturing as well.

"So, there were parts that we really wanted on the car that we couldn't have, so we had to wait."

When asked whether that was a time issue, Green replied: "It was budget related."

How Formula 1's forgotten man is back in fashion