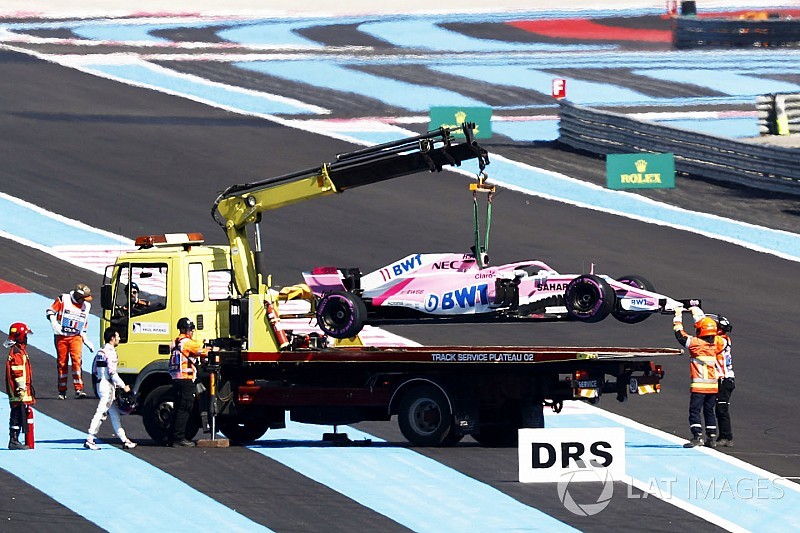 The Force India Formula 1 team has been fined after Sergio Perez lost a wheel during practice for the French Grand Prix.

A €15,000 fine, and additional €85,000 penalty that is suspended for 12 months, was dished out by FIA stewards following a Saturday morning investigation into the incident that occurred in Friday’s second practice session.

Perez lost his left-rear wheel at high speed in FP2 with the wheelnut and its retention device still attached to the wheel.

The FIA’s initial analysis suggested some form of debris might have caused the wheel to not be properly located on the hub, while team chief operating officer Otmar Szafnauer suggested it could have been a retaining bolt problem.

Their report said the high-speed nature of the incident made it “very serious and potentially dangerous”, and claimed Bauer revised his original report.

Bauer instead confirmed Szafnauer’s original theory, with the stewards noting that “that the problem was not caused by incorrect or incomplete fitment of the wheel but rather by an assembly fault involving poor seating of three retaining screws on the retaining plate”.

The stewards said there was no error from the wheelgun operator in fitting the wheel or checking its security.

They said it would be “unreasonable” to suggest the appropriate action to stop the car was not taken, because the team and driver had no warning of a problem before the wheel detached.

It continued: “Accordingly and consistent with previous decisions this year, the Stewards decided that the grid place penalty that “may” be imposed under the above article, would not be applied.

“However, it is noted that this is the third incident of this nature involving the team in the
past two years and the second this year, and hence the usual penalty has been significantly increased.

“This fine represents the view of the Stewards that the team needs to investigate its assembly and quality control procedures to ensure this type of potentially dangerous incident does not occur again, and believes the penalty is suitable and will also act as a deterrent in the future.”

Grosjean's engine sent back to Ferrari for checks