Domenicali said he is confident Ferrari will succeed where it failed in 2012.

Jan.4 (GMM) The opening races of this season's world championship will be crucial, according to Ferrari team boss Stefano Domenicali.

In 2012, runner-up Ferrari had a dire start to its campaign, while eventual champion Red Bull also took some time to establish its full potential. 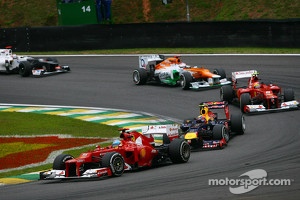 But with the sweeping rule changes of 2014 looming large, Domenicali said the dynamics of this season's battle will be different.

"Next season (2013) will be decided in the first races," he is quoted by Germany's Auto Motor und Sport.

"The teams will do their work for 2013 and then move on to the preparations for 2014," the Italian added.

"I think this switch will happen in July, so you will need to start the year well."

Referring to the 2014 rules, featuring the move from V8 to turbo V6 engines, Williams' technical director Mike Coughlan confirmed: "It's a huge change.

"There are very few teams who will be able to do a fully-focused run on the 2013 championship and the year after," he is quoted by the Sun newspaper.

However, Domenicali said he is confident Ferrari will succeed where it failed in 2012.

"What happened to us last year in the Jerez test will not be repeated this year," he insisted.

"Now we are sure that the wind tunnel will not give us surprises," added Domenicali, referring to the closure of the Maranello facility for a revamp, and Ferrari's looming exclusive work in Toyota's state-of-the-art Cologne tunnel.