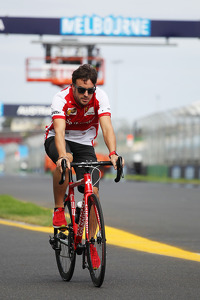 Fernando Alonso, Ferrari rides the circuit on his bicycle

And according to the Catalan daily El Periodico, "Fiat could become the title sponsor".

Meanwhile, a cyclist with a F1-sounding name has also been linked with Alonso's new team -- American Chris Horner.