The FIA will analyse the stretched seatbelts that resulted in Carlos Sainz being thrown forwards in his Ferrari Formula 1 cockpit when he crashed at Monza.

Sainz spun in to the wall at the Ascari Chicane during second free practice on Saturday morning, which resulted in a pretty hefty impact.

Onboard footage of the incident highlighted how big the impact was, with Sainz being thrown quite far forwards towards his steering wheel.

Ferrari is currently conducting its own investigation into the accident using the mandatory FIA high-speed cockpit cameras, as well as other telemetry data, to get a full picture of the incident and its aftermath.

And while it is unclear at the moment whether or not Sainz's helmet made contact with the steering wheel, that should become clear from any analysis that Ferrari and the FIA conduct.

The manner in which Sainz was thrown forward in the crash caused some alarm from observers, because it seemed so unusual.

However, the FIA says that it is normal for seatbelts to give a little in impacts as that is safer for the human body than then being entirely rigid.

F1 race director Michael Masi explained: "I think the belts are made to stretch.

"You've got a human body in there, so there's got to be some give. You can't just keep everyone completely tied in because there has to be a bit of give in things.

"So we will look the belt stretch, as we do with any major incident, or significant incident like that, and see what we can learn from it. You know, can it be improved? Let's have a look?" 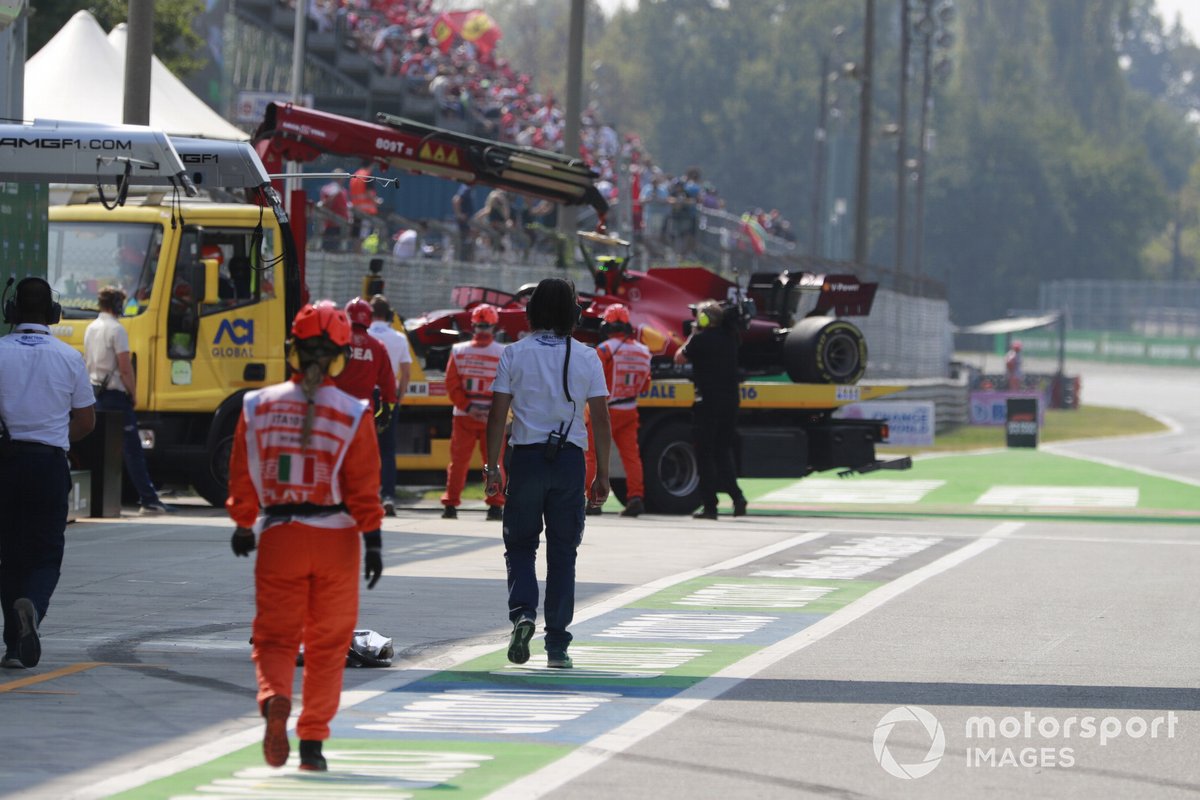 Marshals return the car of Carlos Sainz Jr., Ferrari SF21, to the pits

Asked if there was an element of the belts perhaps stretching too much in Sainz's case, Masi said: "Possibly. And let's try and learn from it."

While some had suggested Sainz's HANS has come loose in the crash, the Spaniard himself was clear that was not the case. Photos after the incident also showed his HANS straps in place.

"No it didn't," said Sainz at suggestions that HANS straps had snapped. "It was just that the impact was so heavy that my head went forward a lot and I took a bit of the belts with me, but not the HANS."

The FIA says investigating accidents after each F1 weekend was an essential process in helping drive forward further safety improvements.

Masi added: "I'm always encouraged by all of the safety features and the ever improvement with safety that we have.

"You look at Carlos's incident in FP2. Although it didn't look like much, it was quite a severe impact.

"Be it halo, be it equipment, be it car design, everything, there's always that constant evolution of improving safety as a whole."