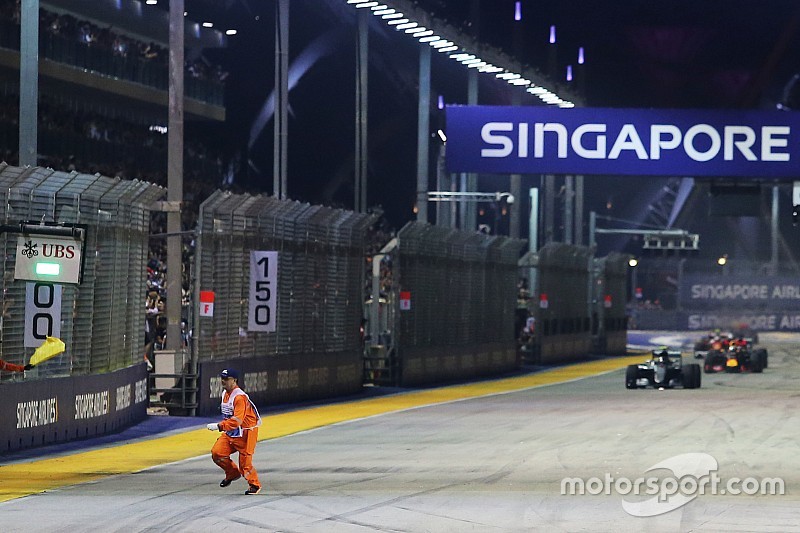 The FIA has begun an investigation into why a breakdown in procedures at the Singapore Grand Prix resulted in a marshal being left out on track after a safety car restart.

The safety car had been called out following a startline incident that left Nico Hulkenberg's Force India stranded on the start/finish straight. But the caution period only lasted for one lap and the cars were released again for the start of lap three.

As race leader Nico Rosberg approached the first corner, however, a marshal was having to run for cover after he had ventured on to the circuit to pick up a piece of debris.

An FIA spokesman explained to Motorsport.com that the situation occurred despite normal protocol being called of race control confirming three times with the clerk of the course that the track is clear.

Somehow, despite the repeated assurances, the marshal was allowed on to the track at the same time the safety car released the pack.

A report will be prepared to examine exactly how the miscommunication happened, so that lessons can be learned to ensure no repeat in the future.

The FIA spokesman said: "We want to clarify the situation to avoid it happening again."

Twelve months on from the incident when a spectator wandered on to the circuit and brought out a safety car, the matter was not taken lightly by those involved.

Mercedes motorsport boss Toto Wolff said he was just thankful that nobody had got hurt in the incident.

"Wow!" he said. "Last year's guy was drunk at least! I don't think this guy had such a good time out there.

"It was very dangerous but I think we must give credit to race control, because they restarted the race pretty quickly. This is what we have asked them – not to spend endless time behind the safety car.

"And that probably triggered one of the marshals being out there, cleaning up the mess. These things happen and I am really happy that it ended up with no one being hurt."

Rosberg admitted that he had had to slow down a little when he saw the marshal, but says there was no major alarm about what had happened

"Yeah, that was pretty hairy, for sure," he said. "I think just as we didn't expect the restart, he didn't either, I think, because the restart was somehow pretty abrupt.

"But he got out of the way just about in time so it was OK. Of course we all had to drive a bit carefully through there."

He later added: "It was not a nice experience to see someone running across when I'm arriving at 300 km/h, so I made sure I drove through safely, and that's it. For sure I lost some time, definitely."

Lewis Hamilton, who had been eyeing up a move on Daniel Ricciardo before the yellow warning flag appeared said: "It made no difference [to restart]. I didn't see him until he was alongside me."

Verstappen: Team knew in advance start would be "difficult"