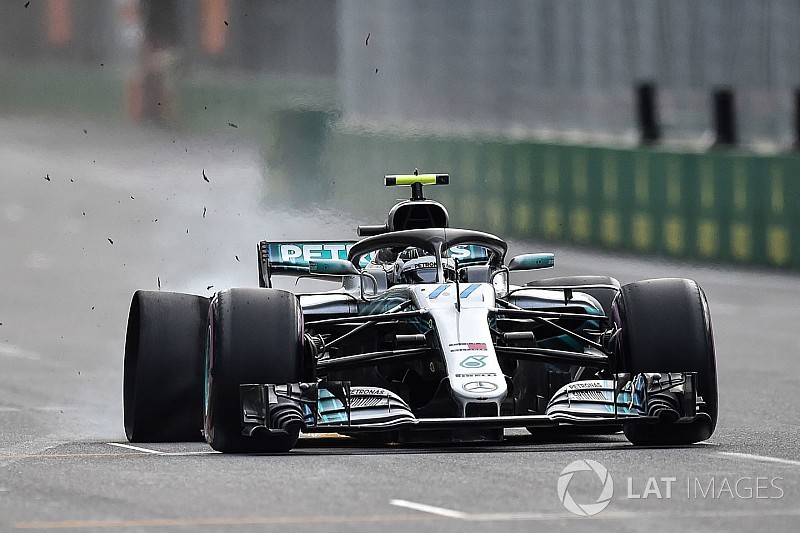 Formula 1 race director Charlie Whiting says the FIA was not made aware of the debris that cost Valtteri Bottas victory in Formula 1's Azerbaijan Grand Prix.

Bottas suffered a heartbreaking puncture after he hit a piece of debris with three laps to go, having taken the lead from Sebastian Vettel due to making his pitstop under safety car conditions, and then surviving an attack from the Ferrari on the restart.

Mercedes boss Toto Wolff said "these things shouldn't be on the track when we have six laps behind the safety car", claiming the debris Bottas hit was "the size of a fist", but Whiting said he was not notified about the piece in question.

"We didn't get any reports of debris," he said. "For the whole race the marshals have been remarkable, they really were very good on reporting debris.

"It probably happened between [Pierre] Gasly and [Kevin] Magnussen, the incident they had, but we didn't have any reports of debris there.

"Of course we always try to keep the track clear of debris, but it's a little difficult to clean up if you don't know about it.

"We had been having continual reports of debris throughout the whole race and we were dealing with it, and I felt we had dealt with every bit of debris on track.

"When the race restarted, we were pretty confident that everything was clear on the track.

"I'm perfectly at ease with the decisions that were made around that safety car intervention."

Wolff added that it was "brutal" for Bottas to lose the race in that manner.

"Valtteri's race came towards him, and obviously we knew that staying out would give opportunities with the safety car and that's what we did," he said of the strategy that enabled Bottas to snatch the lead from Vettel.

"Then it's just very brutal for him to lose what looked to be an easy win, with a piece of debris on the track.

"Luck is a part of sport. The safety car went against us in the past and today it gave us a win [with Lewis Hamilton].

"But it still doesn't feel right, for two reasons: the first reason is that we lacked the pace, and the second reason is that the quickest guy on track DNF'd because of a puncture that was caused by debris on the track."

Red Bull had discussed clash prospect before the race