Masi had no choice over safety car for "stuck" Mercedes 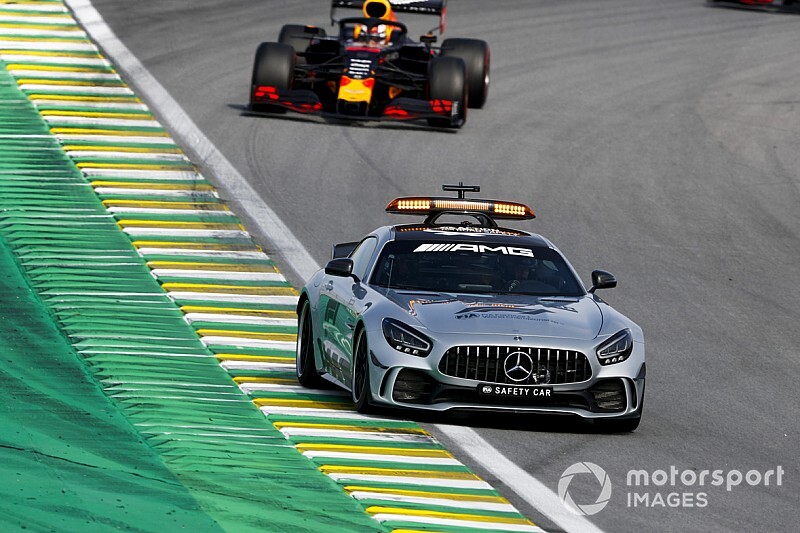 Formula 1 race director Michael Masi says the safety car deployed when Valtteri Bottas retired his Mercedes in Brazil was a standard reaction to the use of a recovery crane.

Bottas pulled off with an engine failure and in response to a message from his engineer coasted to a gap in the barrier where he thought his car could easily be pulled out of harm’s way.

Onboard TV footage showed that after vacating the cockpit he struggled to re-fit the steering wheel, before leaving it in the car and climbing over the barrier.

Two marshals subsequently picked it up and eventually managed to re-fit it, and then appeared to be trying to put the car in neutral. However, as they couldn’t move the car, a crane was required.

Since Jules Bianchi’s crash at Suzuka any deployment of a crane obliges race control to deploy a full safety car, in order to properly slow the field – even when the car is on the inside of a corner and the crane only briefly appears outside the protection of the barriers, as was the case on this occasion.

“Valtteri did a fantastic job where he stopped,” said Masi. “They were trying to push the car back into the gap, which is why we went double yellow, as we had the marshals there.

“It was off track, they were trying to push the car, but the car got stuck on the bump. So we actually had to deploy the crane to move it out, so for me as soon as a crane is deployed, that's it, straight safety car.”

Asked if there was an issue with the car not being in neutral, Masi said: “The marshal said it was stuck on the bump and left it at that. And obviously as soon as I have to use a crane, it completely changes it. Being off-track was why I covered it under a double[-waved] yellow flag originally.”

Although Bottas’s car and the crane were behind the barrier very quickly, the safety car period dragged out to several laps in part because so many lapped cars were required to pass the leaders, in order to get their laps back.

“Basically I think it was only the top five cars were the only unlapped cars,” said Masi. “Probably the first part of it was actually getting the leader behind the safety car, which took a little bit longer purely because of car positioning, and then getting the list from timing of all the cars.

“So the first focus is obviously to clear the incident. And then the unlapping of cars is a secondary scenario.”