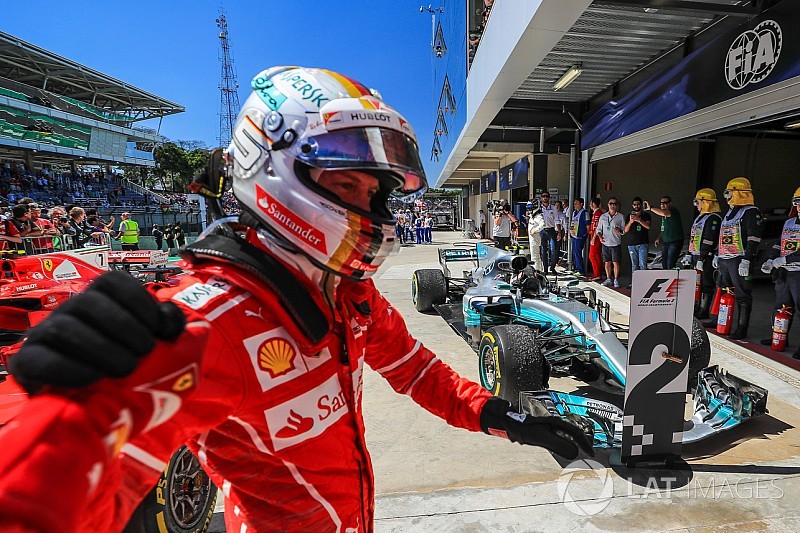 James Allen gives his take on the Brazilian Grand Prix, as Sebastian Vettel and Ferrari bounced back from their disappointment in Mexico.

This was a good win for Ferrari, and a painful loss for Valtteri Bottas and Mercedes. They had defied expectations on Saturday by beating Sebastian Vettel to pole position, after the German had set the provisional pole time.

But on Sunday, the race was all about the start. Vettel got the better launch and that was enough to give him a run on Bottas, as the pole is on the outside at Interlagos.

Red Bull’s Max Verstappen wasn’t able to make the attack into Turn 1 that we saw in Mexico because his fourth place grid slot is notorious for the double painted while start line that is just in front of the rear tyres. That takes the edge of the grip. 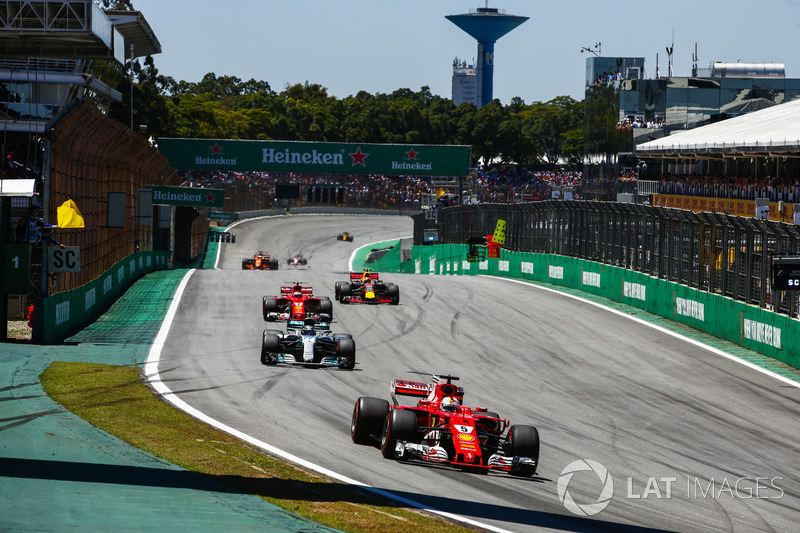 So Vettel had control of the race in the opening stint and Bottas never looked like he had an answer.

Mercedes made a speculative attempt at an undercut on Lap 27 but the margin needed this weekend with these Pirelli tyres was very small, as little as 0.6s, so Vettel had it covered and pitted a lap later.

The win is Vettel’s fifth of the season, which is encouraging for the Scuderia as is the fact that they have produced a car capable of qualifying on pole and they’ve succeeded in developing it throughout the season.

As a benchmark for next year, that’s pretty good. All eyes will be on Mercedes to see whether they persist with the long wheelbase treatment or do something different for next year.

Red Bull is finishing the season strongly (even if here their engine deficit was more obvious) and will surely be in the hunt next season for regular wins. 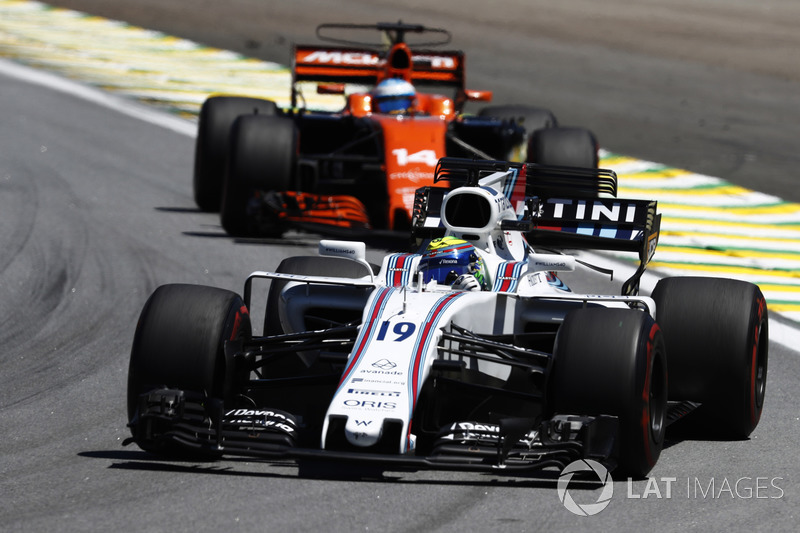 Felipe Massa had a disappointing race last year, crashing out his Williams in the rain, but today he put up a good fight against Fernando Alonso in the McLaren, holding him and Force India’s Sergio Perez off to the flag.

Massa started behind both on the grid, but got a good start and when Perez and Alonso had an altercation he was there to nip past Perez. He nailed Alonso at the restart after the Safety Car and McLaren didn’t try to undercut him at the pit stops. In fact Alonso came in a lap later.

Perez, meanwhile, tried to get back on terms with an odd strategy that saw him run longer than both, but he lost time and wasn’t able to do anything with the tyre offset he had. 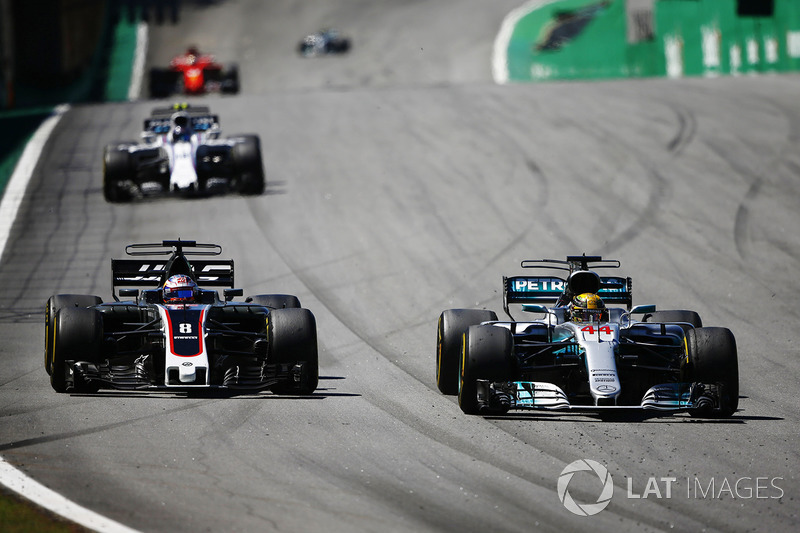 Hamilton revels in the power of new engine

Lewis Hamilton certainly brightened up the race with a ferocious drive from the pit lane to fourth. He led for a while, the first time anyone has done that from a pit lane start since he did it himself in 2014.

He made many overtakes, thanks to having the opportunity to fit a ‘Series V’ engine, or at least a new unit which was not of the same specification as the previous one.

It was well worth it as it gave him great overtaking opportunities here and will set him up for a dominant weekend in Abu Dhabi, given that everyone else will be on the limit on engines at the end of the season.

At times, with everything turned up, he was as much as 25km/h faster than the car he was overtaking, with DRS and a tow.

It is rarer for a driver to get the chance to do that with the modern power-unit formula and next year they will have to be even more sparing with only three engines to last the season.

His challenge for the podium foundered on two moments; the second time he had to pass Lance Stroll and lost time, and then repeated late-race lock-ups into Turn 1.

Although these were a sign that the supersoft tyres were beginning to go, they also took the edge off the attack on Raikkonen in the closing laps.

The Ferrari had better pace in the middle sector and that meant that Raikkonen started the long run up the hill with enough margin to keep Hamilton at arm’s length. 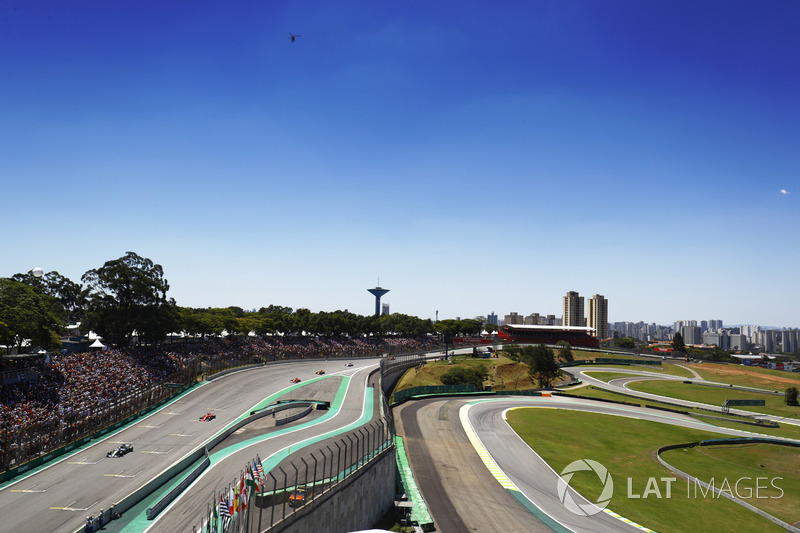