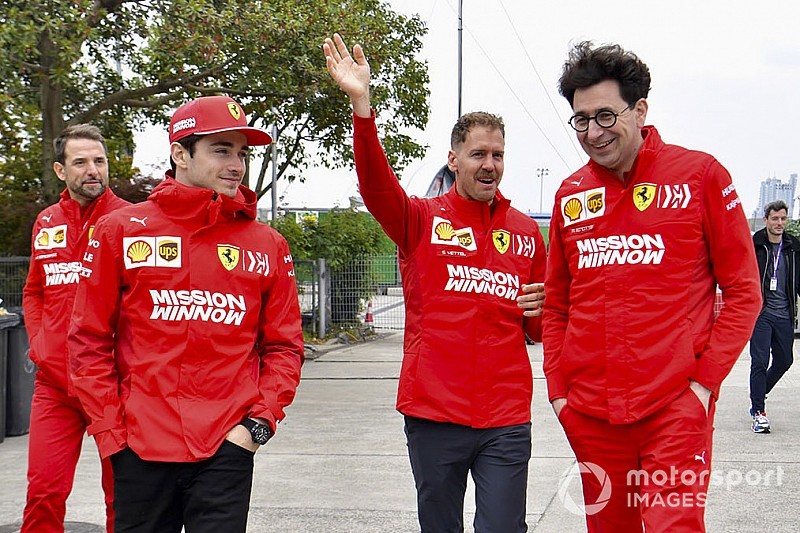 Ferrari will continue to prioritise Sebastian Vettel over Charles Leclerc in "50/50 situations" as it is convinced the German still has "the most probability" to fight for the Formula 1 title.

Team principal Mattia Binotto has stressed, however, that his drivers remain free to fight, and that the team's position could be revised later in the season.

"Certainly as a team we need to give the priority to the team, and try to maximise the team's points at the end of the race,” Binotto said.

“And as I said at the start of the season, if there is any 50/50 situation where we need to take a decision, the advantage would have been given to Sebastian simply because Sebastian has got most of the experience in the team, in F1.

"He won four championships, and certainly for us he is the driver who's got most probability to challenge for the title.

“If, as something we agreed with both drivers, in few races’ time, things may change, for whatever reasons – bad luck or whatever could be the situation – we may change our position on that.

“But on the track they are free to fight, on the track I think if there is one driver who is certainly faster he will get the advantage.

Leclerc is currently ahead of Vettel in the drivers' championship following his Bahrain performance, despite the engine problem costing him a likely win.

Binotto says he was even "more happy" about Leclerc's level-headed reaction to the issue than about the Monegasque's strong performance at Sakhir.

"Losing was tough, but even more probably frustrating. But that has given us even more of a boost for the following races and for here in China," Binotto said. “To Charles, what I told him is that I think he did a great quali and great race, but more than that I think he has been fantastic in the post-race comments.

“It shows that he is a really mature driver. So I simply told him ‘good job,’ but I’m more happy for what he did after the race than during the entire weekend. And that’s enough, because all of us are simply looking ahead and at the next challenge.”