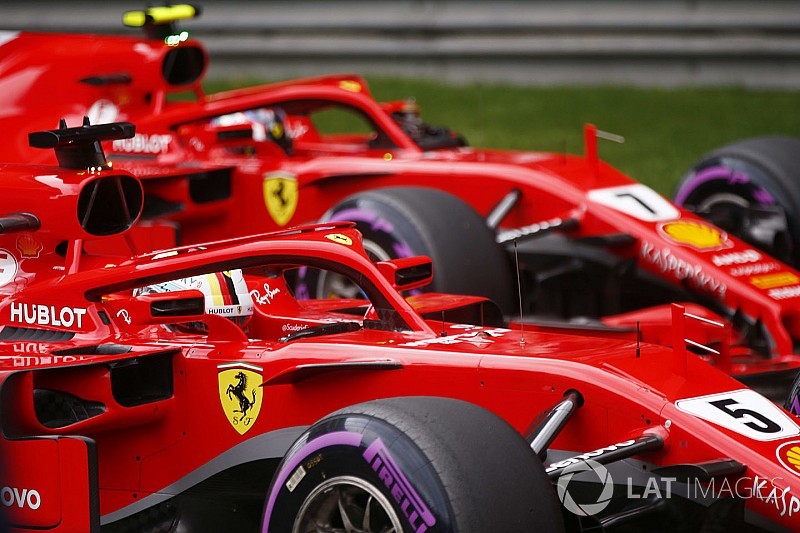 Formula 1's chief technical officer Pat Symonds believes that Ferrari has already decided to back Sebastian Vettel over Kimi Rakkonen in this year's title fight, based on the strategy handed to the Finn in China.

Raikkonen was kept out of the pits in an attempt to help his teammate's race, a ploy that the Maranello team has used on occasion in the recent past.

Ironically in Shanghai the safety car and subsequent incidents resulted in Raikkonen finishing third, while Vettel was only eighth.

Former Benetton and Renault technical director Symonds says that such strategies will not help Ferrari's chances of winning the constructors' title.

"I think they need to decide how they're going to go racing," Symonds said in an F1 interview.

"I think that the way they used Raikkonen in China was unfortunate – leaving him out for so long and trying to slow down other cars.

"And to be honest, it didn't really work. By the time his rivals reached him, his tyres were shot and they could easily overtake, so it wasn't a great strategic decision.

"I don't think that's the way to get a constructors' championship. They obviously feel that the drivers' championship is more important, and they've made their decision as to where that will go."

Symonds believes that the team is in better shape than it has been since the hybrid era began.

"In pre-season I think we hoped that Ferrari would be close to Mercedes but we felt that Mercedes had something in hand," he added. "Well, the first few races haven't really shown that.

"Ferrari have had had consistent performance. They have a reasonable qualifying performance and a very good race pace. They are looking stronger than they've looked for many years and I think they've got every chance of a really good season."

Symonds also reckons that stronger competition has put a spotlight on a long-time weakness in tyre management at Mercedes.

He pointed out that it was apparent in the last days of the V8 era, and was hidden by the overall form of the package after the current hybrid power units were introduced in 2014.

"If you look back at the recent history of Mercedes, one thing that they've never quite got on top of is tyre management," he explained.

"I think things were masked from 2014 to 2016, simply because they had this big power advantage.

"Then, last year we started to hear the car being called a 'diva'. What's that about? In my mind, the difference in performance you get from one weekend to the next is not really explainable in aerodynamics or vehicle dynamics or anything like that.

"With an aero/chassis package, getting your set-up just right might mean you're hoping to pick up a tenth or so from Friday to Saturday qualifying.

Symonds also pinpointed strategy as a weakness that the stronger opposition has revealed at the Brackley team.

"Strategically, they've also had troubles," he said. "When you have a fast car and you're controlling the race, the strategy comes to you.

"But recently with Mercedes we've seen some... I won't call them wrong, but I would say some imperfect strategy calls. I think that's because there may have been imperfect calls before, but with such a performance advantage you don't really see them."