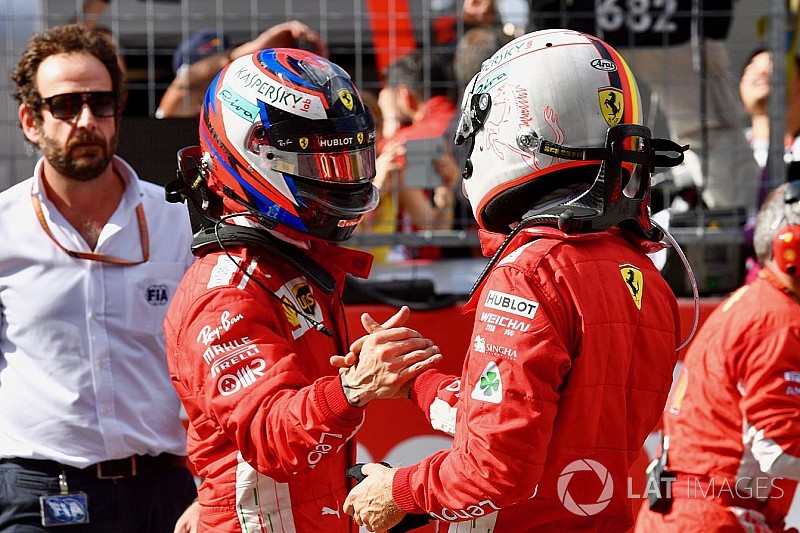 Ferrari would have been "brutal" had it switched Kimi Raikkonen and Sebastian Vettel's places with team orders in the Austrian Grand Prix, says Mercedes Formula 1 boss Toto Wolff.

Vettel retook the F1 championship lead from Mercedes' Lewis Hamilton by one point with third place behind Raikkonen on a day when both Mercedes retired.

Having been as low as eighth thanks to a grid penalty for impeding Carlos Sainz and then two first-lap errors, Vettel came back through the field and was closing on Raikkonen in the final part of the race as both chased race winner Max Verstappen.

Ferrari elected not to ask Raikkonen to cede second place to give Vettel an extra three points, despite the Finn being out of realistic title contention, in a decision Wolff applauded.

"We wouldn't have and I'm not surprised that they didn't," he said.

"I think for the sake of the sport and the fans and the drivers, at that stage in the season, the beginning of July, switching drivers is quite a brutal call."

Vettel got within 1.6 seconds of Raikkonen, but made clear he never anticipated team help - saying "no, why?" when asked by Sky Sports F1 if he had expected a place swap.

"Kimi did everything he could [to catch Verstappen]," Vettel added.

Raikkonen's second place moved him up to third in the drivers' championship, but he remains 45 points behind Vettel and is expected to lose his Ferrari seat to Charles Leclerc next year.

Asked if he was relieved that Ferrari refrained from team orders, Wolff replied: "There is not much to be relieved about from this race. It's been painful overall."

Ferrari's double podium moved it into a 10-point constructors' championship lead over Mercedes, whose second driver Valtteri Bottas is now down to sixth in the drivers' standings following his Red Bull Ring retirement.

Bottas is 53 points adrift of teammate Hamilton, but beat him to Austria pole in Mercedes' front row sweep before losing the lead with a poor start.

After qualifying, Wolff had made it clear that Mercedes would not be asking Bottas to perform a number two role.

"We are at race nine, there's a long way to go and I think we owe it to the fans - and it's also the racing mindset that we have - that we won't be playing for a drivers' championship in June or July," he said.

"Obviously towards the end of the season, if you go into the last third of the championship and you see there is a solid advantage for one of the drivers, this is the unfortunate situation within any racing team that you need to look at the situation. But not now."