Emilio Botin, the Spanish banking group's chief, said this week: "We want to continue in F1 for at least ten more years," Marca sports newspaper quoted him as saying.

And Botin said Santander wants to remain hand-in-hand with Fernando Alonso for the same time period.

"I am convinced that, in ten years, Fernando Alonso will be as good as he is today," he insisted. 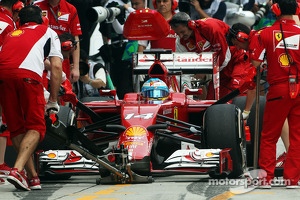 Botin also revealed why he allowed Santander's sponsorship with McLaren to lapse.

"There is only one Ferrari team, period," he said. "We were interested in being with McLaren still because we have a bank in England, but it was a small sponsorship.

"When (Lewis) Hamilton was there it was justified. (Jenson) Button is a great driver, but it's another matter," Botin explained.

He suggested that a difficult start to the 2014 season for Ferrari is not swaying Santander's loyalty.

"The partnership with Ferrari is the best we have had throughout our history," said Botin. "It is the key for Santander being known around the world."

Botin did, however, ask Domenicali when real improvements for Ferrari's 2014 car will arrive.