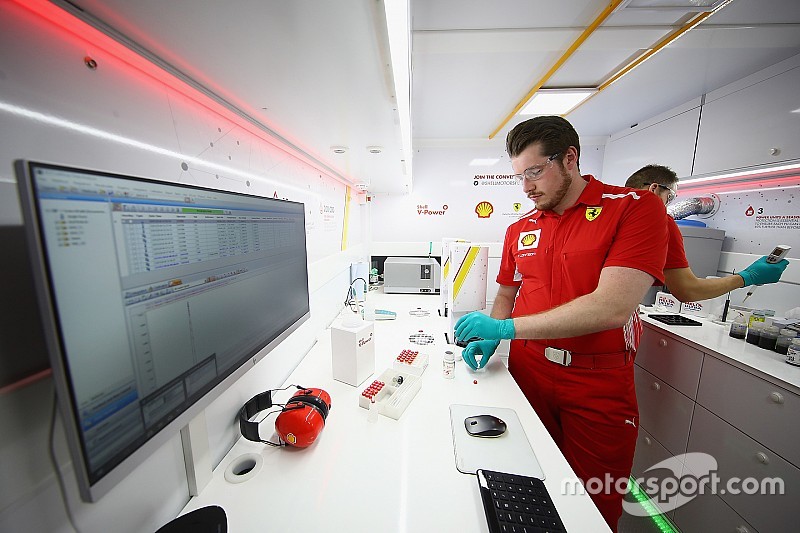 Motorsport.com goes behind the scenes with Shell in the Ferrari garage in Montreal to reveal the forensic tests that keeps Sebastian Vettel’s F1 car on track.

Inside Shell’s trackside laboratory at the Circuit Gilles Villeneuve in Montreal, you’d never think that Sebastian Vettel’s Ferrari Formula 1 car is sat just a few feet away on the other side of the wall.

In here, the environment is strictly controlled to allow for scientific tests. Outside, it’s very tidy and organised, as you’d expect from F1 standards, but it’s still a working garage – with all the controlled bedlam that ensues when it’s ‘go-time’.

Vettel himself will take victory in a few days’ time, but we’re here before Free Practice has even started. He’s in relaxed mood as he chats about the benefits that Shell brings to the team. 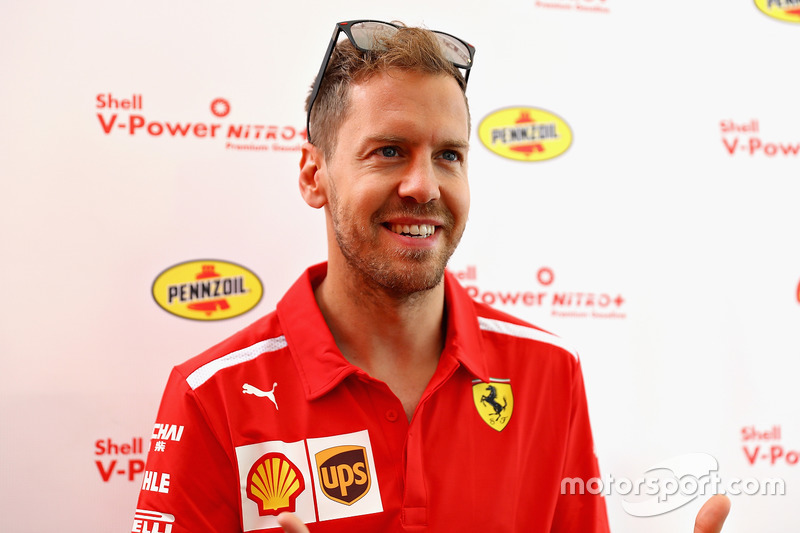 “There’s a sticker on the car, but more importantly they deliver performance to the car,” says Vettel. “It’s a key partner for us, and it’s a very close relationship. The challenges are tremendous, and I’m always asking for more power.

“I wanna go faster, and so do the engineers, but when it comes to developing the whole powertrain, the Shell engineers and scientists are very important. In the lab they’re coming up with new formulas, new fuels, to squeeze out even more power.

“Compared to the past, when you could use whatever you want in the engine, we’re a lot more restricted. We’re only allowed three engines all season, so it’s not just about the power it’s about the reliability. We only have 105 kilos of fuel, so we have to be very efficient, and that’s a big part of the work we do with Shell.

“If you get behind the scenes, it’s really interesting.”

So let’s take Seb’s cue for a closer look at what actually happens in the lab here. Shell brings its ‘flyaway’ version of the trackside lab to all 12 long-haul GPs, which is packed up into a flight box and flown around the world. 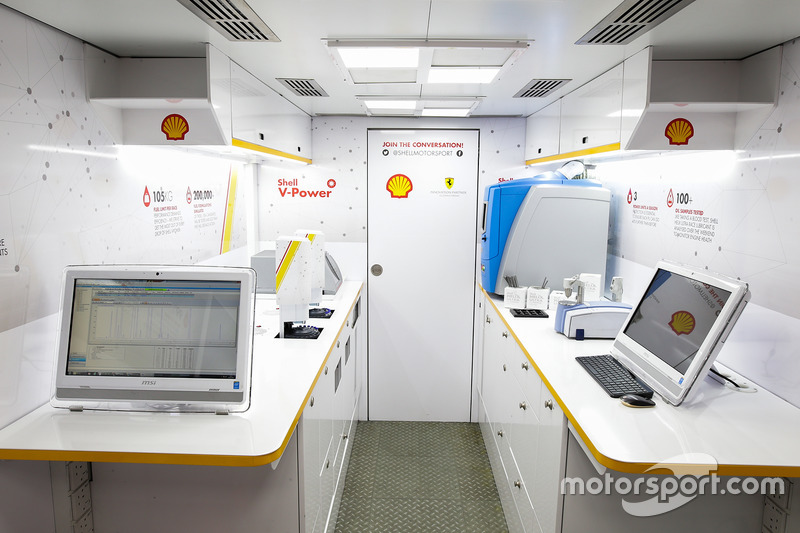 Fuel to the fire

On one side of the room, it’s the fuel testing bench (left in the above photo). Two small gas chromatographs take a digital fingerprint of the fuel, every time the fuel is moved. From being produced and blended in Shell’s technical centre in Hamburg, exhaustive testing is the name of the game to ensure the fuel is exactly as intended.

“When the fuel arrives at the track on Tuesday, we take random samples from the drums,” explains Shell’s Guy Lovett. “Then we check again when the fuel is moved into Ferrari’s rigs in the garage. And then from the rigs into the car, we do another check. We repeat that process every time the fuel is moved all weekend – so that’s over 40 samples every weekend.

“The chromatographs heat up the fuel, which evaporates, so the different components of the fuel distill at different temperatures. The sensors within the instrument detect the individual components, and it comes together in a fuel trace.” 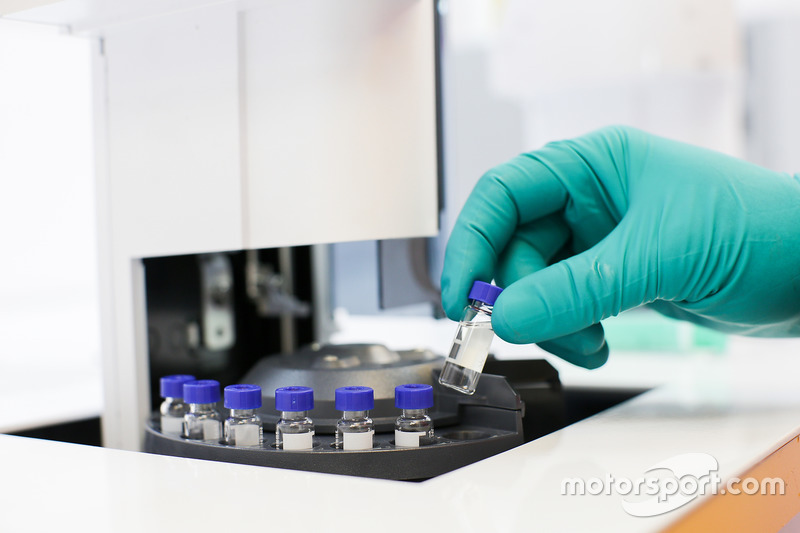 Then it’s over to the computer screen to see the results.

“We overlay a reference [the sample taken at source in Germany] and they should perfectly overlap,” he says. “The peaks are a component, and the size of the peak is how much of that component is in there. The FIA allows us 0.1% of a peak.

“If you’re changing fuel, you can have 10% of the prior fuel in there, but that would be really bad! We design the system to work on that exact fuel, so we strive for 100%. Touch wood, we never see any problems.

“On a Wednesday or Thursday we might see something – let’s say they’ve changed the fuel pump and a speck of dirt got in there. It could be a tiny bit of grease from the back of a mechanic’s glove. But if it gets into the fuel cell, we can pick that up with our analysis.

“The margins on fuel legality are that tight, so that’s why whenever the fuel is moved it is checked that it’s on-spec. If the fuel isn’t legal, you get disqualified, so it’s incredibly important.

“From a quality standpoint, we design a fuel to be in a particular condition, and if it’s not in that condition then we’ve failed.” 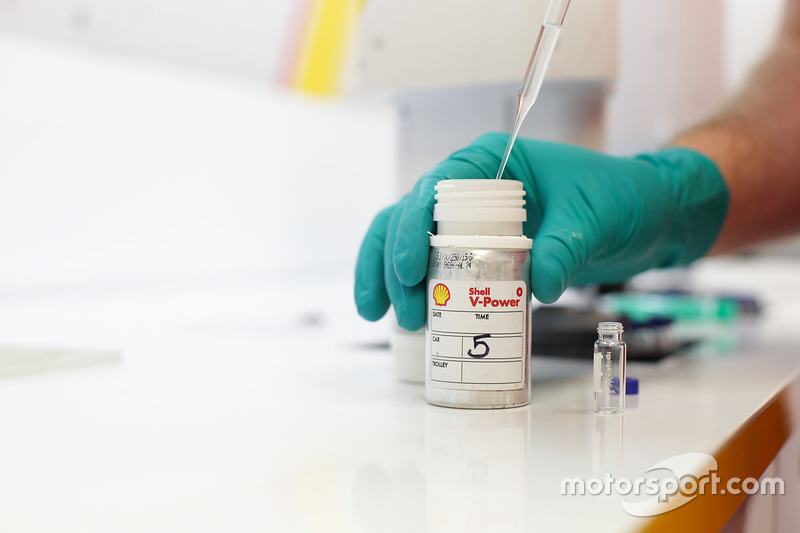 On the other side of this compact and bijou space is the oil testing bench. This time there’s only one machine, but it’s much bigger. So what about the oil itself?

“This is a sample of oil that’s been taken from Sebastian’s car today [Montreal Thursday],” says Lovett, swilling a light brown – almost watery – oil around in a small bottle.

“As you can see, the oil is quite thin: viscosity is one of the key performance levers that we have, so it’s low viscosity, low friction to get high performance. You can’t go too low, inevitably we’d get contact and that means wear, which does bad things in the engine. We’re on a knife-edge of reliability and performance.

“We take a number of samples from [engine] fire-up on Thursdays, just to check everything is OK, and we typically take samples before and after every session too.”

Then it’s over to the machine, a rotating disc electrode. Sounds cool, so what’s it do? 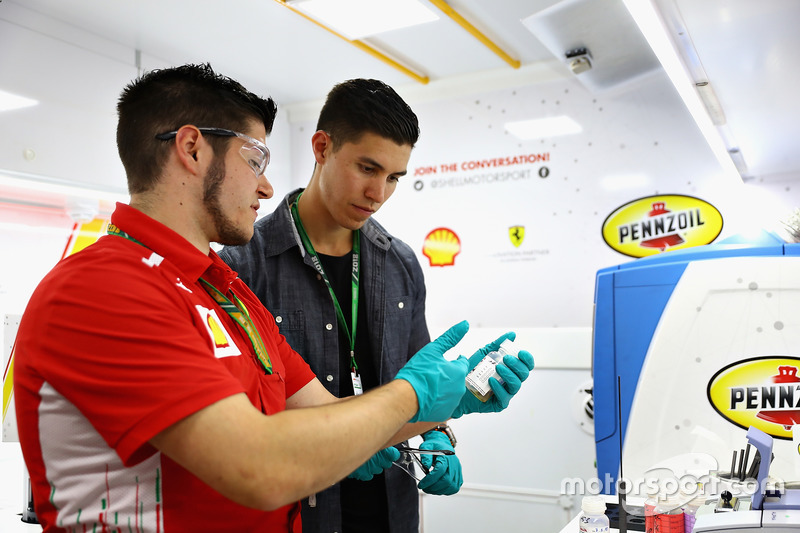 Our oil technician, Roman Brockel, gets to work. He puts the new sample, straight from Vettel’s engine, into a vial and then into the machine. A carbon disc sits on a spindle within a bath of the oil, and as the disc spins it wets the carbon disc – while above it is a carbon rod, with an air gap between them. The machine puts a charge through the rod, so it arcs across the air gap in a pretty sequence of small explosions, like mini lightning bolts.

“This burns the oil, and all its components burn at different temperatures, so you see different coloured flames. Advanced optics detect the colour of the flame, which can deduce what elements are in there, and how much of it there is.”

It burns for 20-30s, with an oddly haunting, shrieking kind of sound.

“Very distinctive, isn’t it? You’ll hear that up and down the pit lane, so now you know what it is!

“It’s the latest generation of this instrument, and we’re able to do some more advanced analysis that before. We compare the measured values against the references, and then we can see what differential there’s been during that session, or since the fire-up.” 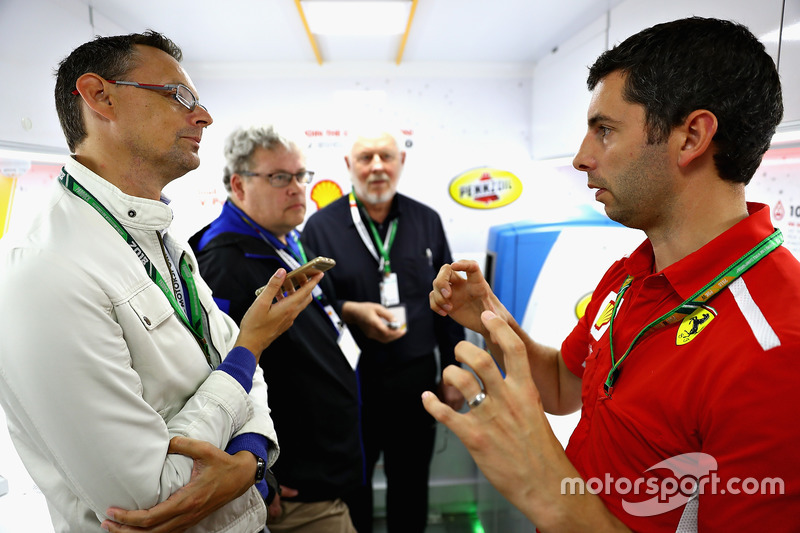 Since the advent of sealed engines, to restrict the numbers used per season, it’s made the testing process harder – but more crucial than ever.

“Once an engine is in service, it’s sealed for its life. Only in very extreme circumstances are you able to change a component within. We can use a medical-style borescope, through an injector port or a spark plug. Your accessibility is pretty poor, so you’re limited in what you can see.

“This data, combined with Ferrari’s telemetry from the car, is the only way of monitoring and assessing the health of the engine once it’s in service.” 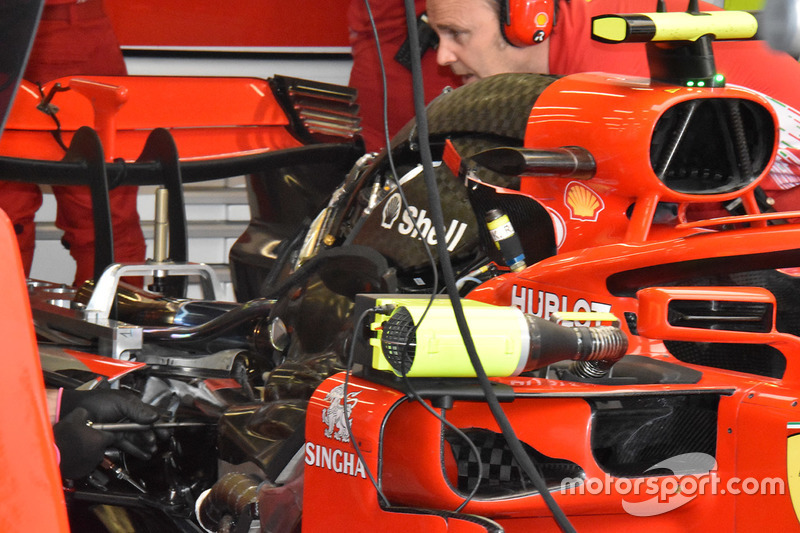 The best kind of medicine is preventative, so how does Shell attempt to predict any potential issues that might arise?

“I think one of our key performance differentiators has been we’ve been working with Ferrari so long,” says Lovett. “We have a huge database, V6, V8, you name it, so we have tens of thousands of data points.

“We utilise that through our statistical models to produce predictions. We know what kilometre distance the engine has covered, how much of each of these elements should be in the oil. We can be very accurate, so the tolerances can be very narrow – so we quite accurately predict if the wear is tracking above or below predictions. Below would also be a problem, because it means we’re not stressing the engine enough. Above the predictions, then you’d suspect a potential problem with the engine.

“We put our data with that from Ferrari’s sensors. That gives us the complete picture, so it’s a predictive technique, if you like.” 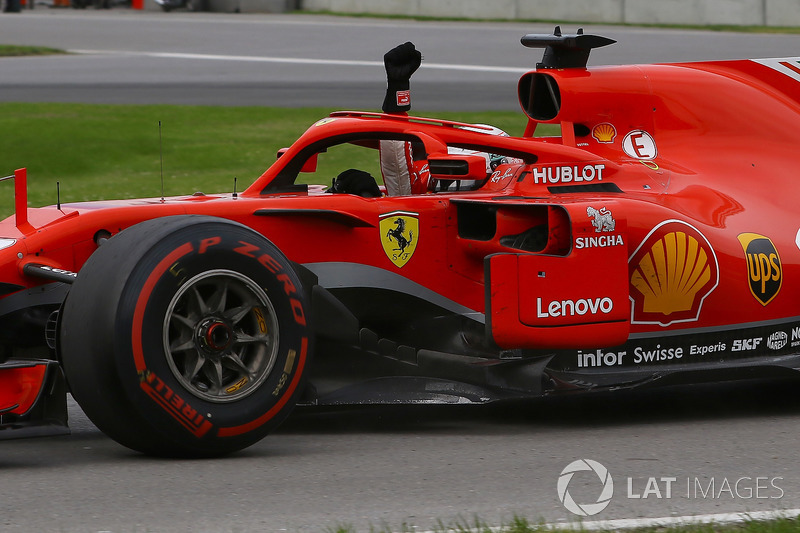 And if there is a problem, how might Shell’s info prove crucial in deciding whether to change an engine or not?

“Because we know what metallurgy occurs at what parts of the engine, we can put together the elements – particularly if there’s an elevated level of a combination of elements – we can decode ‘ok, that suggests it’s from a particular alloy’, and we know where that is.

“If we find that sort of problem, we’d take another oil sample from that part of the engine, purely associated with that system. And, again, decode if there’s an issue in more detail.

“We have sampling points at different locations around the engine. We have a key sampling point outside of the car now, because of the recent rule changes, the FIA can now take random oil samples at any point. That’s to check we’re using the oil we said we were using.

“The FIA at any point of the race weekend can take a sample of fuel or oil, and check using their instruments that it’s A) legal and B) exactly the specification we said we were going to use. If that deviates, then we’ve got a problem.”

But there were no problems in Montreal; instead it was a third victory of the 2018 season and a one-point lead for Vettel to take into France this weekend. Where the whole testing process will start again… 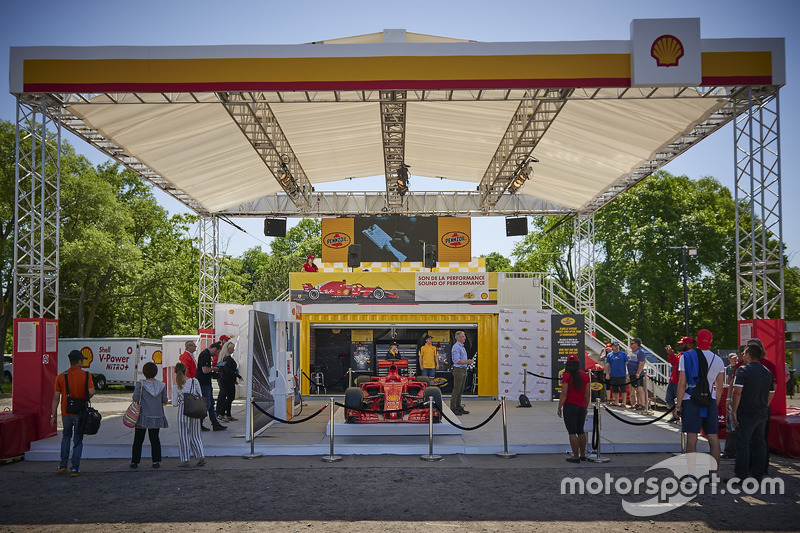 Renault's rate of progress "will say a lot" about F1